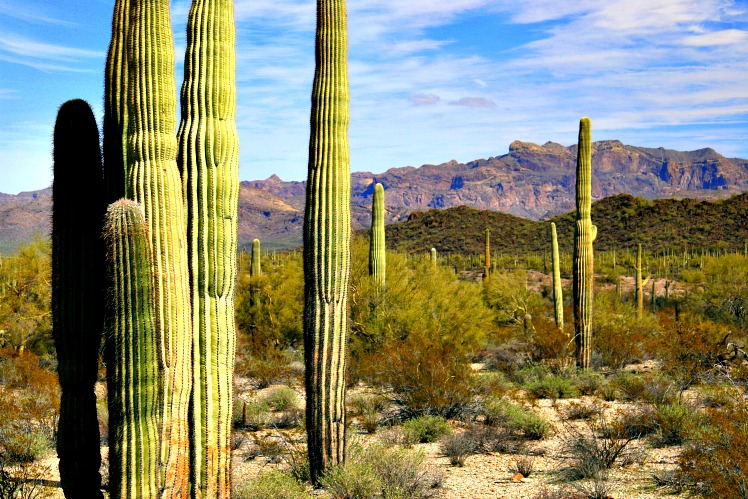 At some point, you’ll get around to explaining how people living in Arizona’s deserts survive the scorch of summer. But you probably won’t be able to hide your bliss about what keeps you and other snowbirds returning winter after winter.

Let’s start with the state’s crown jewel, the Grand Canyon—an iconic attraction that’s on every RVer’s bucket list. It’s hard to imagine a trip to Arizona that doesn’t involve at least a peek at the Grand Canyon. This massive gorge isn’t just a geological marvel, it’s a symbol of Western adventure and American spirit. One look over the edge and it’s easy to see why it’s considered one of the Seven Wonders of the Natural World.

When filmmaker John Ford cast his lens on Monument Valley, he couldn’t look away. The stunning red buttes that rise from the dusty ground are iconic Arizona, and Ford made Monument Valley a backdrop for 10 films, including “Stagecoach” in 1939. Situated on the Navajo Reservation in a remote part of northern Arizona near the Utah line, its glorious skyline draws thousands of tourists to U.S. 163, the only road through Monument Valley.

Sprawled across the state’s 15 counties is a topography as varied as the people who live here. Deserts cover 30 percent of the land, grassland and steppes spread over 53 percent, and highlands make up 17 percent.

Arizona once had petrified wood as far as the eye could see. Visitors arriving on the railroad around the turn of the 20th century took care of that, pocketing what they could and leaving behind enough to justify creation of a national forest.

One of the original U.S. highways, this eclectic drive was established on Nov. 11, 1926, and became one of the most famous roads in America. It started in Chicago and ended in Los Angeles, covering 2,448 miles. Route 66 was immortalized in pop culture by a hit song and 1960s television show before being removed from the national highway system in 1985.

Few geographic formations in the world illustrate such stark contrast as Sky Islands. Visitors to Southern Arizona are often struck by these vast mountain ranges rising suddenly out of the desert and grasslands. Saguaro, prickly pear, and ocotillo rapidly give way to a coniferous  forest, and a much cooler climate. Usually 6,000–8,000 feet in elevation—sometimes exceeding 10,000—these majestic mountains emerge from a sea of desert scrub and provide an oasis for an abundance of wildlife.

Sedona is famous for its scenery, art, and history. Even if you’re not an adherent of the New Age movement, plan on visiting at least one of Sedona’s famous vortexes. They’re at some of the most gorgeous spots around town. Pink Jeeps are ubiquitous in Sedona, shuttling visitors past the sights year-round.

There’s a reason Oak Creek Canyon is the second-most visited canyon in Arizona. In just 15 miles, the drive takes you past countless outstanding vistas. Just make sure the driver’s eyes are on the road — it’s narrow and twisty. Don’t miss Oak Creek Canyon Vista at the top. It has a terrific overview of the canyon.

This national historic landmark was founded by Father Eusebio Kino in 1692. Construction on the White Dove of the Desert, south of downtown Tucson, began in 1783 and was completed in 1797.

The river not only is a major source of water for the state, it is also a prime spot for fishing, rafting, and other recreational activities.

The limestone caves in southeastern Arizona were discovered in 1974 by Gary Tenen and Randy Tufts as they explored the hills near the Whetstone Mountains.

The highest temperature ever recorded in Phoenix — 122 degrees — was enough to temporarily shut down Sky Harbor International Airport on June 26, 1990.

Short or long, straight or steep, hundreds of trails make Arizona an outdoor wonderland for those willing to lace up their boots and explore the outdoors.

Newcomers to Arizona are often struck by Desert Fever. Desert Fever is caused by the spectacular natural beauty and serenity of the area. Early symptoms include a burning desire to make plans for the next trip “south”. There is no apparent cure for snowbirds.