This is the place where the “Summer Spends the Winter” 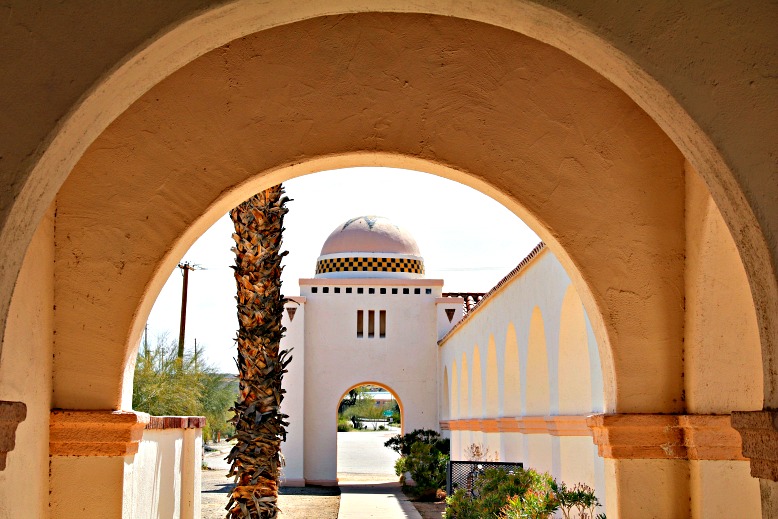 “A Small Town With A Big Back Yard”, the tiny Arizona burg of Ajo (ahh-ho) is situated deep in the Sonoran Desert, 42 miles south of Gila Bend and 37 miles north of the Mexican border.

A discovery worthy of Lewis and Clark, Ajo just might be the “best kept secret in Arizona.” This is the place where the “Summer spends the Winter”, according to the local Chamber of Commerce.

For many snowbirds, as it was for us, Ajo is merely a stopping-off point on the way to Organ Pipe Cactus National Monument. For others, especially Spring Breakers, it’s a town to pass through on their way to Puerto Penasco (Rocky Point).

The town of Ajo reflects its one time wealth to this day. Glistening white churches and a well-designed plaza are so inviting.

Ajo today is a retirement community and snowbird haven along with an increasing number of artists. Ajo’s gorgeous mountain views and charming Old World architecture are enchanting and we soon fell in love with this friendly community in southwestern Arizona.

Ajo got its name from a poor Spanish translation of an Indian word. To make body paint, the local O’odham Indians used copper. Their word for paint was aau’auho, which sounded to the Spanish like the familiar word ajo, meaning garlic in their language. Later, the wild lily plants in the area were named ajo for the flavorful bulb at its roots.

The birthplace of copper mining in Arizona, copper has provided the sinew for this desert town for about 300 years. Ajo was the oldest-known mine site in the state, and until the 1980s Phelps Dodge ran a sizable copper mining operation out of here.

The town of Ajo is worth a good walkabout. Most of the town, and in particular the central plaza, was created by John Campbell Greenway to be a good place for his New Cornelia miners to raise their families. Visitors can pick up a walking tour map/brochure at the Visitor Center located at the old train depot.

Greenway, formerly a Rough Rider with Theodore Roosevelt, was the highly successful general manager and an owner of the Calumet & Arizona Mining Company that included the Lavender Pit Mine at Bisbee and the New Cornelia Mine at Ajo. He was the second husband of Isabella who, following John’s death in 1926, founded the Arizona Inn in Tucson and became Arizona’s first U.S. Congresswoman.

Across the street from the plaza, the most prominent features are two white churches. The Federated Church, while visually interesting, has almost no ornamentation. The Immaculate Conception Catholic Church follows the more ornate architectural style of the central plaza. Both are eminently photogenic.

A few miles further, past loads of cacti, long hills of white sediment and stretches of crushed stones in multi-colors line the highway, left by the New Cornelia Copper Mine.

An easy scenic drive, the Ajo Ten-Mile Loop skirts the backside of the open pit New Cornelia Mine. Along the way you can stop at the overlook and little museum about the mine. Also, in the St. Catherine’s Indian Mission, the Ajo Historical Society has a small museum out here. To no surprise, it too is mostly about Ajo’s glory days sporting one of the world’s largest copper mines.

Located 35 miles south of Ajo on Highway 85, Organ Pipe Cactus National Monument preserves a diverse and relatively undisturbed sample of the Sonoran Desert. Mountains surround the park on all sides, some near, some distant, with colors changing from one hour to the next. Ninety-five percent of the monument is designated as wilderness area, which makes this one of the best places to view the Sonoran Desert.

The vast emptiness and overpowering silence of the desert and surrounding mountains sharpens your senses, enhancing self-contemplation, and stimulating creativity.