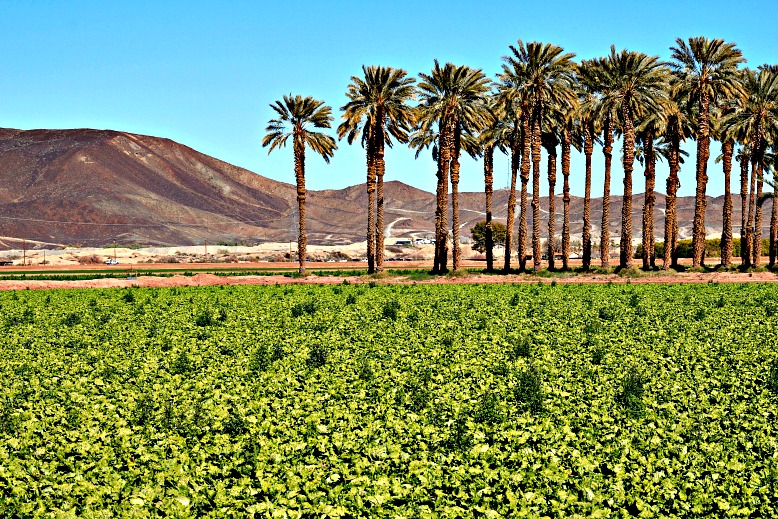 Because most people think of Arizona as a big, dusty desert, many are surprised to learn that agriculture is Yuma County’s number one industry—and that Yuma grows more than 90 percent of the country’s leafy vegetables from November through March.

In fact, the agriculture industry in Yuma County represents an annual gross economic return of $3.2 billion, or more than one-third of Arizona’s annual total of $9.2 billion.

With mild winters, little danger of hard frost and more than 350 days of sunshine a year, Yuma County enjoys the longest growing season in the country. And while the winter is notable for the emerald and ruby patchwork formed by vast vegetable fields, something is either growing or happening in Yuma County fields even during the hottest months of the year.

One reason is the fields—sediments deposited by the Colorado River over millions of years—have some of the most fertile soil in the country.

But with less than three inches of rainfall annually, water was the missing component, though the mighty Colorado flowed nearby. The Bureau of Reclamation’s first big water project in the West gave nature a hand, with construction of the first dam on the Colorado and completion of the Yuma Siphon—delivering water through a huge tunnel built under the riverbed—in 1912, the same year Arizona became a state.

Now, of the 230,000 acres of land utilized for agriculture in Yuma County, 100 per cent are irrigated with Colorado River water delivered by one of the county’s seven irrigation districts. Every field in the county is also laser-leveled and graded using GPS technology, making Yuma’s irrigation network one of the most efficient in the world.

All this has made Yuma County first in the state—and THIRD IN THE NATION—for vegetable production.

To put this in perspective, the Yuma area is home to nine salad plants that produce bagged lettuce and salad mixes. During peak production months, each of those plants processes more than two million pounds of lettuce per day.

There are also 23 cooling plants in the Yuma area, where powerful refrigeration units bring truck-sized loads of vegetables from field to shipping temperatures in less than half an hour. Crops harvested here in the morning can be in Phoenix by afternoon and on the East Coast in three to four days.

But lettuce is just part of the story: More than 175 different crops are grown in the Yuma area, including many grown to seed here because of the perfect growing conditions. For example, Yuma County ranks number one in Arizona for lemon, tangelo, and tangerine production, and for watermelons and cantaloupes; a local cattle company usually has more than 120,000 head of beef cows on its lot.

There also are more than 40,000 acres of wheat grown in this region. Desert durum comprises about 95 percent of Arizona’s wheat crop, with two-thirds of that exported— mainly to Italy for use in making premium pasta.

Yuma growers also grow kosher wheat used by Orthodox Jews to bake matzo (or matzoh), the unleavened bread wafers that are eaten at Passover. Because the rules for kosher production include that the wheat not receive moisture immediately prior to harvest, Yuma’s desert conditions and controlled irrigation make it a perfect spot to grow this specialty crop.

Dates are another local crop with Biblical roots. Date production in the Yuma area now totals about 10 million pounds a year, a $30 to $35 million dollar industry that employs more than 2,000 people annually.

The date is one of the oldest tree crops with records showing that in Mesopotamia it was cultivated more than 5,000 years ago. This valuable food helped sustain desert peoples and nomadic wanderers of the Middle East and North Africa.

Dates are high in fiber, potassium, and anti-oxidants and contain no fat. They are an organic product, as no pesticides or chemicals are used on the trees or the dates. Many date confections are made locally including my favorite: Dates shakes, or milkshakes made with ice cream and dates. The indescribable joy of a good date shake!