Picacho Peak State Park is one of the best places to see the spring yellow, red, orange, blue, and purple desert blooms 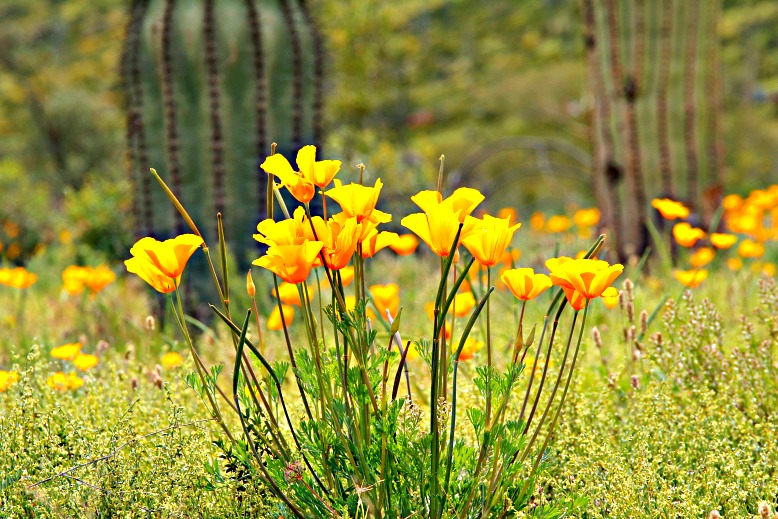 Except for the saguaros, Picacho Peak looks like it could have been plucked from the hills of Ireland. The thrust of mountain rising from the desert floor is luxuriantly green. Sitting 30 miles south of our home base in Casa Grande, just off Interstate 10, the state park has been drenched with some unusually large storms stretching all the way back to last summer’s monsoon.

The mountain looks like it is grass all the way up the sides. There’s a lush ground cover unlike anything we’ve seen in the 20 years since we first hiked this park.

Picacho Peak is known for fields of poppies in spring, blanketing the mountain slopes. This is a banner year for Picacho Peak, a superbloom!

Eye level with the poppy.

Even a little lightheaded!

Then again, maybe I’m just not as good at contorting myself into a poppy-level crouch as I was in my younger days.

Either way, the poppies have returned—fulfilling their ancient, flashy promise.

They pretty much skipped 2018—the year with no winter.

But spring seekers and flower junkies have been waiting this spring with trembling anticipation—having noted the steady succession of wet Pacific storms in December and January and on through February.

As a result the flowers have emerged on the slopes of Picacho Peak.

I love all the flowers—the lupine and globemellow and the yellow brittle brush. But the poppies have my heart.

Those dreamlike petals are only three cells thick. The cells on the top and bottom are loaded with pigments. The botanists—who printed their results in the Journal of Comparative Physiology A—said they could find no other reports of a greater concentration of pigment in the natural world.

And those cells are folded and fitted together like jigsaw puzzle pieces. This creates a whole network of little air spaces built into the flower.

As a result of this remarkable structure, the light comes in through that top layer of folded cells and then bounces around inside the cells—passing back and forth through the pigment. The rays of light refract, a sunset in a layer of cells.

All of this brilliant manipulation of color has everything to do with the insect pollinators the poppies are working to attract. Bear in mind, in a good wildflower year those pollinators have a whole hillside of clamoring flowers to choose from.

Poppies have evolved to produce different colors, depending on their pollinators. This enables them to attract a wide variety of pollinators.

Other researchers have come up with some intriguing theories on the extreme adaptability of poppies, which have adapted to different conditions all over the world. The University of York scientists were mostly focused on trying to figure out the evolution of poppy chemistry, which produces things like opium and painkillers.

The poppies have been up to this for the past 100 million years or so and likely accounts for the ability of the Golden California and Mexican poppies to cope with the extremes of the Sonoran Desert climate in Arizona and southern California.

All I know is I can’t get enough of poppies. Call it addiction.

But excuse me for now—the poppies have fully opened to the light of another day. The flowers only open on bright, sunny days. They close up every afternoon before the sun descends and on cloudy or windy days. A week of 85-degree days would wipe out the poppies.

So I must enjoy the glorious poppies.

And hope—at my age—that I can still stand up when I’m done.

Through the dancing poppies stole A breeze, most softly lulling to my soul.