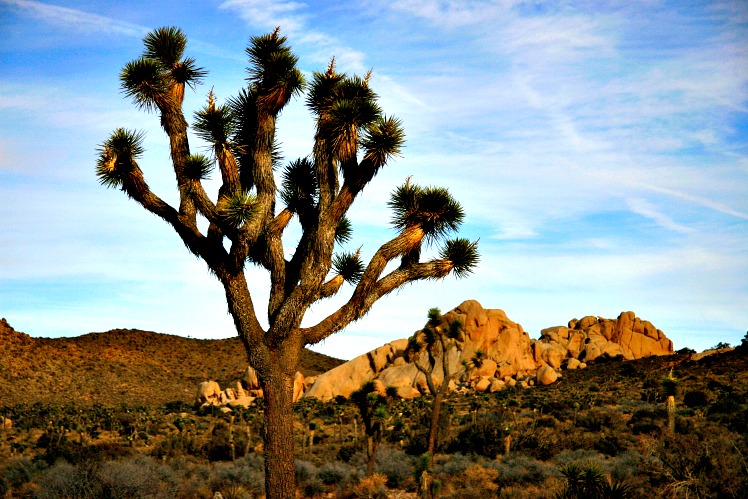 And they’re all easy to see in a day’s drive.

Arch Rock, 30 minutes from the park’s north entrance at Twentynine Palms, offers a fine opportunity to pose for a photo with one of those geologic marvels.

An even bigger wow can be had at Keys View on the crest of the Little San Bernardino Mountains. To the west, distant San Gorgonio Mountain and San Jacinto Peak— both topping 10,000 feet—scrape the sky. Looking south, you can spy the Salton Sea and, on a clear day, Mexico.

Two deserts, two large ecosystems primarily determined by elevation, come together in the park. Few areas more vividly illustrate the contrast between “high” and “low” desert. Below 3,000 feet, the Colorado Desert (part of the Sonoran Desert), occupying the eastern half of the park, is dominated by the abundant creosote bush. Adding interest to this arid land are small stands of spidery ocotillo and cholla cactus.

The higher, slightly cooler, and wetter Mojave Desert is the special habitat of the undisciplined Joshua tree, extensive stands of which occur throughout the western half of the park.

Surrounded by twisted, spiky trees straight out of a Dr. Seuss book, you might begin to question your map. Where are we anyway? In wonder, the traveler pulls over for a snapshot of this prickly oddity.

Known as the park namesake, the Joshua tree, Yucca brevifolia, is a member of the Agave family. (Until recently, it was considered a giant member of the Lily family, but DNA studies led to the division of that formerly huge family into 40 distinct plant families.) Like the California fan palm, Washingtonia filifera, the Joshua tree is a monocot, in the subgroup of flowering plants that also includes grasses and orchids.

Don’t confuse the Joshua tree with the Mojave yucca, Yucca schidigera. This close relative can be distinguished by its longer, wider leaves and fibrous threads curling along leaf margins. Both types of yuccas can be seen growing together in the park. The Joshua tree provides a good indicator that you are in the Mojave Desert, but you may also find it growing next to a saguaro cactus in the Sonoran Desert in western Arizona or mixed with pines in the San Bernardino Mountains.

Years ago the Joshua tree was recognized by American Indians for its useful properties: tough leaves were worked into baskets and sandals, and flower buds and raw or roasted seeds made a healthy addition to the diet.

By the mid-19th century, Mormon immigrants had made their way across the Colorado River. Legend has it that these pioneers named the tree after the biblical figure, Joshua, seeing the limbs of the tree as outstretched in supplication, guiding the travelers westward.

Concurrent with Mormon settlers, ranchers, and miners arrived in the high desert with high hopes of raising cattle and digging for gold. These homesteaders used the Joshua tree’s limbs and trunks for fencing and corrals. Miners found a source of fuel for the steam engines used in processing ore.

Others were not as visionary. Early explorer John Fremont described them as “…the most repulsive tree in the vegetable Kingdom.”

The trees bloom in spring between February and April, and they are pollinated by the yucca moth, which spreads pollen from tree to tree while laying her eggs in the flowers.

Judging the age of a Joshua tree is challenging: these “trees” do not have growth rings like you would find in an oak or pine. You can make a rough estimate based on height, as Joshua trees grow at rates of one-half inch to three inches per year. Some researchers think an average lifespan for a Joshua tree is about 150 years, but some of our largest trees may be much older than that.