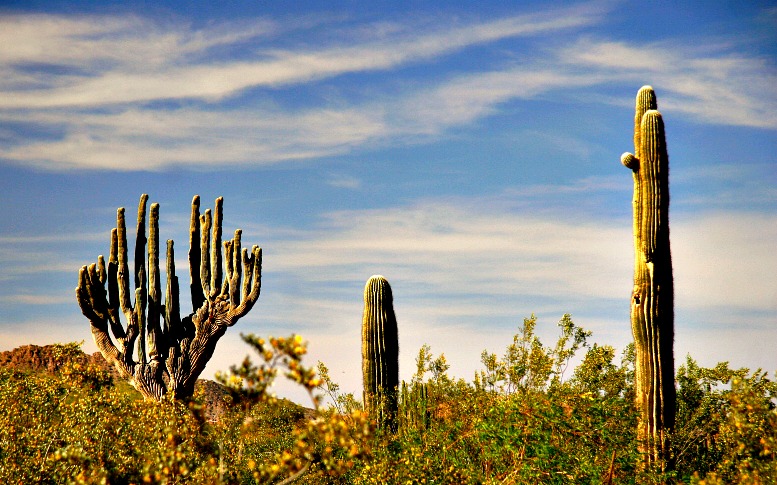 Papago Park is located on the east-side of Phoenix, near the border of Tempe and South Scottsdale. The 1,200 acre park is home to “Hole in the Rock” a red rock that is distinctive to its landscape. Its massive, otherworldly sandstone buttes set Papago Park apart, even in a city and state filled with numerous world-class natural attractions.

It is not the largest park in the city of Phoenix, a distinction that belongs to South Mountain Park. But Papago features the widest variety of outdoor fun and is home to some of the most visited attractions in the Phoenix area making it a popular destination for both residents and vacationers.

Papago’s desert trails are generally smooth, easy treks with little elevation gain, making it a great place for a family hike or to hone your mountain biking skills. While visitors to Papago can enjoy its extensive trail network through Sonoran Desert habitat, they can also enjoy the park’s two major residents, the Phoenix Zoo and Desert Botanical Garden, world-class attractions that draw millions of visits each year.

It is also home to the Arizona Historical Society Museum and Hunt’s Tomb, the tomb of George W.P. Hunt (1859-1934), Arizona’s first governor. The Papago Golf Course is also located within the park. Oh, and did we mention it’s only 10 minutes from downtown Phoenix.

But did you also know that its 1,200 acres were once known as Papago-Saguaro National Monument? Part of the homeland for the Hohokam, local tribes—the Maricopa and Akimel O’odham—and rich in petroglyphs, archaeological sites, desert plant life, and scenic qualities, this area stood out among many other spots in Phoenix for a national monument status.

In 1914, about 1,700 acres surrounding Hole-in-the-Rock butte was designated Papago-Saguaro National Monument by President Woodrow Wilson. The intention of this was to federally protect the archaeological sites, per the Antiquities Act of 1906, as well as create a scenic area for locals and tourism.

Despite the lofty designation, however, Papago-Saguaro suffered from severe funding issues, something that many national park sites are still struggling with today.  Eventually, in 1930, Congress abolished Papago-Saguaro National Monument and transferred ownership to the state and local city governments.

During World War II, the area housed German prisoners of war from 1943 to 1946. After the war, the prisoner camp was converted to a Veterans Administration Hospital from 1947 to 1951. It became the District Headquarters for Arizona’s largest Army Reserve Unit from 1953 to 1966. In fact, today an “off-limits” portion of Papago Park is used for Arizona National Guard training.

The hole-in-the-rock is the most prominent icon in Papago Park and carries evidence that the prehistoric Hohokam Indians settled this area thousands of years ago. The red butte was created 6 to 15 million years ago and naturally formed with a series of openings caused by erosion.

The openings and chamber (hole) near the butte’s summit are easily accessed from the rear via a smooth, but somewhat steep path. Those that trek to the chamber hole-in-the-rock are rewarded with great views across the city.

The ancient Hohokam People noticed that a hole in the ceiling in the chamber creates a ray of light that changes positions on the chamber’s floor during the year depending upon seasonal movements of the sun. They marked the occurrence of the summer solstice by grinding a bedrock “metate slick” at the location where the ray of light falls during the day at noontime.

The winter solstice is marked by the ray of light interaction with a natural seam in the bedrock. They also marked the equinoxes, the seasonal halfway point between the summer and winter solstices with a bedrock metate slick. The boulders near the hole-in-the-rock appear to provide other solstice and equinox markers.

While Papagp Park may not be part of the original vision when the area become a national monument, it is an area where a portion of Phoenix’s original natural beauty still manages to flourish.

Alone in the open desert,

I have made up songs of wild, poignant rejoicing and transcendent melancholy.

The world has seemed more beautiful to me than ever before.

I have loved the red rocks, the twisted trees, the sand blowing in the wind, the slow, sunny clouds crossing the sky, the shafts of moonlight on my bed at night.

I have seemed to be at one with the world.