It stands like a sentinel, watching in the wind over one of America’s most treasured landmarks, the Hoover Dam 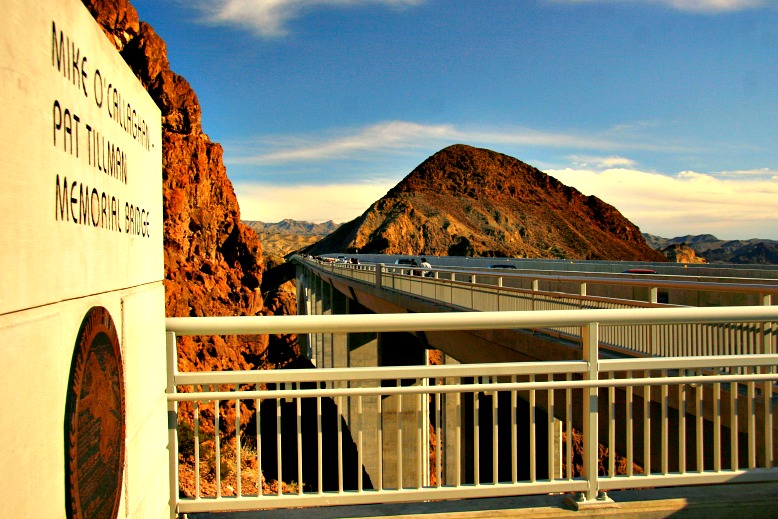 When the Mike O’Callaghan-Pat Tillman Memorial Bridge—and the rest of the 3.5 mile-long Hoover Dam Bypass—opened to traffic on October 19, 2010, it was an instant tourist attraction while providing a quicker, safer drive between Phoenix and Las Vegas.

The bridge is the second-highest bridge of any kind in the United States and 14th in the world. It is the highest and longest arched concrete bridge in the Western Hemisphere and has the world’s tallest concrete columns of their kind.

It is a composite steel and concrete arch four lane bridge of 1,500 feet, located downstream from the dam and is perched 890 feet above the Colorado River, wedged between rock cliffs that form Black Canyon.

The bridge is a twin-ribbed arch, two parallel arches joined by 10 horizontal struts to strengthen the bridge against a quake’s side-to-side motion.

Seven pairs of concrete columns rise from the slopes of the canyon’s rock walls, and a series of eight more pairs are along the top the semicircular arch. The columns are made of stacked prefabricated concrete blocks and the arch was poured in place in midair.

1,200 skilled workers and 300 engineers worked on the project.

The tight switchbacks that descend into the Colorado River canyon and across the Hoover Dam had long been a major bottleneck on busy Highway 93 which links Las Vegas, Nevada with Kingman, Arizona and Interstate 10. Since the dam’s completion in 1935, large trucks had to negotiate several tight switchbacks along the two-lane road before dodging hordes of tourists visiting the Hoover Dam and visitor center.

After 2001, trucks were diverted south to Laughlin on Highway 95 but the congestion had reached a point where it became obvious a high level bypass would be the only real solution.

The bridge is named for Mike O’Callaghan, a former Nevada governor and executive editor of the Las Vegas Sun, and Pat Tillman, an Arizona Cardinals football player who joined the Army and was killed in Afghanistan. Both died in the spring of 2004; O’Callaghan at age 74 and Tillman at the age of 27.

To get to the bridge from Las Vegas, drive east bound on US 93, through Boulder City and pass Lake Mead. Just past the Hacienda Casino, there is an exit for the Hoover Dam. If you stay on the 93, you’ll cross the bridge. However, due to four-foot high concrete walls on either side, you won’t see anything as you cross. There are no parking areas along the 93 to pull over and have a look.

After you take the exit off 93, and before you get to the Dam, you’ll come across the parking lot for pedestrian access to the bridge. If you’re heading into Arizona after some sightseeing at the Dam or on the pedestrian walkway, be warned that you can’t rejoin the 93 on the Arizona side. The Hoover Dam road exit dead ends about one mile past the Dam on the Arizona side.

After taking the Hoover Dam exit, you’ll make a clearly marked left turn to get to the Dam. If you turn right, it will lead you to a parking area for Gold Strike Canyon, which features a very scenic, and somewhat difficult, hike to Gold Strike Hot Springs. To get to the Dam, and to the bridge’s pedestrian walkway, just follow the signs; it would be almost impossible to get lost.

The bridge is 1,900 feet long and its twin concrete arches—at 1,060 feet—are the longest in the western hemisphere. At 890 feet above the river below, it is the second tallest in the United States, second only to the Royal Gorge Bridge in Colorado.

Construction of the bridge required the excavation of more than 3.6 million cubic yards of rock and embankment.

The bridge contains about 16 million pounds of steel including more than two million feet of cable stay strand.

Over the eight years of construction, workers endured 374 days of triple-digit temperatures (the highest being 117 degrees) with gusts of wind topping 35 mph about 80 times each year.

Mystery creates wonder and wonder is the basis of man’s desire to understand.