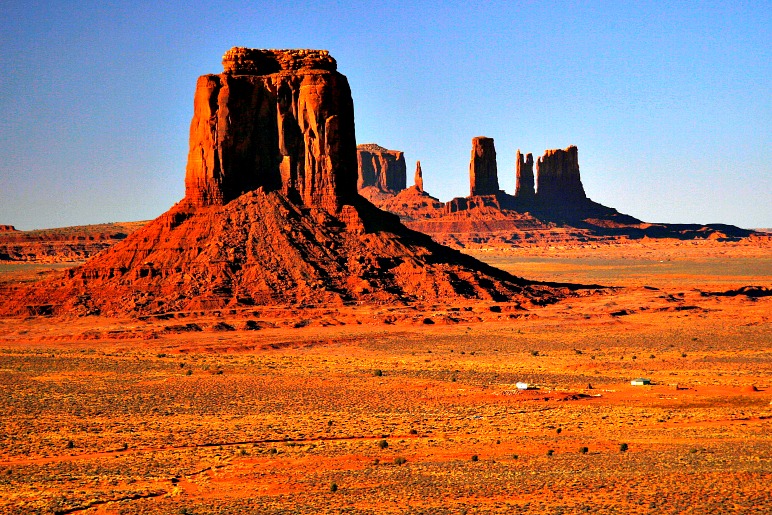 Highways roll endlessly along plains with not a soul in sight. The land rises imperceptibly cliffs reveal themselves in the distance.

Further exploration uncovers a canyon where ancient people once made their homes—and where some live still. The road leads on to a magical place where rocky monoliths burst from the desert floor.

Must-see paid attraction: Monument Valley, “discovered” by Hollywood in the 1940s, can be seen in 3D, 360-degree glory for less than the price of a movie ticket. Admission to the tribal park is $20 a carload, and worth a trip at 10 times the price.

Must-see free attraction: Drive along the north and south rim of Canyon de Chelly National Monument to see some of the state’s most unusual formations. Spider Rock is among the most popular stops, the narrow spire seeming to defy gravity.

Best place to take a selfie: Walk up the boulders bordering the visitor center parking lot at Monument Valley. Once you’ve framed the Mittens—the park’s two most famous formations—snap away.

Best unguided hike: The Wildcat is the only trail in Monument Valley that visitors can experience without a Navajo guide. It brushes so close to the Mittens formations that you can almost feel them holding you. Starting from the campground, the easy, 3-mile trail drops to the valley floor, where blocky towers vault from sand and sagebrush.

Burn some calories: Hike down the White House Trail in Canyon de Chelly. You’ll descend about 600 feet from the overlook, constantly enticed by the view of the White House Ruins, an ancient village built at the foot of a sheer cliff. The round trip takes about two hours. Carry plenty of water and ample time to walk back up.

Best shopping: The Hubbell Trading Post National Historic Site in Ganado dates to 1878 and is the oldest continuously operating post on the Navajo Reservation. Browse the traditional and contemporary textiles, jewelry and other works in the delightfully creaky building.

Most scenic drive: Not long after northbound U.S. 89A crosses Marble Canyon, a vast wall of stone appears to the east. The Vermilion Cliffs stretch for miles, and it’s easy to imagine they were erected by extraterrestrials to protect whatever is beyond the impenetrable barrier.

There is a much simpler geological explanation, but still …

Best bathroom break: Whether you have to go or not, stop at the Navajo Bridge rest area on U.S. 89A in Marble Canyon and stroll across one of just seven Colorado River crossings along 750 miles.

The original bridge, now a pedestrian walkway, opened in 1929. Next to it is the new span, opened in 1995 and built to handle larger, heavier vehicles.

Best place to see the sunset: When the sun dips low, the formations in Monument Valley glow with an ethereal light. But sunrise and sunset are magical times across northeastern Arizona thanks to a vast sky over an endless range. No matter where you are, pause, enjoy, and reflect.

You need to know: Towns are few and far between, and cell service is spotty at best. Bring emergency supplies, including water, flashlight, a functional spare tire. and various tools. Odds are all will go well, but it’s best to be prepared.