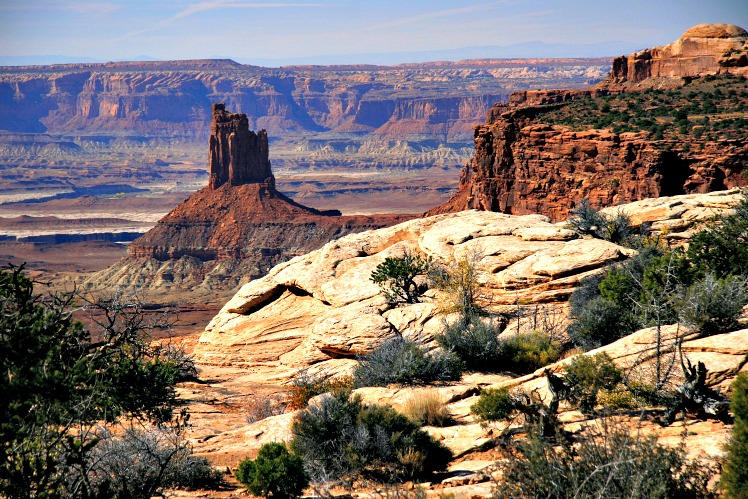 People who live in the West are indeed blessed. They really don’t have to travel very far to visit one of America’s great national parks. In California, there’s Yosemite, Joshua Tree, and Sequoia and Kings Canyon. To the west in Arizona, there’s the Grand Canyon, and north in the state of Utah, you can also find Bryce, Zion, Capitol Reef, Arches, and Canyonlands.

Most of us who tour national parks, probably have explored two or three of the five mentioned Utah parks. The one that is least visited, Canyonlands, is the one that is unusually interesting in that it most resembles the Grand Canyon in structure. That’s for obvious reasons, most importantly, the Colorado River runs through it and over eons carved out the canyons that we come to see and enjoy.

There are other similarities as well. The Grand Canyon is divided by the Colorado River into the two sections, the North Rim and the South Rim. Most people visit the South Rim, which is all about the viewpoints that look down into the canyons. Canyonlands is the same.

There are three separate regions for visitation, technically divided by the Colorado River. In the south, one can travel to The Needles and The Maze regions and to the completely separate north, the Island in the Sky region. Most people visit the easily accessible Island in the Sky, and here, too, it’s really all about peering down to the canyon vistas.

The odd thing about Island in the Sky is you take Highway 191 north out of Moab, drive past Arches National Park and you fully expect to see a big sign, that if it could speak, would loudly scream, “turn here, turn here.” Instead a little sign whispers, “this way, this way.”

I’m not sure why Canyonlands can’t attract the attention it needs, but if you blink you will miss the turn sign. Catch it and you head west through the break in the rock wall that has followed you since Moab.

The road will eventually twist and turn, climbing all the time until you find yourself at the top of an extensive mesa, a high plateau as flat as a pancake and going on and on until it ends, which it does abruptly to sheer drops of 1,000 feet or more. That’s where you are heading, the numerous, scenic spots where the mesa ends and you can look out and over the surrounding canyons.

The high plateau is mostly grasslands, but the elevation rises to anywhere from 5,500 feet to over 6,000 feet at the Grand View Point Overlook. As the elevation ascends, the grasslands devolve and once you arrive at the park, the landscape is red desert spotted with juniper trees and other gnarly plants like pinon pine.

The park begins at the Visitor Center, which is quite sparse and not at all elaborate like nearby Arches.

There are some really strenuous hikes in the parks, but remember you are literally at the top of an existent world and many of those hikes descend precariously. The Murphy Loop trail drops 1,400 feet, while the Syncline Loop features boulder fields, switchbacks, and a 1,300 foot elevation change. Even for the experienced hiker these are hard, full-day journeys.

The typical day visitor to Canyonlands will make two relatively short hikes. The easiest is the Mesa Arch trail, a loop that starts at the road and at mid-point puts you at the edge of a canyon. The reward on this hike is a horizontal arch that at first glance doesn’t look like much, but once you get close enough to actually be under the arch you realize that’s as far as you are going to proceed, because you are at the edge of the ledge. Then continue on for the rest of the loop. All in, it’s about a 30 minute walk.

The highlight for Island in the Sky is the Upheaval Dome, which conversely is actually a 1,500-foot-deep crater. According to one theory, the “dome” was formed by a meteor crashing into earth. However, it’s not just the geology that makes this stop interesting, it’s also the best short hike in Island in the Sky.

The classic Canyonlands overlook is Grand View Point, where you can see the meeting of the Green and Colorado rivers, but it’s anticlimactic after the exhilarating walk to Upheaval Dome.

Everybody needs beauty as well as bread, places to play in and pray in where nature may heal and cheer and give strength to the body and soul.