Its nine miles up Highway 4 from Angels Camp to the neighboring mining town of Murphys, founded in 1848 by John and Daniel Murphy 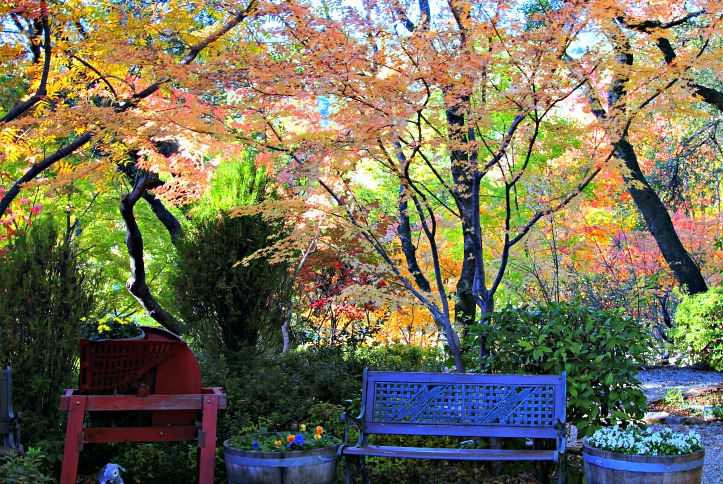 Murphys’ rich and colorful past came alive in 1848 when John and Daniel Murphy established a trading post and gold mining operation in the area that is now their namesake. They were part of the first immigrant party (Stephens-Townsend-Murphy) to successfully bring wagons over the Sierra in 1844, paving the way for westward migration.

It is reported that the brothers took two million dollars in gold ore from the Murphys Diggins in one year’s time, making them millionaires before the age of 25.

Murphys was one of California’s richest diggins. During one winter, five million dollars worth of gold was taken from a four-acre placer area, and the town grew prosperous despite the usual cycle of devastating fires and rebuilding.

Once a hodgepodge of miners’ tents and lean-tos, Murphys has aged well.

The picturesque village is known today for its many natural attractions including caverns for public viewing, a charming Main Street with friendly merchants and unique shops, spectacular wineries, and art galleries.

A stroll down tree-lined Main Street transports visitors back to the mid-1800s with buildings bearing thick stoned walls, iron shutters, and pastoral gardens. Its leafy streets are lined with white picket fences, oaks and sycamores, eateries, and tasting rooms.

The Sperry & Perry Hotel—now known as Murphys Historic Hotel & Lodge—opened to guests in 1855. Ulysses S. Grant slept here; so did Mark Twain, Horatio Alger, and Charles Bolton, aka Black Bart, the poetry-writing bandit who successfully robbed 28 Wells Fargo stagecoaches before his arrest in 1883. Locals line up along the saloon’s bar. In the morning, follow the divine smells across the street to Biga Murphys Bakery.

Unique from any other wine region, you can literally do wine country on foot in Murphys. There are over 25 wineries here and 20 of them have tasting rooms within walking distance from one another along Murphy’s historic downtown. Picturesque vineyards and destination wineries are nestled in the nearby rolling hills.

Ironstone Vineyards, on the outskirts of Murphys, attracts visitors year-round with wine tastings and events such as the daffodil festival in the spring. Explore the seven-level winery, its extensive wine caves, museum, and outdoor mining exhibit, before you grab lunch at the deli and picnic on the grounds.

Then, belly up to the elegant 1907 bar to sample Ironstone’s Obsession Red Blend, Cabernet Franc, and Zinfandel. You can see a fully restored 769-pipe theater organ, originally made in 1927 for Sacramento’s now-defunct Alhambra Theater.

For a more intimate tasting, drive a few miles north of Murphys on Sheep Ranch Road to bucolic Stevenot Winery. In the tasting room, buy a bottle of Tempranillo, a medium-bodied red wine, and assorted chocolates in the gourmet section.

Also on Sheep Ranch Road is Mercer Caverns. It has all the awesome cave accessories: stalactites, stalagmites, draperies, and columns. It’s 161 feet, down several flights of stairs, to the bottom. When you emerge from this dark hole in the ground, consider a visit to something soaring high above ground—the giant sequoias.

You’ll find them 14 miles up Highway 4 from Murphys in Calaveras Big Trees State Park. It’s both humbling and thrilling to prowl among the planet’s largest living things. Tourists from around the world follow the well-trampled trails through the North Grove.

My travels led me to where I am today. Sometimes these steps have felt painful, difficult, but led me to greater happiness and opportunities.
—Diana Ross