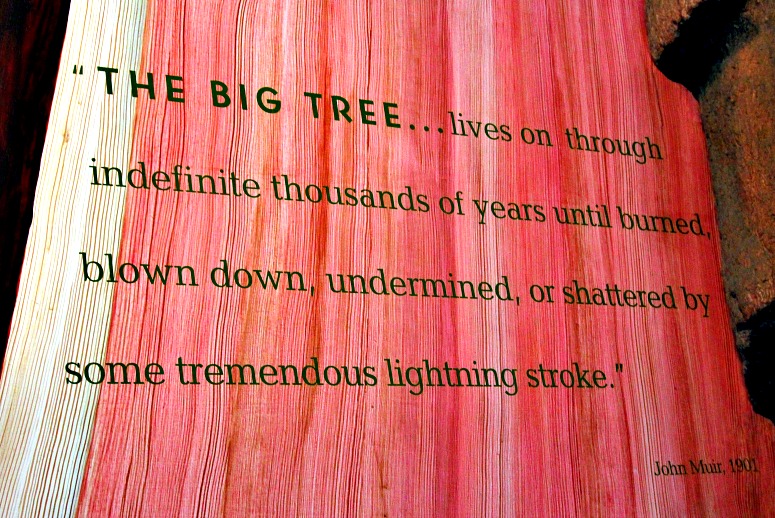 Big trees are the prime attraction of Sequoia National Park—many groves of the remarkable giant sequoia are found scattered along the moist, west-facing slopes of the Sierra Nevada between elevations of 5,000 and 7,000 feet.

The scale and grandeur of these reddish giants is stunning, and the park has many easy trails that wind through the woody groves leading to quiet undisturbed places, ideal to contemplate the ambience of the forest.

Using Sun & Fun RV Park in Tulare as our home base, we approached Sequoia National Park from the southwest. Long and straight, California Highway 198 crosses the flat San Joaquin Valley, through endless acres of citrus and vegetables. Hazy foothills slowly appear. At first these hills are low and covered only by parched grass, typical of the southern and western extremities of the Sierras.

Gradually gaining elevation, the road passes around the edge of Lake Kaweah and runs through Three Rivers, the last town before the mountains. It is named after the Kaweah River, which nearby splits into South, East, North (and Middle and Marble) branches, each of which flows through a steep canyon.

The main road to Sequoia follows the Middle Fork and begins to climb several miles east of town. For 5 miles the route is along the side of the canyon, gaining in height above the river and crossing the national park boundary. The landscape is still mostly arid, with yucca and other desert plants.

One mile inside the park entrance, the Foothills Visitor Center offers information, exhibits to explore, and a small bookstore.

Passing the Hospital Rock picnic site, the road turns away from the canyon and heads north into the mountains. The 8 miles between the picnic area and the first group of sequoias at Giant Forest is amazingly steep and twisting, passing through countless hairpin bends and steep grades during a total climb of 3,700 feet. Vehicles over 22 feet are not advised to drive this route; even our toad is often reduced to speeds of only 15 mph.

On the ascent there are several great viewpoints over the continuation of Middle Fork Canyon far below. The scenery changes from bushes to oak trees, to forests of fir, pine, and cedar, and finally sequoias; at first scattered and relatively small, although still of distinctive color and much larger than the neighboring trees, but quite suddenly the giants are all around, towering above everything else.

This is the Giant Forest, centerpiece of Sequoia National Park. The largest trees on earth are found here, including General Sherman, which is the world-record holder for the most massive living thing. Dozens of magnificent groves of sequoias can be seen in just 3 square miles.

In 1937, due to natural causes, a 275-foot tall and 21-foot in diameter tree fell across a road. A year later, an 8-foot tall, 7-foot wide tunnel was cut through the trunk to make the road passable again.

Moro Rock is a granite dome that affords one of the best views of the Sierra Nevada mountains. In the 1930s, a 400-step stairway was cut into and poured onto the rock so visitors could climb to the top.

Hiking trails wind through the sequoia grove and meadows. Moro Rock-Crescent Meadow Road leads to Moro Rock, Tunnel Log, and the High Sierra Trail. The Big Trees Trail offers an easy hike around a meadow that’s ideal for families and people in wheelchairs.

After spending five days with five men cutting down a single sequoia, Walter Fry counted the growth rings on the fallen giant. The answer shocked him into changing careers. In just a few days they had ended 3266 years of growth. Fry later became a park ranger and, in 1912, the parks’ superintendent.

Between Kings River and the Kaweah, we enter the colossal forests of the main continuous portion of the sequoia belt.