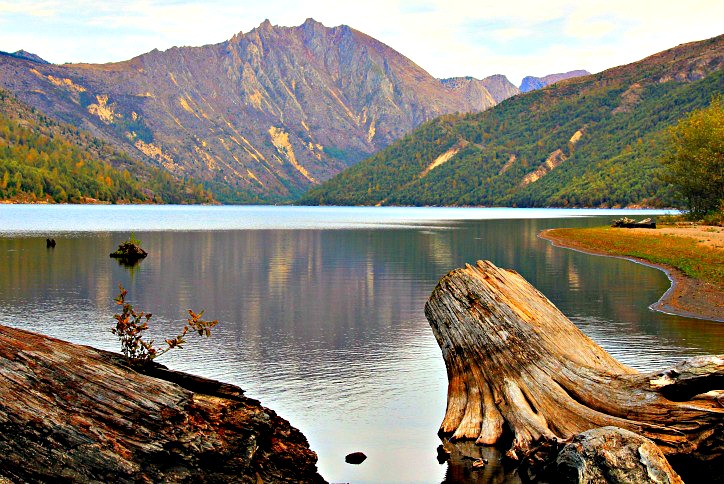 The Spirit Lake Memorial Highway is the only scenic byway in the U.S. that penetrates a fresh volcanic blast zone. This scenic and historic route is a 52-mile journey into the scene of epic destruction that Mount St. Helens caused when it erupted on May 18, 1980.

Along the way, experience the enormous geologic, economic, and personal impact the eruption had on this area, and witness the region’s recovery.

Rebuilt and reopened in 1992, the byway continues to carry its original name but no longer leads to Spirit Lake. Rather, it ends at Johnston Ridge and affords a striking view of the post-eruption lake and the volcano’s crater.

Along the byway are four distinct interpretive and tour centers: Silver Lake, Hoffstadt Bluffs, the Weyerhaeuser Forest Learning Center, and Johnston Ridge. Each one tells a different part of the story from the natural history prior to the May 1980 eruption, the aftermath, reforestation efforts, and natural recovery of plants and animals. Above all, the devastated landscape is an extraordinary lesson about our planet’s ferocious power and miraculous powers of regeneration.

Five miles east of I-5 is the Mount St. Helens Visitor Center at Silver Lake. The center describes each chapter of the mountain’s history from pre-eruption years to today. It also features exhibits about the region’s history and culture as well as offering geological background on the volcano and the surrounding area’s slow but steady recovery.

Look down the valley where the bleached remains of a blown-down forest are in view. See the evidence of an unimaginable force that flattened 150 miles of old-growth timber as if the trees were toothpicks.

A nature trail at the Mount St. Helens Visitor Center leads to beautiful Silver Lake and its wetlands.

Five miles past the visitor center is the Toutle River, which the byway parallels for the remainder of the route. The river became a nightmarish mudflow during the eruption as massive amounts of sediment poured into the water.

You can find some of that mud today on the walls of the North Fork of the Toutle River, and you can get a closer look from a viewpoint on Stewart Dam Road (turn right just before the Toutle River Bridge).

A small, spirited community that survived the blast, Kid Valley was once a town of logging camps and mining claims. When Mount St. Helens blew up, many families in Kid Valley’s outlying areas lost their homes. Mudflows buried logging camps and the Green River Fish Hatchery.

Today, Kid Valley has reestablished its character and charm. A local family turned one of the original homesteads into the Kid Valley Campground, a convenient base for sightseeing, hiking and biking the Mount St. Helens area.

About 27 miles along the byway, Mount St. Helens becomes spectacularly visible. The Hoffstadt Bluffs Visitor Center, the second of four visitor centers, offers an opportunity to take a good look at the volcano and surrounding valley. Large elk herds can often be seen in the mudflats below the parking lot.

A memorial trail through a nearby grove pays tribute to 57 people who lost their lives in the eruption.

Continue east over the half-mile-long bridge over Hoffstadt Creek, and enter the blast zone. The Weyerhaeuser Forest Learning Center, at milepost 33, describes the work of foresters before, during, and after the eruption, with an emphasis on reforestation and conservation projects. One of the interesting goals of the learning center is to not interfere with the destruction caused by the eruption and let nature take its course as much as possible.

At the end of the Spirit Lake Scenic Byway is Johnston Ridge Observatory, where visitors are only five miles from the crater and lava dome of Mount St. Helens. Stands of dead trees, stripped of their bark, and the remains of Spirit Lake, its surface still covered by a mat of logs, leave a lasting impression. The entire lake was tossed 800 feet up the opposing mountainside during the blast and now rests where it returned, half as deep and with twice the surface.

Experience the power of this place by taking a short hike. The Coldwater Lake Trail is an easily navigated boardwalk leading to a lake that was formed after the eruption. The Hummocks Trail—hummocks are mounds of volcanic debris—takes an hour to walk and is moderately strenuous, winding through lupine fields and beaver ponds on what was once the site of the largest landslide in recorded human history.

Each volcano is an independent machine—nay, each vent and monticule is for the time being engaged in its own peculiar business, cooking as it were its special dish, which in due time is to be separately served.