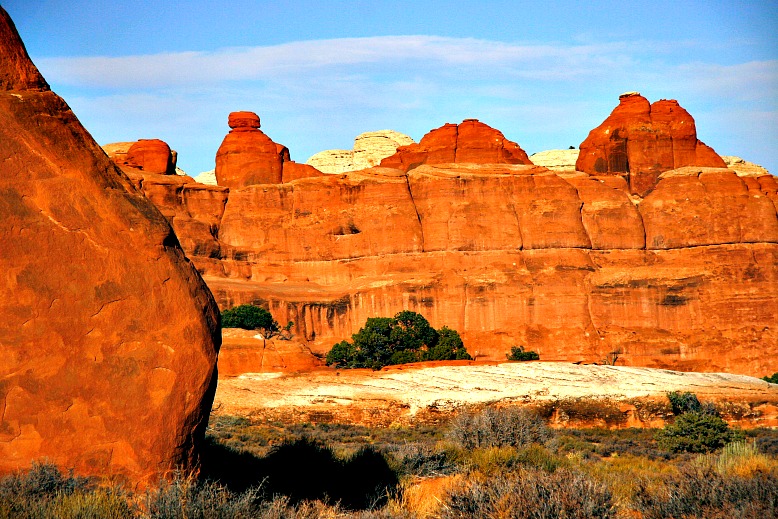 Moab is unique in that it has two national parks just outside city limits: Arches and Canyonlands, about 10 miles apart, and each represent different visions of what a national park can be.

Natural arches abound at the park and come in all sizes, ranging from an opening of only 3 feet to the 306-foot span of Landscape Arch, one of the largest in North America.

Arches National Park is a red, arid desert, peppered with oddly eroded sandstone forms such as fins, pinnacles, spires, balanced rocks, and arches. The 73,000-acre region has over 2,000 of these “miracles of nature.”

Once inside the park, the 18-mile Scenic Drive climbs a steep cliff and winds along the arid terrain along the first amazing glimpses of red rock features. The road initially passes the Park Avenue area and then Courthouse Towers. The road then comes to the rolling landscape of Petrified Dunes before arriving at Balanced Rock.

Continuing on the park road, a turnoff leads to the Windows section, home to the first concentration of arches and some of the parks largest. Short trails lead from the road to Cove Arch and to Double Arch. This side road ends at the site of the North and South Windows and Turret Arch.

Returning to the main park road, the Scenic Drive continues for 2.5 miles to another turnoff which leads to Wolfe Ranch and the Delicate Arch viewpoints.

Once again on the main road, the Scenic Drive provides overlooks for Salt Valley and Fiery Furnace, home to a fascinating labyrinth of ridges and narrow canyons.

The Scenic Drive ends at Devil’s Garden area, site of the park’s campground (reservations strongly advised) and the trailhead for the popular Devils Garden Trail.

Devils Garden Trail showcases many of the park’s best arches and can be hiked from 1.6 miles to 7.2 miles, depending on your time, fitness level, and number of arches you wish to see. The shortest leg takes visitors to the Famous Landscape Arch, an amazing ribbon of rock that spans more than a football field from base to base.

Canyonlands National Park covers a vast area of wilderness, centered round the confluence of the Green and Colorado rivers. The park preserves an immense wilder­ness of rock, in which water and gravity have carved hundreds of canyons, mesas, buttes, spires, arches, and other spectacular rock formations.

The Green and Colorado rivers have carved two large canyons that serve as the centerpieces for the colorful but smaller canyons that sur­round the area.

Over millions of years, the rivers and their small tributaries have carved the flat sandstone rock layers into many amazing forms with an immense variety of colors.

Although there are some paved roads, much of Canyonlands is still largely inaccessible. The best way to see most of the park is by 4WD vehicle, but many roads are rough, and huge areas lack any access.

One makes the vast and rugged desert accessible to all; the other makes exploration more work, but worth it.

Arches attracts large crowds because of a paved road that brings you a short distance from all the major attractions. Delicate Arch, the red-rock wonder that adorns Utah license plates, requires the most work to see: a 3-mile hike round trip.

In contrast, most of the 520 square miles of Canyonlands cannot be accessed by road. The park is divided into four sections: Island in the Sky, the most accessible and popular area; the Needles, a more remote area with spectacular rock formations; the Rivers, where people raft the Colorado and Green rivers; and the Maze, the least accessible area in the park.

May your trails be crooked, winding, lonesome, dangerous, leading to the most amazing view. May your mountains rise into and above the clouds.