Majestic figures of George Washington, Thomas Jefferson, Theodore Roosevelt, and Abraham Lincoln, surrounded by the beauty of the Black Hills of South Dakota, tell the story of the birth, growth, development, and preservation of America 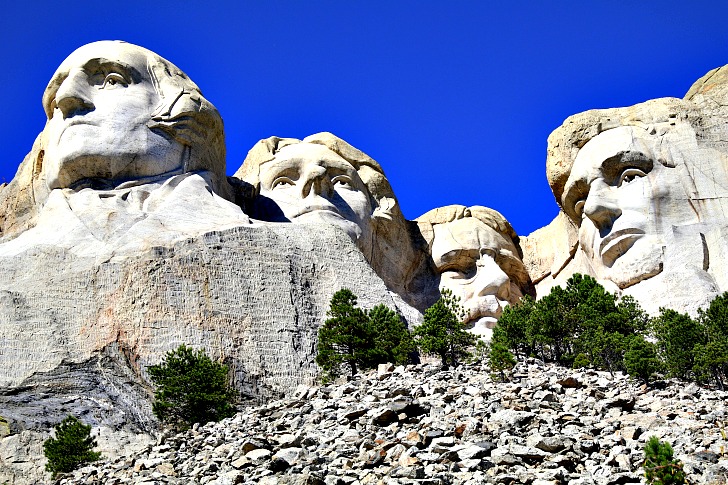 “If you build it, he will come.” That oft-quoted line from the film Field of Dreams has equal resonance as the motivating force behind the formation of America’s Shrine to Democracy—the Mount Rushmore National Memorial.

Located in the Black Hills of South Dakota, this colossal monument was the brainchild of state historian Doane Robinson, who conceived of the mountain carving in 1924 as a way to draw people from all over America to his state.

Mount Rushmore symbolizes the ideals of freedom, democracy, and the American dream in the four 60-foot granite faces. This mountain carving of Presidents George Washington, Thomas Jefferson, Theodore Roosevelt, and Abraham Lincoln draws over two million visitors a year (2,431,231 in 2016). It is both a spectacular site and a man-made wonder.

The first blast on the mountain occurred in 1927. Under the direction of sculptor Gutzon Borglum, 400 men and women worked through hot summers and cold winters to create the 60-foot faces, nearly 500 feet up the side of the mountain.

Over 90 percent of the mountain was carved using dynamite. The fine details of the faces were achieved, using jackhammers and hand chisels. Operators hung from the top of the mountain in bosun chairs held by steel cables. Despite the dangerous work, in the 14 years it took to carve the mountain, not a single person died. The memorial was officially declared complete on October 31, 1941.

Mount Rushmore National Memorial is open year-round, seven days a week and is located 23 miles from Rapid City. The memorial offers a variety of activities so plan to spend at least four to five hours there. Visitors can leave and return to the memorial the same day for the evening lighting ceremony. Mount Rushmore also features a gift shop, information center, and an award-winning audio tour.

Begin at the information center where staff and displays will help you plan your visit to the memorial and the Black Hills region. From here, go up on the walkway toward the sculpture and other facilities. The Lincoln Borgham Visitor Center has exhibits on the carving of Mount Rushmore, a 14-minute film, “Mount Rushmore—The Shrine,” an information desk, restrooms, and a bookstore. The Sculpture’s Studio displays models and tools used in the carving process.

The Presidential Trail is a half-mile loop that provides various views of the iconic Mount Rushmore National Memorial that can’t be missed. This easy trail meanders through the pines and near the blasting rubble left from workers carved the mountain decades ago. Along the trail, each president is highlighted with history provided by plaques found along the way.

Follow the crowds, and you’ll end up at the Grand View Terrace, just beyond the Avenue of the Flags. True, the head-on views are spectacular and unobstructed. But you can do better. Walk the often-bypassed loop around the base of the mountain. Climbing up the steps though ponderosa pines, you can get a closer view of the faces at various twists and turns (and maybe catch a glimpse of a Rocky Mountain goat or a mule deer, too).

Heading southeast from the memorial, follow Highway 16A, a twisting route down Iron Mountain Road. You’ll find tunnels that were specifically carved to frame the faces, yet predate the monument itself. They knew the mountain was going to be carved, so they constructed the tunnels to show off the faces before they were ever there.

Keystone is the closest city in the Black Hills to Mount Rushmore, which is located only three miles away. Rich in gold mining history, the quaint town of Keystone was once a boomtown after the discovery of placer gold two miles east of its current location. Placer gold is still thought to exist in abundance but the great depth of the deposits makes it difficult and impractical to reach.

The noble countenances emerge from Rushmore, as though the spirit of the mountain heard a human plan and itself became a human countenance.