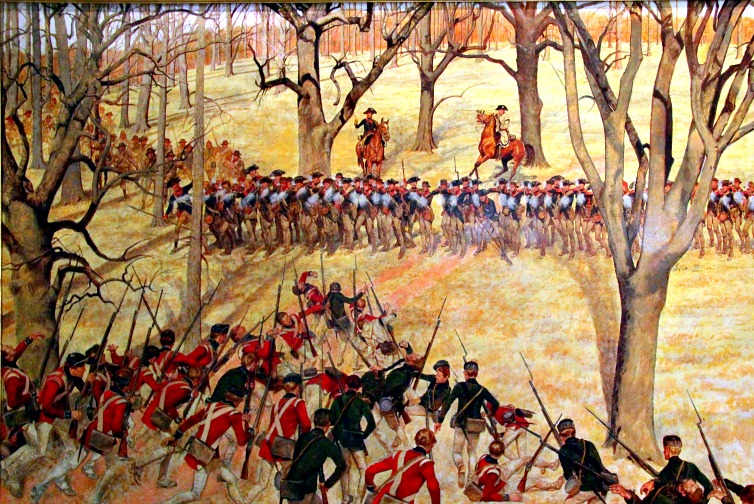 On January 17, 1781, the Americans won a decisive battle against the better-trained British Army. The Battle of Cowpens was over in less than an hour. This battle was the event which started British General Cornwallis on his march north to his eventual surrender at Yorktown just nine months later.

Let’s proceed into the park where the two armies met.

Entering Cowpens Battlefield Park we immediately approach the well maintained visitor’s center. Standing watch over the entrance is a monument dedicated to the valor of the patriots who fought on these fields: “On this field American troops under Brigadier General Daniel Morgan won a signal victory over a British force commanded by Lieutenant Colonel Banastre Tarleton, January 17, 1781”.

After one’s tour of the visitor center the choice is between a walking or a driving tour. Being a pleasant day, we chose the walking tour.

Tarleton marched his troops up the Green River Road in search of the Continentals. Morgan had already chosen the Cowpens, a local grazing pasture surrounding the Green River Road, as the perfect spot to battle the enemy. On January 16, 1781 he awaited Tarleton’s arrival and their moment in history.

Morgan’s battle plan was a brilliant one which didn’t fit the norm of period English warfare. He planned to have his sharpshooters fire a few volleys and then retreat into the safety of the more seasoned troops who brought up their rear. William Washington’s Cavalry would stand in wait for the moment that they were needed to bring their expertise to the fight.

Acting on faulty intelligence indicating the Continentals were planning to retreat across the Broad River, Banastre Tarleton aroused his troops in the wee morning hours of January 17th for a nighttime march up the Green River Road. His plans were to annihilate the Continental Army during the weakness of retreat.

Daniel Morgan’s troops spent the evening of January 16, 1781 resting in his chosen spot of battle, the backcountry cow pasture that locals referred to as Cowpens. Morgan was rallying the troops, moving from campfire to campfire to personally brief each group of soldiers on his battle plan.

As dawn prepared its rise, Tarleton’s advancing army was spotted by Continentals who informed Morgan of their approach. Patriots troops were quickly awakened and readied to meet the enemy.

Tarleton was surprised to see Morgan’s army prepared for battle, rather than in retreat. Daniel Morgan began the execution of his perfect plan.

Morgan and his army turned the flanks of Tarleton’s British army. This classic military tactic, known as a double envelopment, was one of only a few in history. Considered a tactical masterpiece, this battle is frequently studied in military academies around the world.

Although the battle appeared to be clearly favoring the Patriots, Tarleton continued to anticipate an ultimate victory. An impressive personal battlefield confrontation with William Washington proved to be Tarleton’s final Cowpens defeat.

Convinced by associates that his safety was of strategic importance to the British cause, Banastre Tarleton abandoned the fight. He began a withdrawal down the Green River Road in search of the safety of Cornwallis’ camp.

It was one of those special moments in time when destiny is forever changed. The march to Yorktown had begun.

We exit Cowpens National Battlefield with a sense of awe at the accomplishments of Daniel Morgan, Andrew Pickens, William Washington, John Eager Howard, and the brave men they led into battle. The quiet of the Cowpens on a warm November day stood in stark contrast to the bedlam of January 17, 1781.