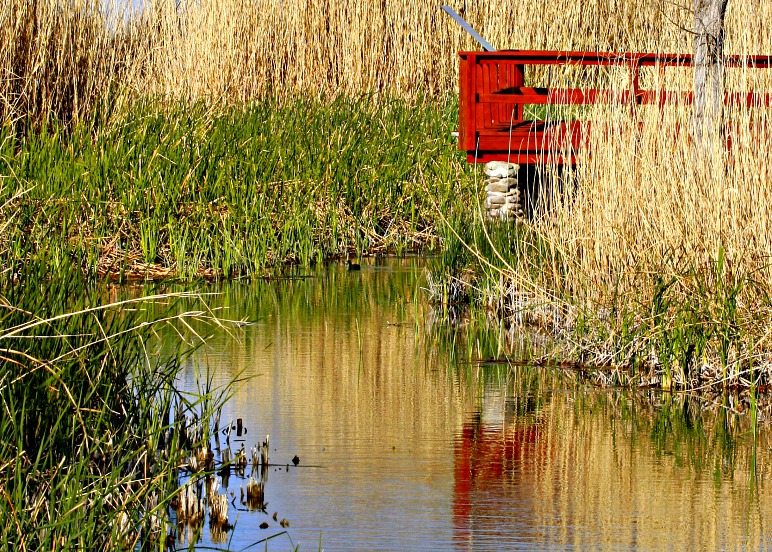 In July, on a 100-degree day in the desert, 562 miles west of Houston, the San Solomon Springs Pool at Balmorhea State Park in Far West Texas, is a favorite place for many RVers and other travelers searching for respite from the hot Texas sun.

The water is so clear it’s like jumping into a dream. The water temperature hovers around 75 degrees, refreshingly cool in the heat of the summer and comfortably warm in winter. It is, in the opinion of many, the best swimming hole on Earth.

Set against the Davis Mountains where the Chihuahuan Desert transitions into the low, flat Permian Basin, the San Solomon complex of springs gush out 15 million gallons of artesian water every day, feeding a canal system that runs to nearby farms and the town of Balmorhea, 4 miles away.

In the mid-1930s, the Civilian Conservation Corps (CCC) built walls around the desert marsh to create the pool. Today, more than 200,000 people stop by every year to swim with fish, waterfowl, and amphibians.

Several years ago when we stopped by in early spring on our route west to Arizona, we had the park to ourselves. But on summer weekends so many people cram into the park that volunteers improvise parking in open fields.

I always figured Balmorhea was too far away from major population centers, too in the middle of nowhere, to get overrun. I was wrong. In recent years, visitation has surged. For families between Van Horn and Odessa, Balmorhea is the one affordable place within 100 miles to cool off and picnic.

Scuba clubs from as far away as Kansas and Arkansas explore the springs on weekends year-round. Fitness buffs motoring coast to coast make detours for a swim.

For almost three months, during the peak summer season, the pool was closed as staff figured out how to fix a collapsed retaining wall below the diving boards.

The closing was sudden and unplanned. During the annual cleaning in early May (2018), Abel Baeza, the manager of the local water district, was directing workers to make repairs in a nearby canal when he heard a noise, then turned around to see the underwater concrete skirting cracking off below the high dive.

The 80-year-old pool, like the nearby adobe San Solomon Springs Motor Courts which are closed during a planned restoration, requires constant upkeep. The concrete repairs were an even bigger deal. A dam had to be constructed to hold back water around the damage during the painstaking process.

“There are five endangered species in the pool, and this is the only population left of this species of black catfish,” said Mark Lockwood, the West Texas regional director for Texas state parks.

“We can’t just open up the gates, let the water dry up everywhere, build a wall, and put it back together.”

In early August, the Texas Parks & Wildlife Department (TPWD) announced that pool repairs would begin imminently, with the cash-strapped agency forced to find creative ways to pay the estimated $2 million bill. Apache Corporation, the company doing most of the fracking exploration around Balmorhea, which some locals and environmentalists believe caused the damage, offered a $1 million matching grant through the nonprofit Texas Parks & Wildlife Foundation.

The Garrison Brothers Distillery pledged a portion of proceeds from its small-batch, $59-a-bottle Balmorhea whiskey. Even for a park as popular as Balmorhea, getting things done these days requires the governmental equivalent of a GoFundMe campaign.

This project is only one of the three major developments underway at Balmorhea State Park. Renovations to the San Solomon Springs Courts and campgrounds have been ongoing since 2017. Once these projects have completed, visitors to Balmorhea will have an enhanced park experience at West Texas’ most treasured oasis.

The Texas Parks and Wildlife Foundation (TPWF) has established a fund to accept donations towards the structural repairs that are needed to reopen the pool. These donations will help ensure that Texans can continue to enjoy this historic spring-fed swimming pool and unique West Texas destination for generations to come.

The park remains open for day-use only with limited facilities.

The restoration of the San Solomon Springs Motor Courts should be finished by spring. The fallen wall in the pool should be repaired any day now. I’m standing by.

Another sunny 70 degree fall or spring day with little wind will do just fine. Odds are, we’ll have the park all to ourselves.

If you wait until next summer, y’all will be waiting in line with the rest of y’all.