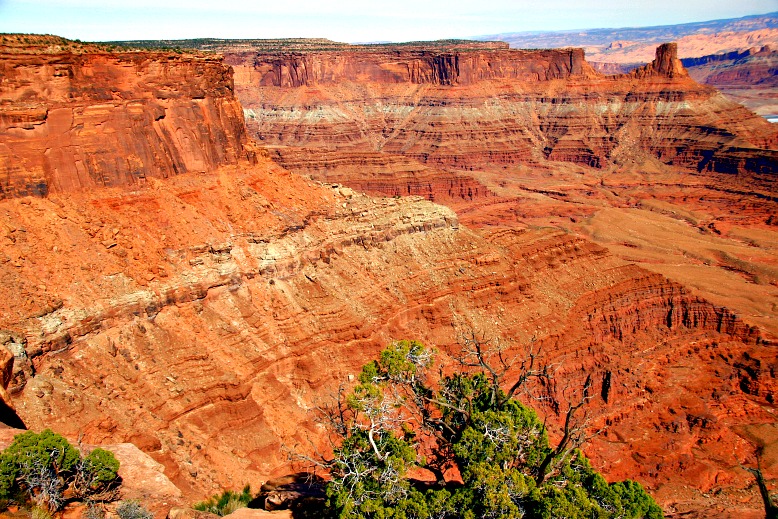 The park lies on the same broad mesa as The Island in the Sky district of Canyonlands National Park. Featuring immense cliffs carved by the elements and stunning overlooks, Dead Horse Point State Park draws you in with its breathtaking landscapes, dark starlit skies, and rich history.

Dead Horse Point is a peninsula of rock atop sheer sandstone cliffs about 6,000 feet above sea level. Two thousand feet below, the Colorado River winds its way from the continental divide in Colorado to the Gulf of California, a distance of 1,400 miles. The peninsula is connected to the 8umesa by a narrow strip of land called the neck.

Water is limited. Visitors should fill their recreation vehicle water tanks before coming to the park. This campground is not suitable for large RVs.

For those seeking an extra special overnight experience, the park also offers yurts that sleep six and feature a propane fireplace, kitchen area, outside grill, lighting, and electricity.

The plants and animals of Dead Horse Point have adapted to a land of scarce water and extreme temperatures. Plants grow very slowly here. Trees 15 feet tall may be hundreds of years old. Leaves of most plants are small, and some have a waxy coating to reduce evaporation.

Most desert animals are nocturnal, active only during cooler evenings and mornings. Some have large ears to dissipate heat while others metabolize water from food.

With Moab nearby, mountain bikers visiting the park can rest assured their bikes are permitted on the park’s paved roads.

For a more adventurous biking experience, bikers can also test their skills down the Intrepid Trail located near the park’s visitor center. With slickrock sections, looping singletrack, sandy washes, and incredible scenery, the Intrepid Trail System provides a great taste of what Moab mountain biking is all about. This is the perfect ride for families and offers spectacular views of the Colorado River and Canyonlands National Park.

The Intrepid Trail System has three hiking and biking loops ranging from one to nine miles with varying degrees of difficulty. The easiest and shortest loop is Intrepid, followed by Great Pyramid, with Big Chief as the most challenging. The nested loop trails will offer opportunities for visitors of all ages and abilities, and provide breathtaking views.

Dead Horse Point is a peninsula of rock atop sheer sandstone cliffs. The peninsula is connected to the mesa by a narrow strip of land called the neck. There are many stories about how this high promontory of land received its name.

According to one legend, the point was used as a corral for wild mustangs roaming the mesa top around the turn of the century. Cowboys rounded up these horses and herded them across the narrow neck of land and onto the point. The neck, which is only 30 yards wide, was then fenced off with branches and brush. This created a natural corral surrounded by precipitous cliffs straight down on all sides, affording no escape. Cowboys then chose the horses they wanted and let the culls or broomtails go free. One time, for some unknown reason, horses were left corralled on the waterless point where they died of thirst within view of the Colorado River, 2,000 feet below.

Dead Horse Point is best photographed at sunrise. For the warmest light, shoot between May 1 and mid-August, when the sun rises north of the La Sals, or from late October to mid-February, when it rises to the south.

Four view areas, ideal for photography stops, are located along the highway.

Dead Horse Point is reached by following the same route as the Island in the Sky District of Canyonlands National Park. It is 23 miles from U.S. Highway 191 to Dead Horse Point State Park via Utah Highway 313.

Happiness is not a station you arrive at, but a manner of traveling.