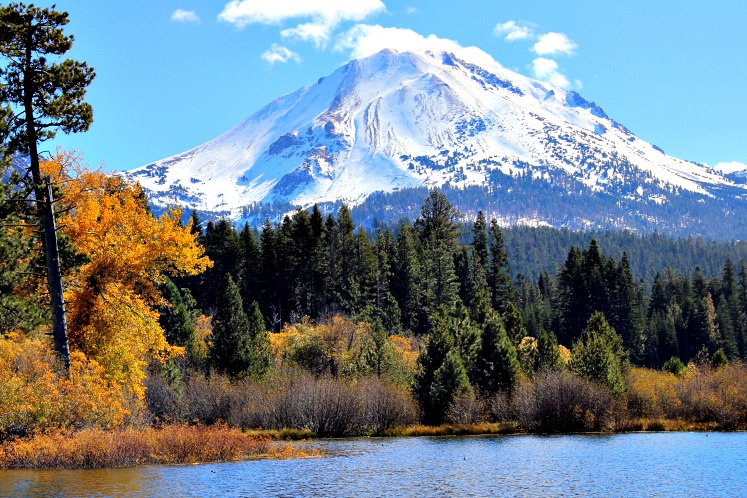 When it comes to National Parks with steamy geothermal features, people usually think of Yellowstone National Park—but it’s certainly not the only park that’s hot to trot.

On June 14, 1914, three men climbed Lassen Peak to see why a seemingly dormant volcano had started rumbling 16 days before. Now, peering into a newborn crater, they felt the ground tremble. As they turned and ran down the steep slope, the mountain erupted. Rocks hurtled through the ash-filled air. One struck a man, knocking him out. Ashes rained down on the men. They seemed doomed. But the eruption stopped as suddenly as it had begun, and the three men survived.

From 1914 to early 1915, Lassen spewed steam and ashes in more than 150 eruptions. Finally, on May 19, 1915, the mountaintop exploded. Lava crashed through the 1914 crater. A 20-foot-high wall of mud, ash, and melted snow roared down the mountain, snapping tree trunks.

Three days later, a huge mass of ashes and gases shot out of the volcano, devastating a swath a mile wide and three miles long. Above the havoc, a cloud of volcanic steam and ash rose 30,000 feet.

Eruptions of steam, ash, and tephra continued until June 1917, when the volcano resumed its quiet profile, with minor steam clouds occasionally reported. Since 1921, Lassen Peak has remained quiet. But it is still considered an active volcano, the centerpiece of a vast panorama, where volcanism displays its spectaculars—wrecked mountains, devastated land, bubbling cauldrons of mud.

Lassen Volcanic National Park is one of the only places in the world that has all four types of volcanoes—cinder cone, composite, shield, and plug dome—so you know a park that’s packing that much heat is definitely gonna have some cool sights to see. Here are some of the park’s best other-worldly landscapes and hidden gems to explore.

Explore the Hydrothermal Areas. Boiling pools, steam rising from the ground, bubbling mud pots—these are just some of the types of hydrothermal areas that can be found within Lassen Volcanic National Park. One of the most popular of the park’s natural attractions is Bumpass Hell, a 16-acre bowl of mud pots, pools, and steam vents accessible via a three-mile roundtrip hike.

Others to check out include Devil’s Kitchen, Boiling Springs Lake, and Cold Boiling Lake.

Sulphur Works is a trail that will get you a little closer to the bubbling mudpots and steaming pools. It’s also right off the main road, so if you’re short on time but still want to check out some hot and heavy geothermal weirdness, this is your best bet. The main attraction here is a 5-foot mudpot—it’s all that remains of an extinct volcano known as Mount Tehama. Definitely be cautious here—this is an area known for looking deceptively safe, but stepping off the boardwalk could mean falling into boiling mud.

Go for a drive and see Lassen Volcanic from the comfort of your car—the 30-mile Lassen Volcanic National Park Highway is a terrific way to do just that. Allow at least an hour to do the drive non-stop, or build in more time to stop at the various highlights along the way, including Bumpass Hell Overlook where you can see the former Brokeoff Volcano, or Mt. Tehama; Kings Creek Meadow Scenic Pull-out; and Hat Creek, which is a must during fall foliage, to name just a few.

Do hike to the peak. Lassen Volcanic National Park offers more than 150 miles of hiking trails, ranging from easy to strenuous. The keystone of the park is the peak itself, and the recent completion of the four-year Reach the Peak project restored the five-mile roundtrip Lassen Peak Trail. The hike is strenuous. Allow six hours for a terrific family experience with fantastic views of the valley and the High Sierras from the top.

Take the subway. Take the self-guided trail to Subway Cave, which is in Lassen National Forest and accessible via the Volcanic Legacy Scenic Byway, near the town of Old Station. The cave was formed about 20,000 years ago when lava flow from Hat Creek cooled and hardened on top, while hot lava continued to flow underneath, eventually leaving tube-like caves.

Miles of its flanks are reeking and bubbling with hot springs, many of them so boisterous and sulphurous they seem ever ready to become spouting geysers…