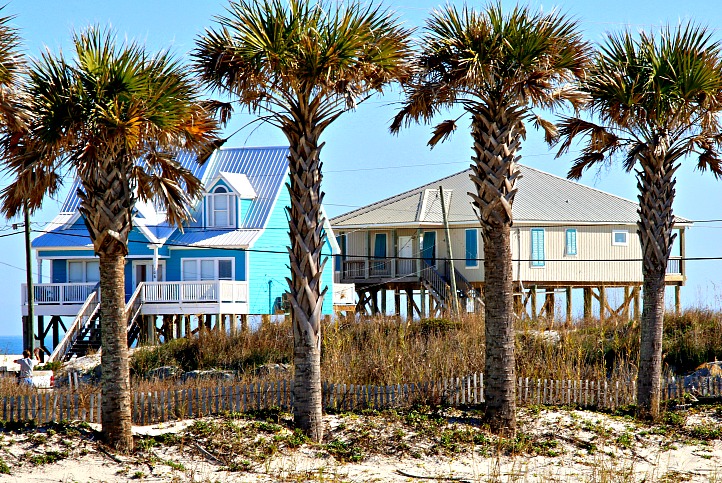 So you’ve done the Grand Canyon, Disney World, and Vegas. When you are in the mood for less “been there, done that” and more “under-the-radar hidden gem,” we have your back.

When it comes to hidden vacation spots, you can’t get much more hidden than an island. Known as the “sunset capital of Alabama,” the island town of Dauphin is home to quiet, lapping waves, the 164-acre Audubon Bird Sanctuary, plenty of boat launch sites, and the educational Dauphin Island Sea Lab for the kiddos.

The South is rife with underrated vacation spots. Once named the “South’s best hotel” by Southern Living, this historic island resort is a balmy, romantic slice of the Gilded Age. Follow in the footsteps of visitors like J.P. Morgan and the Pulitzer family as you golf, bike, boat, swim, or trot along on a horse-drawn carriage.

If you want to see the South Carolina coast the way the original settlers did, take a step back in time at Botany Bay Plantation Heritage Preserve on Edisto Island. The 4,600-acre preserve includes almost three miles of undeveloped, breathtaking beachfront that you’ll never forget. This wildlife management area exhibits many characteristics common to sea islands along the southeast coast: pine hardwood forests, agricultural fields, coastal wetlands, and a barrier island with a beachfront.

From the four faces carved high on Mount Rushmore and the Cathedral Spires of Custer State Park to the wondrous caverns of Wind Cave, from the otherworldly Badlands in the east to Devils Tower in the west—the Black Hills are home to many truly monumental places. But that’s only some of what you’ll find there.

After you take a Tennessee vacation, your friends might expect stories of country music and BBQ. Instead, regale them with stories of Chattanooga’s Incline Railway, which takes you and family up a 72.7-percent grade on Lookout Mountain. It’s like driving up an insanely pretty wall. At the bottom incline station in St. Elmo, you will find a great collection of unique shops, restaurants, and attractions including a microbrewery and collection of cafes and small-batch boutiques.

Imagine a place where three rivers roar and wildlife sightings are common. The place you imagine is Wells Gray Provincial Park with more than 1.2 million acres of alpine wilderness, borne from volcanoes and carved by glaciers. One of the most unique landscapes in B.C., Wells Gray is a world class destination for canoeing, rafting, kayaking, fly-fishing, hiking, camping, and horseback riding. Ancient volcanoes and slow-moving glaciers carved the rivers and lakes that fuel the Park’s 39 named waterfalls.

Utah: The Backcountry of Bryce Canyon

For hardcore hikers and those in search of sumptuous solitude, the Backcountry of Bryce Canyon National Park boasts strenuous trails surrounded by red cliffs and pink plateaus at elevations up to 9,115 feet. The 22.9-mile Under-the-Rim Trail is a highlight, connecting Bryce Point to Rainbow Point.

A comparatively little-known canyon, Canyon de Chelly (pronounced “de shay”) has sandstone walls rising up to 1,000 feet, scenic overlooks, well-preserved Anasazi ruins, and an insight into the present day life of the Navajo, who still inhabit and cultivate the valley floor. The northernmost and southernmost edges are accessible from paved roads. The South Rim Drive offers the most dramatic vistas, ending at the most spectacular viewpoint, the overlook of Spider Rocks—twin 800-foot towers of rock isolated from the canyon walls.

The attraction of recreational vehicle travel is to see the country, experience the freedom of the open road, and discover under-the-radar hidden gems.