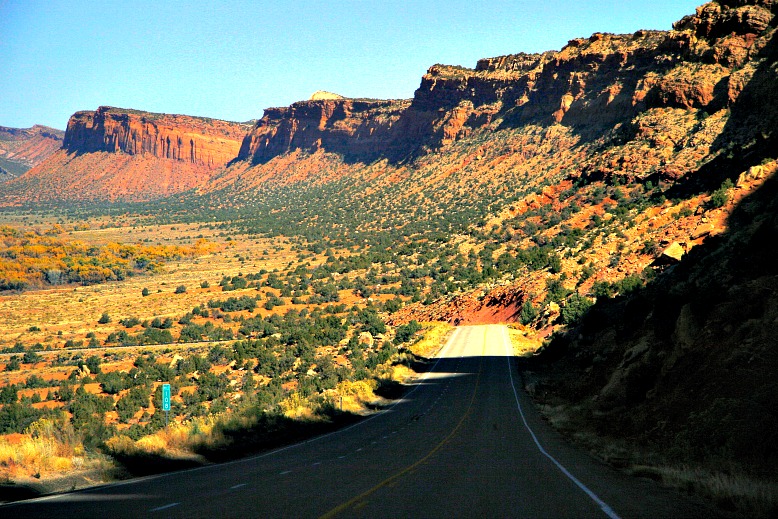 Since Jack Kerouac and his compatriots road tripped down American highways in the 1950s and infused our culture with the fantasy of freeway freedom, the cross-country road trip has established itself as a summer must-do.

Yet while it remained firmly entrenched in the American consciousness, the actual practice of road tripping as a popular vacation choice declined from the early 1970s to the early 2000s as the travel industry packaged family vacations at affordable rates for middle-class families.

But as interest in adventure, sustainability, and the oft quoted “authentic” experience increased, sitting in an RV drinking Arizona Iced Tea and driving a scenic byway seemed more appealing to today’s travelers than sipping watered-down piña coladas at an all-inclusive beach resort.

Plus: in the land of the free, what could be more liberating than a full tank of fuel and the open road?

Just get out and enjoy the ride, on these and other scenic routes in the sprawling, beautiful United States of America.

This road trip takes thrill-seekers to six national parks including Zion, Bryce Canyon, Capitol Reef, Arches, Canyonlands, and the Grand Canyon. Other natural wonders on the route include Monument Valley and Lake Powell, a winding reservoir rather than a lake. Road trippers will have a one-of-a-kind adventure with views of desert lakes and barren mountains, and experiences like guided horseback tours, ATV trails, and river guides.

This short stretch of road serves as an entrance to an old plantation, but A) it’s really, really creepy in a Sleepy Hollow kind of way, and B) it’s located on Edisto Island, which is one of the most beautiful places in all of South Carolina.

The 6.5-mile route begins along a magnificent avenue of oaks interspersed with loblolly pine and cabbage palmetto, the state tree. Look for colonies of resurrection fern growing on the spreading oak limbs. After a rain, the leaves of the resurrection ferns turn a beautiful bright green.

West Virginia’s hilly terrain isn’t just pretty to look at, it had a huge effect on the nation’s prosperity as a coal-mining region. As you go up and down hills, and across gorges on bridges like the awesome New River Gorge Bridge (shown above), you’ll also see the remnants of that mining tradition in the form of the ongoing reclamation projects, and closed mines.

One of the most scenic roads in America, the Blue Ridge Parkway is a 469-mile road that winds along the crest of the Appalachian Mountains providing an unique view of picturesque landscape and history. The Parkway connects Virginia’s Shenandoah National Park at the north end with North Carolina’s Great Smoky Mountains National Park at the south end.

Really, Skyline is part of the same road as the Blue Ridge Parkway, and you can guess why it’s called Skyline just from looking at the above photo. The speed limit here is 45 mph, and Virginia is infamous for its speed-limit enforcement, so this one’s really all about what you can look at as you crawl along.

This 68-mile byway will lead you on a delightful adventure as it winds its way around spiraling “pig-tail” shaped bridges, through six rock tunnels, among towering granite pinnacles and over pristine, pine-clad mountains. Highlights include Mount Rushmore, Harney Peak, Sylvan Lake (pictured above), the Needle’s Eye, and Cathedral Spires rock formations.

This is certainly one of the most storied roads on this list. El Camino Real was first used by Spanish explorers in the late 16th century, but it’s also home to some pretty righteous rock formations.

Let’s Go RVing! Moss is starting to grow on my non-rolling stone! It is definitely time to get back in the RV and out on the open road.