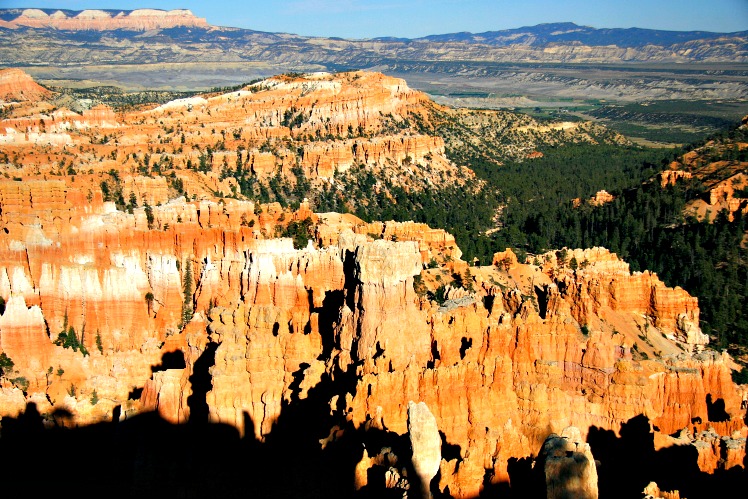 These tall, irregular spires of rock created through erosion usually protrude upward from dry bottomland, and Bryce Canyon National Park offers the most abundant concentration of them in the U.S. Hoodoos range in stature from 6 feet to as tall as a 10-story building, but Bryce Canyon’s hoodoos are being slowly worn away by the same forces of erosion that formed them.

Mormon pioneer Ebenezer Bryce who ranched in the area described the canyon that bears his name as “a hell of a place to lose a cow”. But the rest of the world knows the canyon as a vast wonderland of brilliant-colored spires, rising like sentinels into the clear sky above.

Bryce Canyon isn’t really a canyon. Rather it is a “break” or series of horseshoe-shaped amphitheaters carved from the eastern slope of the Paunsaugunt Plateau in southern Utah.

Erosion has shaped colorful Claron limestones, sandstones, and mudstones into thousands of nature-chiseled spires, fins, pinnacles, and mazes. Collectively called “hoodoos”, these unique formations are whimsically arranged and tinted with colors too numerous and subtle to name.

Bryce Canyon’s warm days and cold nights result in more than 200 days a year in which accumulated rainwater completes a freeze-thaw cycle. During the day, water seeps into cracks in the rocks, and then at night, it freezes and expands. As this process repeats, it breaks apart weak rock, and over time, chisels the unusual formations.

If you’re traveling through southern Utah, you’ll want to visit this land of the hoodoos. The only access to Bryce Canyon is via Scenic Byway 12 (an All-American Road), which is a winding road that climbs to high elevations in spots. The entire highway is paved, well maintained, and kept open year-round.

The best place to begin a tour of the park is at the visitor center. Located just 1.5 miles inside the park, the visitor center provides maps and directions, plus information regarding weather, ranger activities, and the Junior Ranger program. There’s also a 20-minute orientation film and a museum with exhibits that display facets of the park’s geology, flora, fauna, and history.

Bryce is a compact park—just 56 square miles—which makes it easier to explore than many national parks in the West.

Hiking is the best way to experience the stunning mazes. The park has over 50 miles of hiking trails with a range of distances and elevation change. Most of the park’s trails range from half a mile to 11 miles and take less than a day to complete. Most trails descend into the canyon and wind around the oddly shaped formations. In just a few hours on the trail, you can experience Bryce Canyon’s spectacular scenery.

But a word of caution: Many trails that descend to the bottom are moderate to steep, making the return part of the hike—which is uphill—the most strenuous. Bryce’s high elevation requires extra exertion, so assess your ability and know your limits. Wear hiking boots with good tread and ankle support and carry plenty of drinking water to avoid dehydration.

Sunset Point begins the trailhead for the popular 1.3-mile Navajo Loop which descends through Wall Street. There, hikers travel between the narrow 200-foot canyon cliffs, and along the way pass by a miracle of nature—two 500- to 700-year-old Douglas firs that have managed to grow from the narrow slot canyon floor to reach the sliver of sunlight at the top.

But if hiking isn’t your thing, you can still enjoy the landscape from the overlooks on the main park road, which heads 18 miles along a winding corridor through forests and meadows to the park’s southern end.