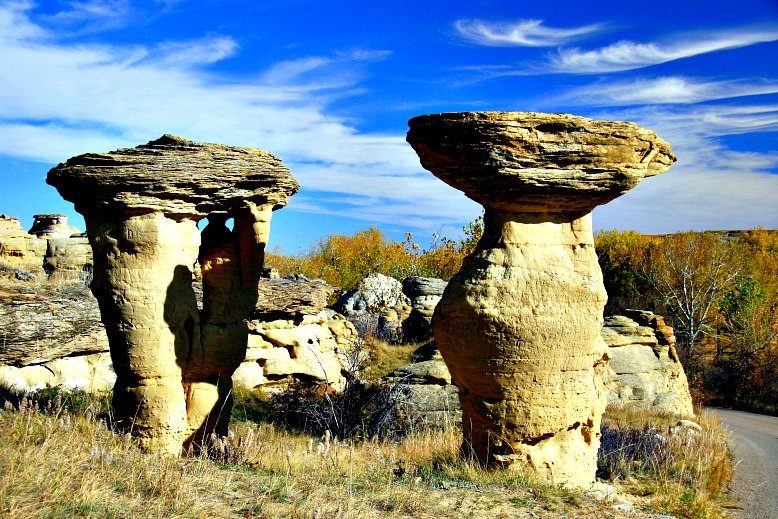 You’re driving through the prairie and suddenly it drops away into a beautiful river valley. Alberta has many beautiful places to explore during the summer but there’s only one place that has rock paintings from the local indigenous population that can be dated back 2,000 years ago.

That very special place is the Writing-on-Stone/Áísínai’pi Provincial Park and is located near the U.S. border in southeastern Alberta. It is a place of extreme cultural importance to the Blackfoot people and has the greatest concentration of Indigenous rock art anywhere on the plains. The rock art was likely created by the Blackfoot tribe whose territory traditionally includes the area. At least some of the art was likely being made by the Shoshone tribe which passed through the region.

In a dramatic landscape of steep-sided canyons and coulees, sandstone cliffs, and eroded sandstone formations called hoodoos, Indigenous peoples have created rock art for millennia. Thousands of petroglyphs and pictographs at more than 138 rock art sites graphically represent the powers of the spirit world that resonate in this sacred landscape and chronicle critical phases of human history in North America including when Indigenous peoples first came into contact with Europeans. In fact, the arrival of horses, trade items, and even the first automobile in the region are creatively recorded.

With a combination of culturally significant landforms, rock art, archaeological heritage, and dramatic views, Áísínai’pi (“it is pictured/written”) is a sacred place for the Blackfoot people. In Blackfoot traditions, Sacred Beings dwell among the cliffs and hoodoos, and the voices of the ancestors can be heard among the canyons and cliffs. To this day the Blackfoot feel the energy of the Sacred Beings at Writing-on-Stone/Áísínai’pi and their oral histories and ongoing ceremonial use attest to the living traditions of the Blackfoot people.

Following more than a decade of advocacy by Indigenous groups and the provincial government, Writing-on Stone was recently (July 6) declared a World Heritage Site by the United Nations Educational, Scientific and Cultural Organization (UNESCO).

The nomination was prepared by the provincial government in partnership with the Blackfoot Confederacy and with ongoing support from the Government of Canada.

Writing-on-Stone Provincial Park is home to more petroglyphs (rock carvings) and pictographs (rock paintings) than any other place on the Great Plains in North America.

“Writing-on-Stone/Áísínai’pi is the site of many natural wonders and a testament to the remarkable ingenuity and creativity of the Blackfoot people,” Jason Nixon, Minister of Environment and Parks, said in a news release. “It’s easy to see why the site is seen by many as an expression of the confluence of the spirit and human worlds. I hope all Albertans will take the time to explore this extraordinary part of the province and all it has to offer.”

“The designation of Writing-on-Stone/Áísínai’pi as a UNESCO World Heritage Site provides the Blackfoot Confederacy a basis for its future generations as to the strength and truth of our continuing relationship to this land and to our traditions, ceremonies, and cultural practices,” Martin Heavy Head, an elder with the Mookaakin Cultural and Heritage Society, said in a news release.

Writing-on-Stone is about 4,400 acres and offers unique hiking and birding opportunities, plus a modestly-sized campground. The province estimates about 60,000 people visit the site each year.

So if you’re a fan of exploration these are the six must see sites within Alberta.