Born of volcanoes and carved by glaciers 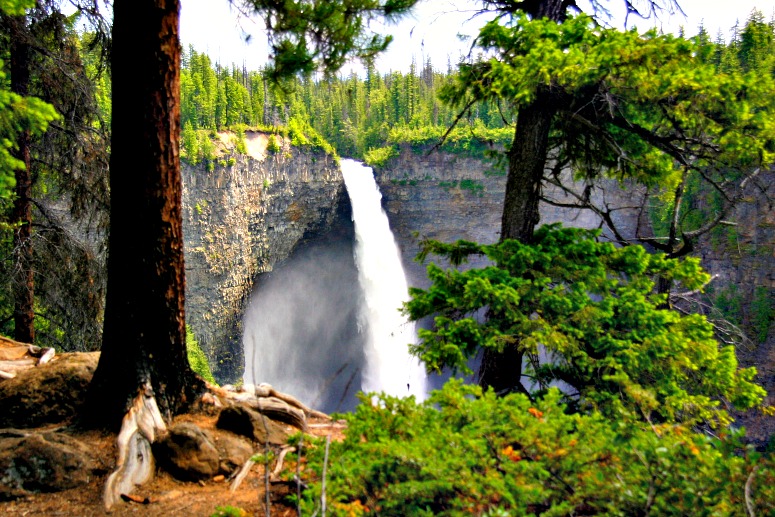 Many people head to Wells Gray for the lakes, but there are also over 40 named waterfalls in the park. Many of them are in remote corners of the park, but eight of them are easy to reach from the Clearwater Valley Road.

So you might be wondering: Why are there so many waterfalls all in the same small area? And how did they form? It turns out the waterfalls in Wells Gray use the same secret formula as another favorite waterfall destination, Iceland: volcanoes + glaciers = waterfall magic.

The whole Wells Gray area is part of a massive volcanic complex that dumped lava over the landscape, which hardened into lava rock called basalt. During the last ice age, glaciers covered the basalt. When the volcanoes erupted underneath the glaciers, the ice melted, causing huge floods that carved deep river canyons.

Now, the volcanoes are dormant and the glaciers are gone, but the river canyons remain. The waterfalls in Wells Gray continue to erode the river canyons, pushing the canyons further and further upstream. Compared to granite, basalt is relatively weak and erodes quickly, which is why it is common to find waterfalls in volcanic areas.

Seven of the Park’s waterfalls originate on the Murtle River, but perhaps none are more famous than Helmcken Falls, and the very reason Wells Gray Park exists.

The fourth largest waterfall in Canada, Helmcken cascades 462 feet to the canyon below. The fact you can access it just steps from the road is really an added bonus. The viewing platform hangs over the lip of the canyon providing a panoramic view of the Murtle River tumbling in the distance. For an up-close-and-personal view of the falls, strike out on a one-hour hike along the Rim Trail where you’ll find waterfall views seen mostly by birds.

Dawson Falls, one of seven waterfalls tumbling down the Murtle River, stretches its watery veil 295 feet across ancient lava beds creating a shallow, but broad cascade of water.  Although you’re walking mere feet from the Clearwater Valley Road, the dense forest mutes all but the sound of rushing water. You’ll spy Dawson Falls after about 10-minutes in; then continue along the trail for a different vantage point at the top of the falls.

If you’ve ever wondered what lies behind the veil of a waterfall, you’ll want to explore Moul Falls. A one-hour hike from Clearwater Valley Road, a moss and roots covered trail brings you to the edge of Grouse Creek where Moul Falls spills into the Clearwater River. You can stop at the viewing platform above, but if you’re really adventurous, you’ll continue down to the base of the chute where you can slip between the falls and the canyon reveling in the cool mist of its cold, rushing waters.

Volcanic rock deposits left centuries ago form the layer-cake-like canyon at Spahats Falls, makes it one of the most dramatic waterfalls to photograph in the Park. You’ll find the turn-off to the falls just inside the Park’s gate. Stroll the cool hemlock and cedar forest for about five minutes and you’ll spot the falls cascading from a keyhole in the rock face, 260 feet above the Clearwater River.

Wells Gray is also newsworthy for the recent discovery of the most insane cave hidden in the park. The cave is one of the largest in Canada and it’s pretty amazing that it went unnoticed for so long. Until BC Parks and local First Nations are able to assess the cave, it’s closed to the public and you definitely should not go looking for it.

This is one of the most awe-inspiring parks for the outdoors enthusiast! If you only make it out to one park this summer, make it Wells Gray.

There’s no better place to find yourself that sitting by a waterfall and listening to its music.