Some 23 million years ago multiple volcanoes erupted, flowed, and slid to form what would become Pinnacles National Park 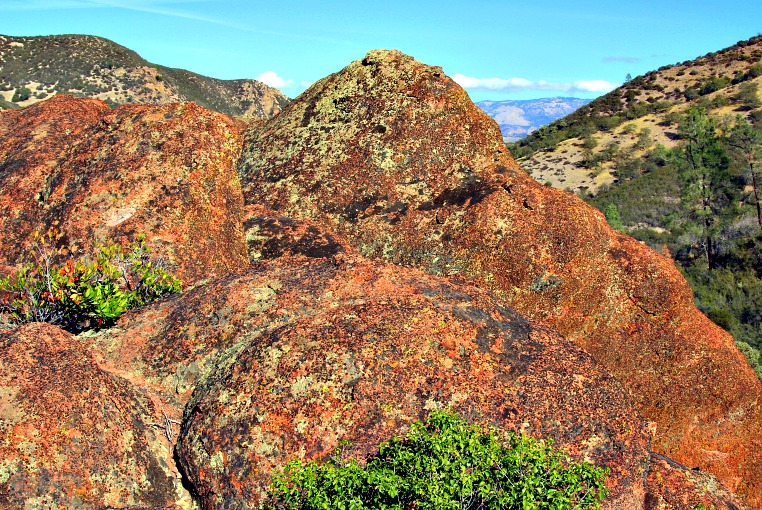 The difference is immediately apparent. You know at once why this park is called Pinnacles. Here you face spires and crags that bear no resemblance to the surrounding smooth, round hills. Abruptly, the pinnacle rock formations dominate the scene.

These rocks are the remains of an ancient volcano. Or rather they are part of the remains, for the rest of this volcano lies 195 miles to the southeast. Sound intriguing? It is all part of the story of the San Andreas Rift Zone, which runs just east of the park, and the geological forces that have shaped the face of the landscape in this part of California for millions of years. It is the story of heat, frost, water, and wind wearing at the rock.

The remains of an ancient volcanic field consisting of massive monoliths, rocky spires, pinnacles, red crags, and talus cave, rise out of the Gabilan Mountains, a sanctuary for the California condor.

This field of fire was then split down the center by the San Andreas Fault and the west side traveled 195 miles north at a rate of 1-3 inches each year, all while being worn away by water, weathering, and chemical erosion.

What remains is a landscape unlike any other. The result of these millions of years of fire, ice, and upset are the serene rock formations visited by 250 thousand visitors each year. Travelers journey through grasslands, chaparral, oak woodlands, and canyon bottoms.

Hikers enter rare talus caves and emerge to towering rock spires teeming with life: Prairie and Peregrine falcons, Golden eagles, as well as the inspiring California condor. Strange, the way a violent and dynamic past has resulted in such a peaceful landscape for today’s hikers and climbers.

Pinnacles have over 30 miles of trails that show the best of the park and of the rock formations for which it was named. Hike through the caves, through grasslands, and mountainous areas or up close to the spires and pinnacles. Park staff can recommend the perfect trails based on your available time, physical fitness, and access. Due to the terrain, most of the trails offered are either moderately difficult or strenuous.

The Pinnacles visitor center to the Bear Gulch day use area is an interesting trail that is about 2 miles one way and takes about one and a half hours to complete. Visitors will walk along creeks and climb about 300 feet in elevation.

Another trail leads from the visitor center to Balconies Cave which is about 9 miles round-trip. Bring a flashlight as hikers will pass by the cave on the way back. There are fantastic views of some of the largest rock formations in the park along this trail.

Follow the path leading from Condor Gulch to High Peaks Loop that is about 5 miles round trip. Be prepared to climb over 1,000 feet in elevation along this trail, but visitors will be treated to a walk through the heart of the pinnacles formations in the park.

The Balconies Cliffs and Cave Loop Trail is an amazing experience that crosses up and over Balconies Cave and then leads back through the cave itself. Be prepared to get wet as some wading might be necessary if rain occurs and water fills parts of the cave. Don’t forget your flashlight on this trail as the cave is dark.

There are numerous other trails to explore in Pinnacles National Park. Crawl through caves or gaze up at the towering spires created millions of years ago at this relatively new and wondrous national park.

Looking back across the long cycles of change through which the land has been shaped into its present form, let us realize that these geographical revolutions are not events wholly of the dim past, but that they are still in progress.