Come discover this land of fire and ice! 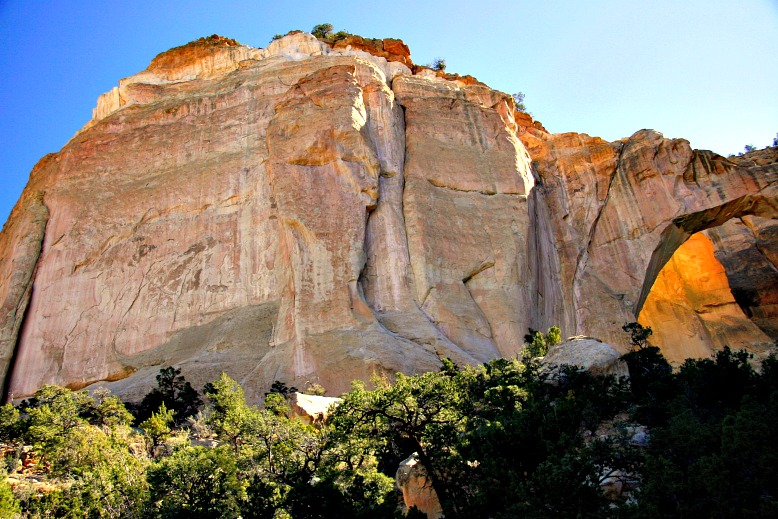 The richly diverse volcanic landscape of El Malpais National Monument offers solitude, recreation, and discovery. There’s something for everyone here. Explore cinder cones, lava tube caves, sandstone bluffs, and hiking trails. While some may see a desolate environment, people have been adapting to and living in this extraordinary terrain for generations.

Known as “the badlands” in Spanish, El Malpais was used by early Spanish map makers to describe areas of volcanic terrain. El Malpais preserves an ancient volcanic landscape and a history of human habitation.

Lava that once poured from five separate magma flows produced the black, ropy pahoehoe, and clinkers of a thousand years ago. Islands of earth that were surrounded, rather than covered, by lava are spots of undisturbed vegetation called kipukas.

El Malpais National Monument and Conservation Area was established in 1987. Its 114,277 acres is managed in a joint effort between the National Park Service and the Bureau of Land Management (BLM). El Malpais hosts more than 100,000 visitors annually; visitation is highest in July and August and lowest in December and January.

Many points of interest are accessible from New Mexico Route 117. The Sandstone Bluffs Overlook is reached by a short walk from a parking area along the highway. Excellent overviews of the lava flows as well as the surrounding terrain are seen from this vantage point.

You can look south to the Zuni-Acoma Trail, a 15-mile round-trip hike over the rugged Anasazi trade route, which crosses four of the five major lava flows.

In El Malpais many trails are actually routes marked with cairns. Instead of a well-defined path clearly visible on the landscape, a series of rock piles called cairns are used to trace a route across the land. These routes are common on lava landscapes, where creating a traditional trail or footpath is not possible due to the extreme nature of the terrain.

Hiking cairned routes requires more attention to navigation. As you travel, make sure you have the next cairn in sight before leaving the one that you are at. Keep your eyes on the land while walking; the uneven nature of the terrain demands that you pay more attention since the surface is not even.

To enjoy the views, stop, get a secure footing, and then look around. Look back frequently to stay familiar with the landscape as it changes. Sturdy hiking boots are advised as is ample drinking water.

La Ventana Natural Arch, the largest of New Mexico’s accessible natural arches, is visible from the parking lot. Trails lead up to the bottom of the free-standing arch for a closer look at this natural wonder.

East of the highway are some 62,000 acres of lush, pine-covered rimrock called the Cebola Wilderness. Exploration of this area of the park will reward visitors with prehistoric petroglyphs and historic homesteads.

Continuing down the highway, you’ll drive through The Narrows; here lava flowed past the base of 500-foot sandstone cliffs. A picnic area is located here, and hikers will be intrigued by the unusual lava formations they’ll find.

At the Lava Falls Area, you can explore the unique features of the McCarty’s flow and marvel at the plant life that is adapted to life in the lava.

If you have a high-clearance vehicle, you can drive to the Big Tubes Area, where you can explore two of the network of gigantic caves formed by the flowing lava: Big Skylight and Four Windows.

In the area known as Chain of Craters, 30 cinder cones can be found across the landscape.

Come discover this land of fire and ice!

We simply need that wild country available to us, even if we never do more than drive to its edge and look in, for it can be a means of reassuring ourselves of our sanity as creatures, a part of the geography of hope.