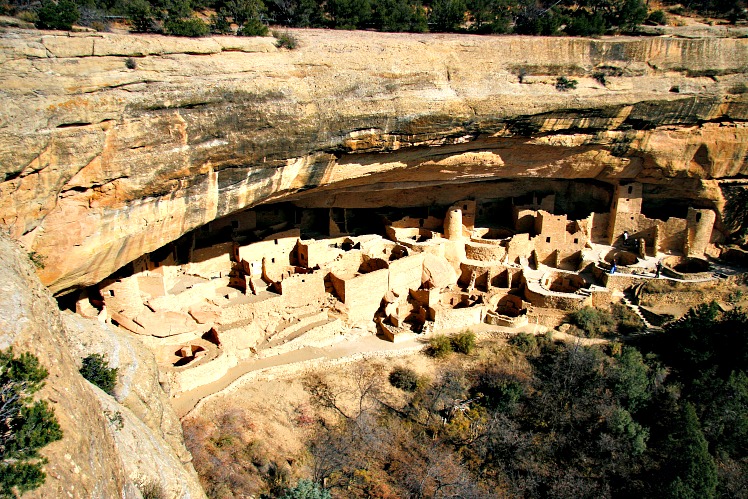 Most of the national parks in the Southwest are about the landscapes, but Mesa Verde in southern Colorado is more cultural than natural.

There’s still plenty of rugged scenery, but there are also more than 4,000 archaeological sites contained within Mesa Verde’s boundaries.

Mesa Verde, Spanish for “green table”, offers a spectacular look into the lives of the Ancestral Pueblo people who made it their home for over 700 years, from AD 600 to 1300. Today the park protects these sites, some of the most notable and best preserved in the U.S.

Fourteen centuries of history are displayed at Mesa Verde National Park, 10 miles east of Cortez off U.S. Highway 160. More than 4,000 archaeological sites have been preserved, including hundreds of homes and villages that date back to the 12th century.

These master builders constructed elaborate complexes tucked into sandstone cliffs. Some held just a few people, while others, such as the Cliff Palace and Long House, have 150 rooms and could have housed up to 100 people.

Mesa Verde is a World Cultural Heritage Park, a designation granted by UNESCO to preserve and protect the cultural and national heritage of certain international sites. Mesa Verde has also been selected the number one historic monument in the world by readers of Condé Nast Traveler, and was chosen by National Geographic Traveler as one of the “50 places of a Lifetime—The World’s Greatest Destinations.”

Mesa Verde does not lend itself to a hurry-up visit. To truly appreciate the park and to visit several of the cliff dwellings, plan to spend a minimum of two days at the park. It takes time to savor the magic of its eight centuries of prehistoric Indian culture. As a vintage slogan at the park advises: “It’s a place where you can see for 100 miles and look back in time 1,000 years.”

The intricate architecture is as awesome to behold today as it was when cowboys and ranchers first saw it. Two men looking for lost cattle, Richard Wetherill and Charles Mason, came upon the most spectacular site, the 150-room Cliff Palace, in 1888. Mesa Verde was designated as a national monument by President Theodore Roosevelt 18 years later, in 1906.

From Mesa Verde’s entrance a two-lane paved road winds upward 2,000 feet through piñon-juniper forests and canyons. At Park Point, on the northern edge of the mesa at 8,600 feet, the visitor is treated to a panoramic view of the Montezuma Valley to the west, and the Mancos Valley, framed by the 14,000-foot San Juan and La Plata mountains to the east.

At Far View, the road divides. The west fork leads to Wetherill Mesa and a number of major cliff dwellings, including Long House, second largest at Mesa Verde. The south fork leads to Park Headquarters on lower Chapin Mesa and the major cliff dwellings of Cliff Palace, largest in the park, Spruce Tree House (closed to the public), Balcony House, Square Tower House, and others.

Spruce Tree House is the best preserved cliff dwelling in the park, but falling rocks from a sandstone overhang have kept the more than 700-year-old structure closed since October 2015.

Due to the complexity of the project and the significance of Spruce Tree House cliff dwelling, there is a four-phase sequential approach planned.

In early 2017, the park service contracted with a geotechnical firm to conduct Phases One and Two. This assessment will result in recommendations for treatment that, if necessary, will use modern engineering technology to ensure that the alcove is stable and safe for public visitation.

Currently, Spruce Tree House can be seen from overlooks near the Chapin Mesa Archeological Museum

Mesa Verde offers great camping just 4 miles inside the park at Morefield Campground. Because there are 267 sites, there’s always plenty of space. The campground rarely fills. But if you want one of the 15 full-hookup sites, reservations are a must.

Mesa Verde is open year-round, but actual schedules vary with the season. The campground and some sites are closed during the winter. The current entry fee to visit Mesa Verde National Park is $15-25 (fee is good for 7 days); all federal lands passes are accepted.

(The cowboys’ discovery of Cliff Palace) was the beginning of the mystery which is still a mystery. Who were these people, where did they go, and why?