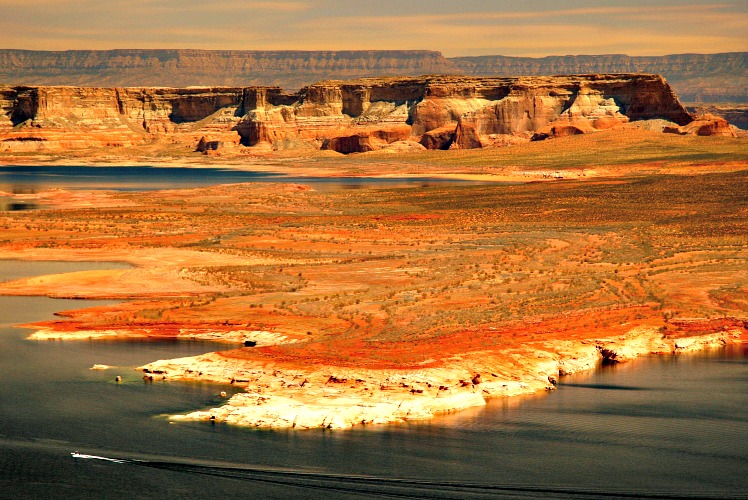 With the summer days already getting shorter, families across the country are packing up their RVs and heading outdoors to experience the country via a road trip. From the massive sequoias of California to the caverns of New Mexico to the charming streets of Charleston, South Carolina, the U.S. offers countless stops that can make a road trip unforgettable.

Big Bend National Park, a vast, isolated national park along the Texas-Mexico border, is home to mountains, deserts, canyons, and hundreds of bird species. Visitors can see dramatic canyons, historic sites, and wildlife in one of the less-visited national parks in the U.S. Its isolation makes it ideal for stargazing and visitors can hike through deserts and along rivers in over 150 miles of trails.

A must-see destination in the American heartland, the reservoir of Lake Powell lies on the Colorado River, mostly in Utah but with some of it stretching into Arizona. Two million people come here every year to bask in endless sunshine, warm water, and spectacular scenery and to marvel at the surrounding Mars-like terrain.

Aside from being home to the world’s largest tree (by volume) and protecting vast areas of towering redwoods, a big part of Sequoia’s appeal is that it isn’t all that crowded. Take a stroll under the big trees in the Giant Forest, view wildlife in Crescent Meadows, or climb to the top of Moro Rock

The horseshoe-shaped, russet rock hoodoo formations of Bryce Canyon National Park are a true sight to behold. This is one of the world’s highest concentrations of hoodoos and their colors alternate between shades of purple, red, orange, and white. One of the most rewarding ways to admire these geological wonders is to hike to Sunrise Point and its panoramic lookouts where you can witness the magic of the sunlight hitting the rocks.

The red rock majesty of Utah is on triumphant display on State Route 12 winding between Capitol Reef and Bryce Canyon national parks. The 124-mile strip has funky small towns and very few entry points, so it takes a map and determination to witness the steep sandstone canyons and bluffs of purple sage and to tackle the narrow cliff-hanging ridgeline road called The Hogback.

Just two trails (and an elevator) exist for visitors to explore Carlsbad Caverns on their own. The Big Room Trail, the largest single chamber by volume in North America can be accessed via a 1.25-mile trail or a .6-mile shortcut. The relatively flat terrain weaves through a series of curious hanging stalactites and passes through park gems like the Hall of Giants, Bottomless Pit, and Crystal Spring Dome. The park also offers a few ranger-guided cave tours and star walks.

It’s no secret that Charleston is one of the most beautiful cities in the world. Whether you’re looking to soak up the sun on a family-friendly beach or explore the history of this Southern gem, a Charleston getaway is one you’ll never forget. Walk alongside Charleston harbor on the Battery and in White Point Gardens, visit the Holy City’s famed St. Philips graveyard, or experience what life was like in the Lowcountry hundreds of years ago at Charles Towne Landing State Historic Site.

Drive four hours east of the Grand Canyon (and its 6,254,238 annual visitors) and explore the considerably quieter (just 825,660 visitors) Canyon de Chelly. As a bonus, park access is free and so are the ranger-led tours that introduce you to the canyon’s remarkable history and the indigenous tribes that have called it home for centuries.

Enjoy breathtaking vistas of the Blue Mountains from 75 overlooks along the 105-mile scenic Skyline Drive, fish in one of 70 mountain streams, or take your pick of over 500 miles of trails, including 101 miles of the Appalachian Trail. Park highlights include Rapidan Camp, President Hoover’s summer White House, Hawksbill Mountain (the highest point in the park), and Dark Hollow Falls, a popular walk to a 70-foot waterfall.

Cumberland Island National Seashore includes one of the largest undeveloped barrier islands in the world. The park is home to a herd of feral, free-ranging horses. Most visitors come to Cumberland for the natural glories, serenity, and fascinating history.

The attraction of recreational vehicle travel is to see the country, visit new places, meet interesting people, and experience the freedom of the open road.