Newspaper Rock features a rock panel carved with one of the largest, best preserved, and easily accessible collections of petroglyphs in the Southwest 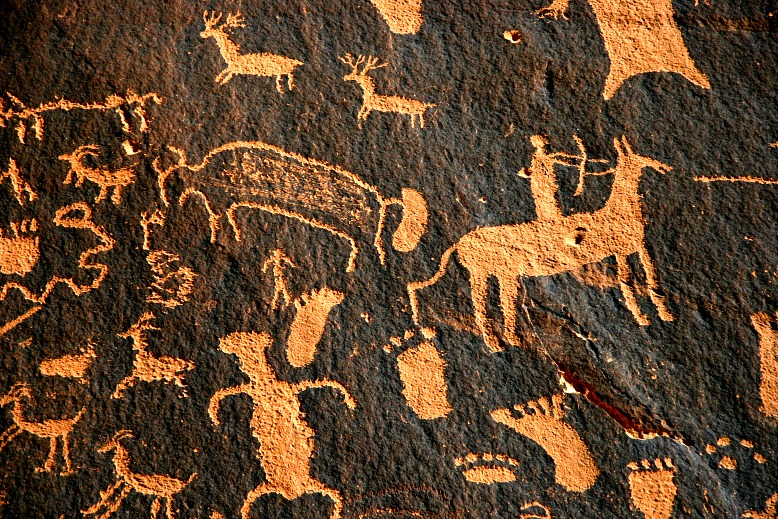 Extra, extra, read all about it! The reviews are in: You can see all the news you can’t actually read at one of the West’s most famous rock art sites. And there’s no fake news here!

Native American Indians have been engraving and drawing on Newspaper Rock for more than 2,000 years. Their markings in these ruins tell the stories, hunting patterns, crop cycles, and mythologies of their lives. But what exactly these petroglyphs are communicating, we’ll never know for there is no actual translation available at this remarkable Utah attraction.
Newspaper Rock is located 15 miles west of U.S. 191 along the 41-mile Indian Creek Corridor Scenic Byway (S.R. 211) in Bears Ears National Monument, now part of the 71,896-acre Indian Creek unit designated December 4, 2017 by U.S. President Donald Trump.

A petroglyph panel of such renown, Newspaper Rock was listed on the National Register of Historic Places long before either Bears Ears National Monument or Indian Creek added prominence to the remote corner of Utah. The landmark is covered with images of animals, people, ancient symbols, and depictions of the natural world etched into the rock by peoples from the Fremont, Ute, and Ancient Puebloan (Anasazi) Native American tribes. It’s surmised that the perennial natural spring attracted ancients to this distinctive area of Utah.

As one of the largest collections of petroglyphs in the country, Utah’s Newspaper Rock State Historic Monument is like a living museum. However, thankfully, you don’t have to peer at the pristine rock art through glass at this site.

The rock is called Tse’ Hane in Navajo, or “rock that tells a story.” There are over 650 rock art designs here that feature a mixture of forms, including pictures resembling humans, animals, tools, and more esoteric, abstract things. The 200-square-foot rock site is a part of the cliffs along the upper end of Indian Creek Canyon.

Indian Creek Canyon is a popular Utah destination for rock climbers who flock to the Wingate sandstone for its pristine cracks, which are scaled with traditional climbing aids. However,  nature lovers will still get much out of the scenic drive; better still, the road leads to The Needles District of Canyonlands National Park, which offers a number of great hiking trails ranging from family-friendly walks through historically significant places to overnight backpacking trips.

Standing at the base of the 200-square-foot rock and trying to decipher what the ancients were trying to communicate, craning your neck to count all of the artwork, sketching and replicating some of the petroglyphs in your own notepad, losing count when you try to see who can count the most antelope, driving the awe-inspiring byway and looking at all of the massive, perfectly-red Wingate sandstone cliffs.

Just across the highway from the petroglyphs there is a picnic area and campground, which is free and is first-come, first-serve. The area is open year-round, and the best times to visit are March through late-May and September through October.

No fees or permits are required to visit Newspaper Rock or to drive the Indian Creek Scenic Byway. There are fees to enter Canyonlands National Park.