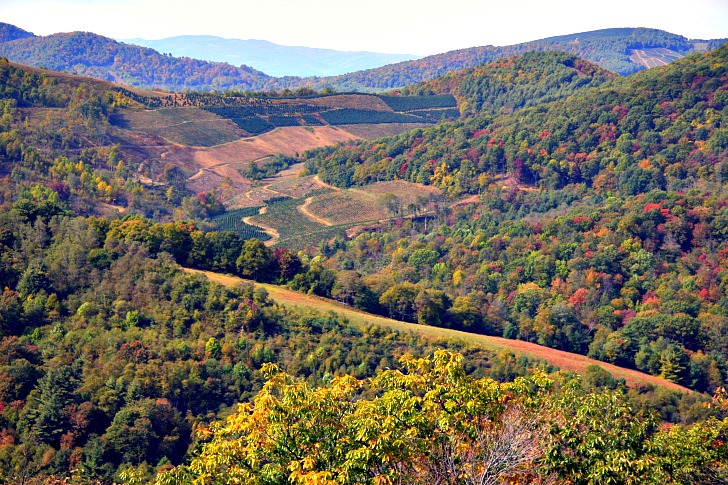 These drives aren’t just a road to something beautiful, they are jaw-dropping on their own.

“To everyone in this country, the car represents freedom, mobility, and the control you feel over your destiny/destination,” said Callie Khouri, Oscar-winning screenwriter of Thelma & Louise.

From the dramatic California coast to history-lined thoroughfares of New England, there are countless scenic drives across the country—and some stellar standouts. We’ve picked the routes with heart-stopping vistas. For example, the winding Blue Ridge Parkway, now over 75 years old, winds its way past limestone caverns, clear mountain springs, and Appalachian majesty.

So round up the family, prep the RV, and hit the road. In Khouri’s words—go see what America tastes like.

The nearly 500 miles of blacktop twisting through the Great Smoky Mountains and Shenandoah national parks was built for travelers seeking Appalachian overlooks. It’s a panoramic drive for all seasons, with undulating slopes of color in autumn, a bounty of forest canopy in summer, and hot-cider ski resorts in winter.

Stop: In the mines of the mineral-rich Appalachian Mountains, visitors can pan for emeralds, amethyst, rubies, topaz, and even gold at Emerald Village (Milepost 334).

The red rock majesty of Utah is on triumphant display on State Route 12 winding between Capitol Reef and Bryce Canyon national parks. The 124-mile strip has funky small towns and very few entry points, so it takes a map and determination to witness the steep sandstone canyons and bluffs of purple sage, and to tackle the narrow cliff-hanging ridgeline road called The Hogback.

What seems like a long bike ride is actually one of the most picturesque portions of pavement in the country and it’s surrounded by fun things to do. Officially known as US Route 16A the Iron Mountain Road twists and turns through a portion of Custer State Park in the Black Hills of South Dakota.

Stop: The Mount Rushmore National Memorial is the crown-jewel of an Iron Mountain Road trip.

The 10-mile coastal route packs in historic mansions and spectacular views over Narragansett Bay. The Gilded Age “cottages” of Ocean Drive compete with maritime scenery for jaw-dropping splendor, including opulent homes built for titans of industry, the Vanderbilts, Astors, and Morgans.

Travel the Cherohala Skyway and enjoy panoramic vistas as you wind through the Southern Appalachian high country. It winds up and over 5,400 foot mountains for 18 miles in North Carolina and descend another 23 miles into the deeply forested back country of Tennessee. The road crosses through the Cherokee and Nantahala National Forests thus the name “Chero…hala”.Peak colors typically occur during the last two weeks in October.

Stop: The Cherohala Skyway Visitor Center in Tellico Plains is a “must stop” before starting up the Skyway. Stop by for free maps, Skyway driving conditions and local area souvenirs and gifts.

The California Gold Rush expended 125 million troy ounces of gold, worth more than $50 billion by today’s standards. It is estimated that more than 80 percent of the gold in the Mother Lode is still in the ground. Many of the historic and picturesque towns that developed in the area still exist, linked by California Highway 49, the Gold Rush Trail.

Stop: Hangtown, which has since been renamed Placerville, is where the famous “Hangtown Fry” was invented and is still featured on many local menus. An omelet with cheese, bacon, onions, and oysters, the first Hangtown Fry was whipped up during the height of the Gold Rush when a suddenly successful miner demanded, “the most expensive food you’ve got!”

Nothing says summer travel like a road trip, whether you’re venturing to a nearby favorite spot or setting out in search of distant adventures.