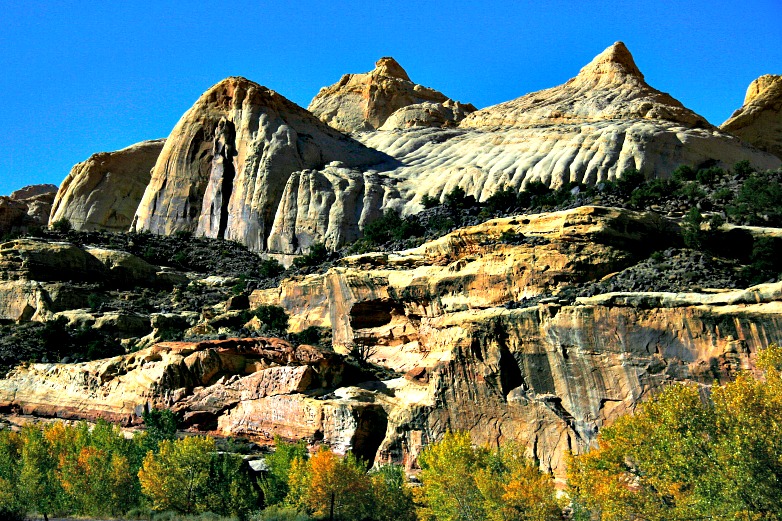 Even considering Utah’s many impressive national parks it is difficult to rival Capitol Reef’s sense of expansiveness, of broad, sweeping vistas, of a tortured, twisted, seemingly endless landscape or of limitless sky and desert rock.

While Bryce and Zion are like enveloped fantasy lands of colored stone and soaring cliffs, the less-visited Capitol Reef is almost like a planet unto itself. Here you get a real feel for what the earth might have been like millions of years before life appeared, when nothing existed but earth and sky.

Capitol Reef National Park is an expressive world of spectacular colored cliffs, hidden arches, massive domes, and deep canyons. It’s a place that includes the finest elements of Bryce and Zion in a less crowded park that offers a more relaxing experience than either of those more-traveled Utah attractions.

The park preserves the 100-mile Waterpocket Fold, a mammoth buckling of the earth’s surface with colorful canyons, tortured desert, and numerous bridges and arches (“waterpocket” refers to the potholes that dot the sandstone and fill with rainwater). The park’s name combines the popular term for an uplifted landmass, “reef,” with a visual resemblance of the park’s many white Navajo Sandstone domes to that of the nation’s Capitol Building.

In some parks you really need to get away from the road to find the best scenery, but in Capitol Reef there is a plentitude of beauty that can be accessed by vehicle. Views in Capitol Reef are considerably more “open” than those in Zion, which is rather confined by the narrow canyons.

A logical place to start is the Capitol Reef Scenic Drive, a 25-mile round trip paved road that is lined with pullouts that allow you to stop and take it all in. One highly recommended stop is the Panorama Point/ Goosenecks view area on the park’s west end.

From this scenic drive several short side drives on well-maintained dirt/gravel roads can be negotiated in virtually any vehicle. The first of these, Grand Wash, is sort of like taking a Disneyland ride in your own car. The hike through the Narrows, from the trailhead at the end of the Grand Wash drive is recommended.

You can take the entire 2.5-mile walk which ends at Highway 24, or just go about 0.25 mile to a cutback trail (somewhat steep) on the left to visit Cassidy Arch, where Butch is said to have hung out.

You should definitely drive out to the end of the unpaved but well-maintained 2.2-mile Capitol Gorge spur, a few miles farther along the scenic drive. It is hard to imagine a more unusual driving experience: The gorge ends in a narrow channel carved between sheer cliffs.

After a visit to Capitol Reef’s rocky wilderness, the green groves and fruit orchards around the intersection of Highway 24 and the park scenic drive are a cool and welcome sight. Just after the turn of the century, the Mormon community of Fruita, nestled in the shaded canyon formed by the Fremont River, was a lively, vibrant town of nearly 50. Though most of Fruita’s residents gradually moved away after Capitol Reef’s establishment as a national monument, the fields and orchards remained.

Visitors may even pick small quantities of fruit: cherries in June, apricots in July, pears in August, and apples in September. Look for U-Pick signs and be prepared to pay a small donation for any fruit you take with you. The money, collected on an honor system, goes to maintain the orchards—a very worthy cause.

While in the Fruita area check out other historic attractions including the Fruita Schoolhouse, old Blacksmith Shop, the Fremont petroglyphs, and the Gifford Homestead, which in addition to offering a snapshot of pioneer life, bakes the harvest of the season into incredible pies. The one-room schoolhouse built in 1896 remained in use until 1941.

Past the old schoolhouse the petroglyph trail continues for a mile to to Hickman Natural Bridge. This is perhaps one of the best park walks in all of Utah with scenic views and glimpses of Fremont Culture ruins. In this lightly traveled part of the world you will probably have this highly recommended walk mostly to yourself.