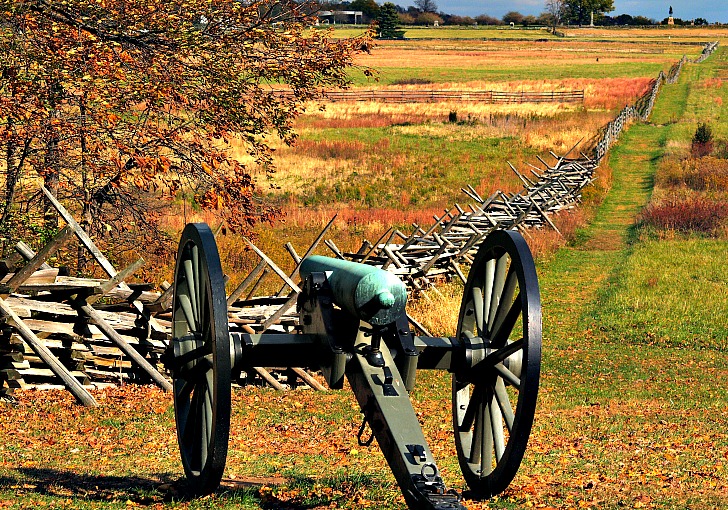 The Battle of Gettysburg was a major turning point in the Civil War, the Union victory that ended General Robert E. Lee’s second and most ambitious invasion of the North.

Often referred to as the “High Water Mark of the Rebellion”, Gettysburg was the Civil War’s largest battle. It was also the bloodiest single battle of the war, resulting in over 51,000 soldiers killed, wounded, captured, or missing.

To properly bury the Union soldiers who died at Gettysburg, a “Soldiers Cemetery” was established on the battleground near the center of the Union line. It was here during the dedication ceremony on November 19, 1863, that President Abraham Lincoln spoke of “these honored dead…” and renewed the Union cause to reunite the war-torn nation with his most famous speech, the “Gettysburg Address”.

The cemetery contains more than 7,000 interments including over 3,500 from the Civil War.

The National Park Service Museum and Visitor Center is the place to begin your visit to Gettysburg National Military Park. Here visitors will find information on how to visit the park and what to see around Gettysburg.

The center also hosts the film, “A New Birth of Freedom”, narrated by award winning actor Morgan Freeman and the restored Gettysburg Cyclorama, which depicts the final fury of Gettysburg―”Pickett’s Charge”.

The Gettysburg National Military Park Museum and Visitor Center is owned and operated by the Gettysburg Foundation in cooperation with the National Park Service. Entry to the center is free. There is a fee for the film experience, cyclorama program, and access to the museum exhibit hall. The center hosts a massive book and gift store operated by Events Network as well as a “Soldier’s Rest” saloon that offers a full menu throughout the day.

Battlefield tours on your own, on a bus, or with a Licensed Battlefield Guide can be arranged at the Center.

The Soldier’s National Cemetery (Gettysburg National Cemetery), the final resting place of the Union soldiers who died at Gettysburg and where President Abraham Lincoln gave his famous address, is also located in the park and is open from dawn to dusk throughout the year.

Fought over the first three days of July 1863, the Battle of Gettysburg was one of the most crucial battles of the Civil War. The fate of the nation literally hung in the balance that summer of 1863 when General Robert E. Lee, commanding the “Army of Northern Virginia”, led his army north into Maryland and Pennsylvania, bringing the war directly into northern territory.

The Union “Army of the Potomac”, commanded by Major General George Gordon Meade, met the Confederate invasion near the Pennsylvania crossroads town of Gettysburg, and what began as a chance encounter quickly turned into a desperate, ferocious battle. Despite initial Confederate successes, the battle turned against Lee on July 3rd, and with few options remaining, he ordered his army to return to Virginia.

The Union victory at the Battle of Gettysburg resulted not only in Lee’s retreat to Virginia, but an end to the hopes of the Confederate States of America for independence.

Four score and seven years ago our fathers brought forth on this continent, a new nation, conceived in Liberty, and dedicated to the proposition that all men are created equal.

Now we are engaged in a great civil war, testing whether that nation, or any nation so conceived and so dedicated, can long endure. We are met on a great battlefield of that war.

It is for us to be here dedicated to the great task remaining before us, that from these honored dead we take increased devotion to that cause for which they gave the last full measure of devotion, that we here highly resolve that these dead shall not have died in vain―that this nation, under God, shall have a new birth of freedom and that government of the people, by the people, for the people, shall not perish from the earth.