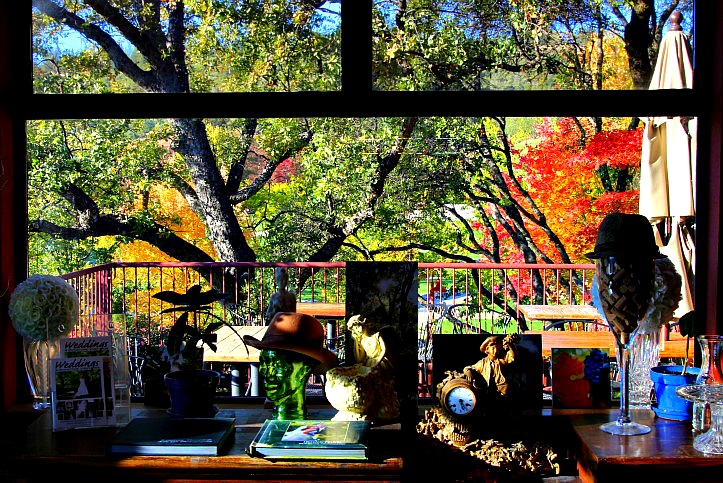 The roots of old zinfandel grapevines run deep in the Gold Country with winemaking here dating back to the Gold Rush days of the 1850s.

Now, an explosion of wineries, wine tours, tasting rooms, and restaurants specializing in wine country cuisine has added a jolt of grape-fueled energy to the Sierra foothills where more than 100 wineries now produce a wide range of varietals, most notably zinfandel, but also an intriguing variety of other varietals.

Gold country has always been audacious and rip-roaring. No surprise—its wines are too. Most wines need time to rest, relax, and mature. And really, don’t we all?

To sample the new boom, we headed to tiny Plymouth for surprisingly trendy tasting rooms and sleek restaurants like Taste—a magnet for savvy foodies. Here we used Far Horizon 49er Village RV Resort as our home base while we explored the historic and picturesque towns and unique wineries in Amador and El Dorado counties.

Amador is old vine country; nearly 600 acres of the county’s vines are at least 60 years old, while several vineyards date to the 19th century. The most common adjectives for the area’s potent reds are big and robust—zinfandels, syrahs, and barberas that howl at the moon. Roughly 40 wineries in Amador County alone offer sips.

The region’s Shenandoah Valley, in the northern part of the county near the small town of Plymouth, is a great place to experience the influx of new mixed with the old. Stylistically, zinfandels from the Shenandoah Valley tend to be fuller, riper, and earthier with a characteristic dusty, dark berry fruit character, hints of cedar, anise and clove spice, and scents of raisin and chocolate.

Amador may have developed its reputation around zinfandel, but Shenandoah Valley winemakers have branched out over the past 20 years and now produce wines from grape varietals originating in France, Italy, Portugal, and Spain, offering red, white, and rosé wines as well as excellent ports and dessert wines.

Wineries within five or 10 minutes of Plymouth include Bella Piazza Winery, Terra d’Oro, Borjón Winery, Helwig Winery, and Cooper Vineyards, one of California’s most charming family wineries and a personal favorite.

El Dorado sits at the north end of California’s famed Mother Lode, the 120-mile gold vein discovered in the late 1840s which became the site of the Gold Rush. Today, the region is better known for its visitor attractions, agriculture, and old-vine zinfandel. Winemaking at a higher level, the Sierra foothills range from 1,200 to 3,500 feet and hundreds of microclimates perfect for nearly 50 grape varieties. And their artisan winemakers have a passion for experimenting and for this place. That’s what sets El Dorado apart.

El Dorado County’s Grace Patriot Wines, a family-run business, provides not only award-winning wine, but history to the area. Their scenic property lies a few miles east of Placerville in an area known as Apple Hill for the abundant apple orchards scattered across the landscape.

Mark Twain gave Calaveras County its claim to fame with his bestselling story “The Jumping Frog of Calaveras County.” Nestled in the foothills of the Sierra Nevada Mountains, this famous Gold Rush location still maintains its 19th-century charm, including Murphy’s Historic Hotel, in operation since 1856. Twain was just one of its famous guests.

There are over 30 wineries in Calaveras and more than 20 of them have tasting rooms within walking distance from one another along Murphys’ Historic Main Street. That means you can literally do wine country on foot.  But don’t miss the chance to hop in your car to hit up a few of the operational wineries that are mere minutes from downtown and offer the authentic winery experience complete with wine caves, and stunning views.

Beautiful scenery pairs well with a glass of wine. Famous attractions like Yosemite National Park and Lake Tahoe offer breathtaking examples of the state’s natural abundance, while just a short drive away.