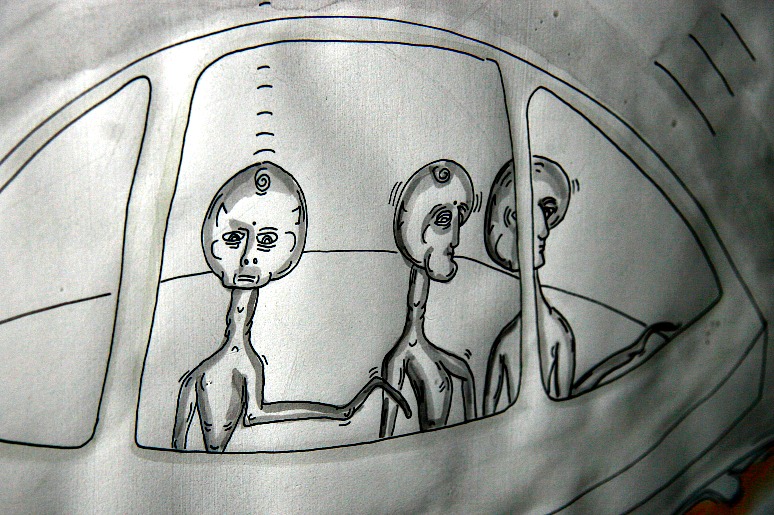 Seventy two years ago, a rancher named W.W. Mack Brazel checked his sheep after a thunderstorm and found debris made of a strange metal scattered in many directions. He noticed a shallow trench cut into the desert floor.

As the story goes, Mac Brazel drove his rusty pickup down to the county seat of Roswell, New Mexico to inform authorities that something had crashed and scattered metallic debris across his ranch land.

Figuring it must have come from the nearby Army airfield, officers accompanied him back to the ranch, and what they witnessed in the desert has, in the decades since, mushroomed to become the most widely publicized event in UFO lore.

There had been 16 reported unidentified flying object sightings reported that year during the several months preceding what would be known as the Roswell Incident.

The Air Force issued a press release stating that a UFO had been found. That statement was quickly rescinded and another was issued indicating that the debris came from a top-secret weather balloon test.

Adding to the mystery, the Air Force ordered sealed coffins from a Roswell undertaker, fueling speculation that aliens had been recovered.

Roswell Army Air Field became Walker Air Force Base two years after the flying saucer flap. In 1967, the military vacated altogether, leaving what would eventually be developed into an industrial air center.

It’s also home of the notorious Hangar 84 where, legend has it, the Roswell wreckage and bodies were stored before shipment to their new digs at the even more notorious Hanger 18 at Wright-Patterson Air Force Base in Ohio.

Roswell has wisely embraced its extraterrestrial past. Once-empty storefronts in downtown Roswell overflow with E.T. and UFO everything. Cornerstone of it all is an old movie house converted into the world’s foremost center for UFO information and study.

Roswell, however, boasts much more, historically.

The cattle industry brought settlement to the Pecos Valley when John Chisum founded the Jinglebob Ranch in 1878. Growth was slow at first.

Added to the usual frontier lawlessness, hostile Comanches east of the Pecos and Apaches to the west was the violence erupting from the Lincoln County War.

Roswell has been famous in agricultural circles for its high-quality alfalfa, in scientific circles for the rocket experimentation of Robert H. Goddard between 1930 and 1941, and in academic circles for New Mexico Military Institute.

Roswell’s food processing industries include the nation’s largest producer of mozzarella cheese, and a lollipop factory.

According to Will Rogers, Roswell was the prettiest little town in the west. Money magazine has called it one of the 10 most peaceful places to retire. Hugh Bayless, in his book, The Best Towns in America, listed Roswell as one of the 50 most desirable communities in which to live.

Roswell now is becoming known for its Downtown Historic District, which was created by the Historic Society for Southeast New Mexico. It was named to the State and National Registers of Historic Places in 1985, along with the campus of New Mexico Military Institute, several outlying ranches, and Chihuahuita, probably the oldest settlement in the Roswell area.

So—what is the truth? Well, visit Roswell and judge for yourself.