Sample the bounty of the Okanagan Valley 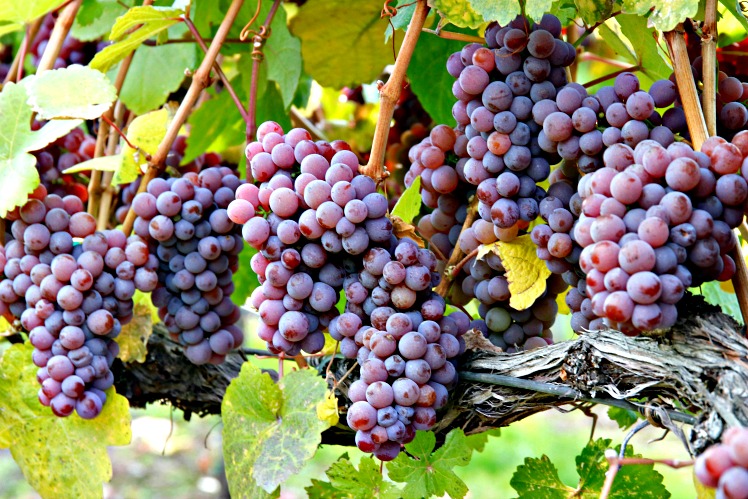 There is magic in the air as August turns into September—a ripening of the season as fruit trees grow heavy with red apples and pale yellow pears; leaves turn golden to reveal a harvest of pumpkins, squash, tomatoes, and cucumbers in the field; and grape vines hang heavy with clusters of newly turned red and purple/black grapes.

The Okanagan Valley is the heart of British Columbia’s grape growing region and boasts more than 130 licensed wineries. An ever-changing panorama, the valley stretches over 150 miles, across distinct sub-regions, each with different soil and climate conditions suited to a range of varietals.

Two towns are standouts for their concentration of vineyards and wineries: Oliver (named for long-ago British Columbia Premier John Oliver) and Osoyoos (which shares a name with one of seven Okanagan tribes (called “bands” in Canada); pronounce it “oo-SUE-yooze”. Together the towns boast 39 wineries that extend from the lush valley into the semi-arid mountains that surround the area.

Add to this the Okanagan’s natural beauty (it’s a hallowed summer-vacation spot for Western Canadians), its wide range of non-wine-related things for the whole family to do—from riding the century-old Kettle Valley steam train and swimming in those pristine lakes to biking and hiking, and its lush orchards selling juicy peaches and cherries on the roadside—and you’ve got a wine-country experience like no other.

On a hillside overlooking vineyards, sagebrush, and the old gold mining creek that is its namesake, Tinhorn Creek Vineyards has been owned and operated by the Shaunessy and Oldfield families since1993. The winery is located south of Oliver at the junction of Highway 97 and Road 7 in the famed Golden Mile wine-growing district.

Hester Creek Estate Winery is situated within some of British Columbia’s oldest vineyards in the bountiful Golden Mile region. The 95-acre, Mediterranean-influenced grounds, winery, and guest Villa evoke an old-world sense of tranquility.

Hester Creek Estate winery boasted a green and shaded patio perfect for a picnic and a bottle of wine. The tasting room was a work of art in its own right, as were the wide variety of wines we sampled. The staff were friendly and accommodating

Resembling a cross between a castle and a pueblo, Burrowing Owl winery rises from the sandy southern end of the Okanagan on some of the most coveted grape-growing land in the valley. The venue is gorgeous; set among rolling silver-brown hills and green vines.

The winery is named for the Burrowing Owl, and the winery owners have been working to help preserve and repopulate this endangered species.

The Osoyoos, one of seven Okanagan tribes (called “bands” in Canada), have lived in the southern part of the valley for centuries. They own 24 percent of the grape-growing land in the valley and established their own vineyards in 1968. Nk’Mip (pronounce it “IN-ka-meep”) Cellars is the first native-owned winery in North America. It’s part of a whole constellation of buildings make up the tribe’s new resort, including a luxury hotel in glowing ochre and cinnamon, with a spa featuring indigenous and desert-based treatments, and the Nk’Mip Desert Cultural Centre, a beautiful building made of rammed earth, with a roof planted with local vegetation.

Taste your way through the Okanagan. Maybe I’ll see you there.