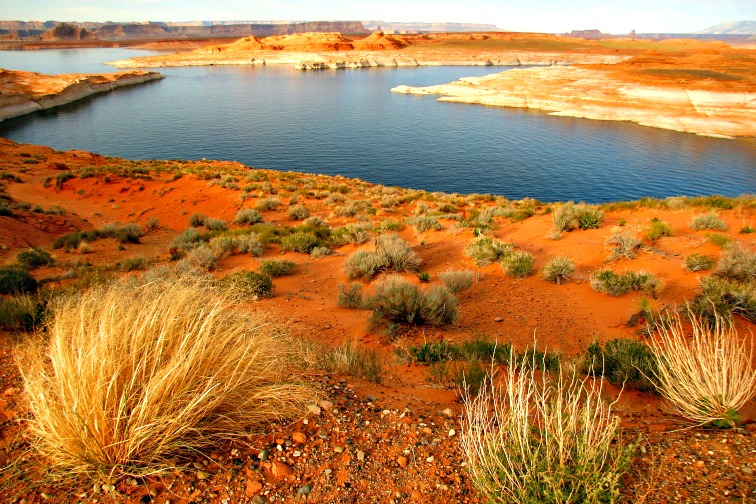 One hundred fifty years ago in May 1869, a one-armed Civil War veteran set off with nine mountain men on a scientific expedition to map one of the last blank spaces left on the US map: The Green and Colorado Rivers through the Grand Canyon.

Certainly, some of the scenery and route has changed since the 1869 trip (which Powell repeated in 1871): dams were built, altering the rivers and flooding the canyons he explored. But much of the route remains protected, ensuring a rugged and wild adventure for those following in Powell’s wake.

Here are key segments of his trip through Canyonlands National Park, Lake Powell, and Grand Canyon National Park—and what they offer today.

“God help the poor wretch that is caught in the canon during highwater.”
— Jack Sumner, member of the Powell expedition

Cataract Canyon sits 3 miles below the confluence of the Green and Colorado rivers— and it bedeviled the Powell crew. The rapids appeared so dangerous, the crew spent days portaging their boats past cataract after cataract.

Today, a large sign warns paddlers of “hazardous rapids” as they enter Cataract Canyon and the free-flowing Colorado River. Some 400 miles away from the dam that impounds the Green River and 180 miles from another on the Colorado, this segment of the river provides the most powerful white water in the country. It boasts 30 big rapids including The Big Drop, where the river drops over 30 feet in less than a mile.

Boaters and paddlers can obtain permits through Canyonlands National Park which manages the canyon. Cataract itself is 14 miles, but river trips are usually about 48 miles, starting upstream on the Green or Colorado and ending on Lake Powell.

For those who don’t want to travel via river, there’s still plenty to do in the surrounding national park, from taking in breathtaking vistas in the park’s Island in the Sky district on its paved scenic drive, to hiking or four-wheeling in The Needles district, or serious backcountry trekking in the remote section called The Maze.

Powell described Glen Canyon as a “land of beauty and glory” and named it for its many glens and alcoves near the river. About 100 years later, the canyon was flooded by the Glen Canyon Dam on the Colorado River forming a lake named for the one-armed explorer.

“The limestone of this canyon is often polished, and makes a beautiful marble. Sometimes the rocks are of many colors—white, gray, pink and purple, with saffron hints.”
— John Wesley Powell

About 900 hundred miles and three months after they launched their boats, Powell and crew reached what he later named the Grand Canyon. Theirs was the first recorded passage of white men through the entirety of what Powell called “the great unknown,” though Grand Canyon has been inhabited for 12,000 years.

Today, the canyon is one of the Seven Wonders of the World. It contains 277 miles of the Colorado River and is up to 18 miles wide. Most of the 5 million annual visitors come for the majestic views of its fantastic shapes and colors—red, buff, green, pink, slate, and violet.

Those who venture below the rim can hike and camp in the backcountry (with permits), take a mule ride down to the bottom, or raft the mighty river that carved the canyon 5 to 6 million years ago. Whitewater trips last from 3 days to 3 weeks.

Success is a journey, not a destination. The doing is often more important than the outcome.