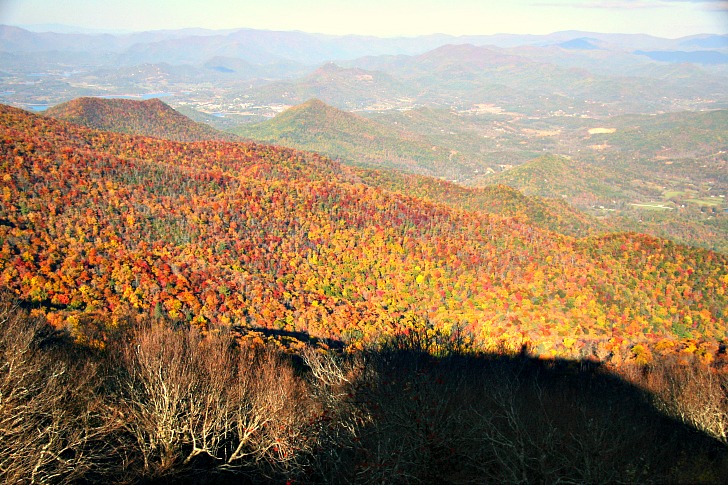 There is a ripening of the season as fruit trees grow heavy with red apples; leaves turn golden to reveal a harvest of pumpkins, squash, tomatoes, and peppers in the field―and grape vines hang heavy with clusters of newly turned black and golden grapes.

Summer may be ending, but these four destinations are still basking in sunny bliss.

Although the ways fall color happens are scientific, describing fall color is not, and predicting it accurately—even for an arborist—is out of the question.

Fall foliage won’t wait and neither should you.

As Shenandoah is a 105-mile-long park, with elevations ranging from less than 1,000 feet to just over 4,050 feet, there is no single “peak” of color; rather there are lots of little peaks, bursts of color happening at different times in different places. The best park rangers can do, year after year, toward fall color prognostication for visitors trying to plan their autumn jaunts to Shenandoah, is to say this: the time most likely to be most colorful in this park is the middle of October. This is also Shenandoah’s busiest time, so plan accordingly.

Fishlake National Forest boasts some beautiful scenic drives as well as mountain biking, hiking opportunities, and snowmobiling during the winter months. Its three mountain ranges and desert canyons are primarily located to the east of Interstate 15 and to the north and south of Interstate 70.

Fish Lake and the surrounding acres of recreational bliss are known for their beautiful aspen forests and rainbow trout. The high-alpine lake sits at about 8,800 feet above sea level and is surrounded by quaking aspens, which are brilliantly yellow and amber during the fall.

It makes for a picturesque drive along Fishlake Scenic Byway (Highway 25) as you head from Highway 24 to the north edge of the lake. The route in total is 30 miles and can be driven in approximately two hours.

The Blue Ridge Parkway is so long and goes through so many elevation changes that it doesn’t have just one foliage season—it has many. Almost any week in the fall might see somewhere along the Blue Ridge in peak color.

The high elevation of the region supports some of the same species that grow up north, but look also for brilliantly yellow hickory and tulip poplar, especially in the southern end of the 469-mile-long route. For those who want to get off the paved road, there is plenty of camping and hiking.

At the state’s highest park, Black Rock Mountain, you can spy into Tennessee, North Carolina, South Carolina, and Georgia on a clear day. Visit Tallulah Gorge during the first three weekends of November, when Georgia Power performs its bi-annual dam release, and watch from the canyon’s rim as kayakers tackle a swollen river surrounded by fiery color.

If Thanksgiving approaches and you’ve procrastinated on leaf-ogling, ignore the Christmas commercials and bring the family for one last autumnal gasp. In state parks to the east, west, and south of Atlanta, especially F.D. Roosevelt, Sweetwater Creek, and Hard Labor Creek, fall arrives with equal splendor–just a few weeks later.

Summer ends, and autumn comes, and he who would have it otherwise would have high tide always and a full moon every night.