Located in the Horse Capital of the World, Keeneland is an internationally renowned racecourse and the Thoroughbred industry’s leading auction house 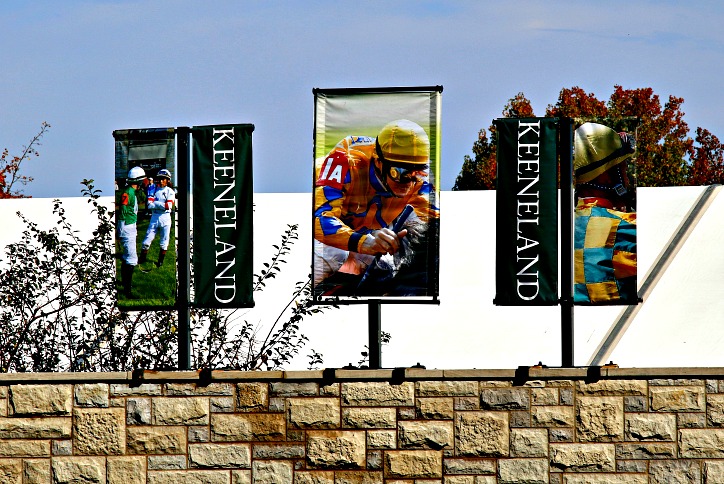 Kentucky is the undisputed mecca of the Thoroughbred industry in the U.S., both for breeding and racing.

Each year since 1875 this truth has been reaffirmed on the first Saturday in May, when sport’s brightest spotlight turns toward Churchill Downs, home of the Kentucky Derby. Its reputation as “The Most Exciting Two Minutes In Sports” is well-deserved. The same goes for the race’s record attendance numbers which eclipse both the Preakness and the Belmont Stakes.

But those who follow the sport beyond the Julep-fueled weekend know that much of the prestigious race’s success is owed to another place a mere 80 miles east.

Located in the heart of Kentucky’s famed Bluegrass region, Keeneland plays an important role in both Thoroughbred racing and breeding. A fundamentally different kind of race track, Keeneland was purposefully conceived to serve as a lasting monument to the sport’s heritage and tradition.

From its inception in 1936, Keeneland’s founders, led by respected horsemen Hal Price Headley and Major Louis Beard, intended it to be a special place—one that symbolizes the best in Thoroughbred racing.

As the story goes, after the closing of the Kentucky Association Track in 1933 during the thick of the Great Depression, Lexington was suddenly trackless for the first time in a century. While much of the country wandered adrift in search of food, shelter, and work, a committee of 10 local industry veterans hatched a plan to create America’s first not-for-profit track, one that would serve the community and reinvest proceeds into improving the grounds and fattening race purses.

The decision to act during such a period of economic chaos proved fruitful for the group. Jack Keene, a colorful character and world-renowned Thoroughbred breeder and trainer who had kicked off his goal to build a private racing and training facility during the high of the roaring 20s before things went sour, was willing to part with his dream for a bargain. He had already constructed a foundation with potential in the form of a mile-and-a-furlong track and a stone castle and barn built from limestone mined in Kentucky, but work was still required to get the track up and running in 1936.

Keeneland’s role as a beacon for the sport soon expanded in 1939, thanks to the donation of over 2,300 volumes on the sport of horse racing by Lexington businessman William Arnold Hangar, who sowed the seed for the Keeneland library, which today contains nearly 200,000 books and approximately 250,000 photographs and stands as one of the world’s largest research and reference repositories on Thoroughbreds.

Though the track has received its fair share of updates and improvements over the decades, little has changed aesthetically. Keeneland was officially designated a national historic landmark in 1986, and if you’ve ever seen the 2003 movie, Seabiscuit, you’ve seen the pristine setting firsthand, as most of the racing scenes were filmed there.

In 2009 the Horseplayers Association of North America introduced a rating system of all of the country’s 65 Thoroughbred tracks, and ranked Keeneland at the very top.

Today, Keeneland continues to be guided by that original mission, taking a leadership role in the industry and preserve racing’s storied history.

Each April and October (October 4-26, in 2019), the nation’s best Thoroughbred owners, trainers, and jockeys converge at Keeneland to compete for some of North America’s richest purse money.

As the world’s leading Thoroughbred auction house, Keeneland has sold more champions and stakes winners than any other sales company, including 95 horses that won 103 races during the Breeders’ Cup World Championship winners and 21 Kentucky Derby winners.

Keeneland’s beautiful, park-like grounds are open to the public every day. Fans also are welcome to visit the famed Keeneland Library.

Fans and horsemen alike are welcome to enjoy its spectacular racing, attend one of its annual horse sales, or simply visit the grounds and celebrate Keeneland’s timeless beauty.

For guests interested in learning about the history of Keeneland and wanting an insider view of operations, guided walking tours are available. This outside walking tour takes guests through the Keeneland Paddock and Grandstand, grounds, and when available, to the Sales Pavilion.

The tour lasts for one hour and largely takes place outside—rain or shine. During the race meets in April and October, tours are available Tuesday, Wednesday, Thursday and Friday beginning at 8:30 a.m.

To be born in Kentucky is a heritage; to brag about it is a habit; to appreciate it is a virtue.