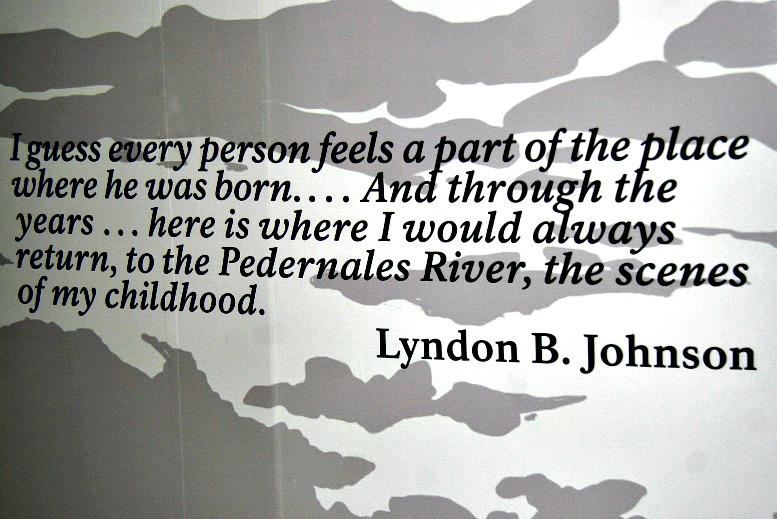 The LBJ Ranch is in the heart of the Hill Country on the banks of the Pedernales River.

Operated jointly by Texas Parks and Wildlife and the National Park service, the LBJ Ranch in Stonewall and the Boyhood Home and Johnston Settlement in Johnson City constitute a remarkable historic preservation.

In Johnson City you will find the National Park Visitor Center, Boyhood Home in which President Johnson spent his childhood, and the Johnson Settlement where the President’s grandparents first settled in the 1860s.

Lyndon B. Johnson National Historical Park tells the story of America’s 36th President beginning with his ancestors until his final resting place on his beloved LBJ Ranch. This entire “circle of life” gives the visitor a unique perspective into one of America’s most noteworthy citizens by providing the most complete picture of any American president.

Between the day he became president in November 1963, and the day he left the White House five years later, Lyndon Johnson returned to the Hill Country 74 times.

President Johnson had a deep attachment for place and heritage. The LBJ Ranch was where he was born, lived, died, and was buried. In 1972, the Johnsons donated their home and 690 acres for a national park. After the President’s death in 1973 at age 64, Lady Bird Johnson continued to live at the Ranch part time until her death in 2007.

Visitors are now able to tour the Ranch at their own pace in their private vehicle with the ability to stop at sites along the way such as the President’s birthplace, Johnson family cemetery, and the Johnson’s ranch house known as the Texas White House.

Obtain a free driving permit at the LBJ State Park and Historic Site Visitor Center in Stonewall. You will also receive a ranch map indicating the tour route. No Permits are given out after 4:00 p.m. A CD containing narrative audio for the tour is available for purchase in the bookstore and comes with a bonus DVD filled with videos and photos.

Then, just like LBJ did over 50 years ago in his white Lincoln Continental, drive through the main gate—but not as fast as the heavy-footed president liked to speed through himself.

After leaving the visitor center, continue to Sauer-Beckmann Living History Farm, where visitors can see how the Johnson family’s German-Texan neighbors lived.

After touring Sauer-Beckmann head for Ranch Road 1 along the Pedernales River. The right guardhouse on the left, once manned by uniformed Secret Service agents, marks the previous low-water crossing on the ranch.

As part of the self-guided Ranch Tour, you may stop at the Texas White House for a ranger-guided tour.

You’ll see Junction School, the one-room schoolhouse where Johnson learned to read; the reconstructed LBJ birthplace, and the Johnson family cemetery, here generations of the Johnson family are buried, including the president. You’ll also see the ranch house, known during the Johnson presidency as the “Texas White House”.

Once you arrive at the Texas White House, obtain a ticket for a house tour at the Airplane Hangar. House tour fee for ages 18 and older is $3.00.

The Texas White House was officially opened to the public on August 27, 2008. The entire ground floor is available for public tours. Rooms on the tour include the President’s Office, living room, dining room, and the Johnsons’ bedroom suites. The majority of rooms have been restored to their appearance during the presidential years (1963-1968) while the bedroom suites retain their appearance at the time of President and Mrs. Johnson’s deaths.

There’s something different about this country from any other part of the nation.

The climate is generally pleasant.

The sun is generally bright.

The air seems to be always clean.

And the water is pure.

The moons are a little fuller here.

The stars are a little brighter.

And I don’t how to describe the feelings other than I guess we all search at times for serenity.