Frankfort embodies the essence of everything that makes Kentucky special from natural charm and beauty to world-renowned bourbon. You could say that Frankfort is Kentucky Distilled. Frankfort is capitol halls and bourbon balls, rolling hills and rushing rivers, southern hospitality and historic buildings. Frankfort is beauty, big ideas, and bourbon. 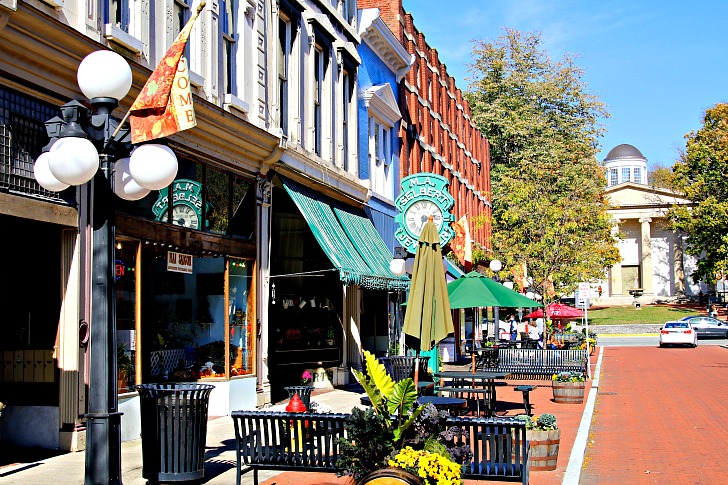 Kentucky’s capital city, Frankfort, is nestled between Louisville and Lexington along the banks of the Kentucky River. Built among picturesque hills on both sides of the river, Frankfort is in the midst of the famous Kentucky blue grass region. An historic city, Frankfort is a quintessential river community with small town charm, rich history, and typical Southern hospitality.

Stroll through the city to admire its fabulous architecture, especially the new and old capitol buildings, as well as the new and old governor mansions, which are open to the public.

Get a sense of local history at the Kentucky Historical Society’s Thomas D. Clark Center for Kentucky History. The museum presents the history of Kentucky in an interesting way that appeals to people of all ages.

The museum encompasses all aspects of the Commonwealth’s history from the time of Kentucky’s Early People, the Native Americans who hunted and farmed the land. Exhibits show what it was like to live on the Kentucky Frontier in the late seventeen hundreds and how the Great Depression and World War II influenced the state’s development and its people.

The city’s most prominent building is the State Capitol, about 400 feet long and 185 feet wide, built of granite and white limestone in the Italian Renaissance style, with 70 large Ionic columns, and a dome 205 feet above the terrace line, supported by 24 other columns. The Capitol was built in 1905-1907.

Kentucky’s Capitol is the fourth permanent building since statehood in 1792. It was built to replace the earlier 1830 capitol, still standing and available for tours in the historic downtown area.

Drinking it isn’t the only way to enjoy Kentucky bourbon. That’s why your tour of the Bluegrass should also include a trip to a candy shop. A Kentucky schoolteacher-turned-entrepreneur named Ruth Hanly Booe is credited with inventing bourbon candy. In 1919, she and another teacher, Rebecca Gooch, set up a candy business in the Prohibition-closed barroom of the Old Frankfort Hotel in Frankfort. The saloon-turned-candy shop was a big success. Ruth became sole owner in 1929.

The idea of making bourbon candy supposedly grew out of a chance remark during Frankfort’s sesquicentennial celebration in 1936, when a friend of Ruth’s pointed out that her mint candy and bourbon were the two best tastes in the world. Candy made using her secret recipe is still sold by Ruth Booe’s descendants at Rebecca Ruth Candies. You can tour the factory in historic downtown Frankfort at 116 East Second Street, a short distance from the state capitol.

Our informative tour included the story of Ruth Hanley Hooe, a museum of olden candy making equipment, a view of the candy production line, chocolate sniffs, and a bourbon ball sample. We took a bunch back with us to the motorhome for additional research.

In Kentucky, buffalo carved a pathway that was followed by America’s early pioneers. On the spot where the buffalo migration route crossed the Kentucky River, bourbon whiskey has been distilled for over 200 years. Buffalo Trace is the oldest continuously operating distillery in America. During Prohibition the distillery was permitted to remain operational making whiskey for “medicinal purposes”.

The distillery sprawls over 130 acres and is home to four centuries of architecture—all still fully operational.The Trace Tour began at the gift shop and included a warehouse and small bottling house where the distillery’s “single-barrel” bourbons—Blanton’s, Rock Hill Farms, Hancock’s Reserve, and Elmer T. Lee—are bottled and sealed by hand.

We walked the path of rolling bourbon barrels and were captivated by the alluring smell and atmosphere of bourbon aging inside the warehouses. Then we toured inside the Blanton’s Bottling Hall and saw signature bourbons being filled, sealed, labeled, and packaged—all by hand.

All tours are complimentary and include a tasting of Buffalo Trace Small Batch Bourbon, Eagle Rare 10 Year Old Bourbon, and Bourbon Cream Liquor.

I take with me Kentucky

embedded in my brain and heart,

in my flesh and bone and blood

Since I am Kentucky

and Kentucky is part of me.