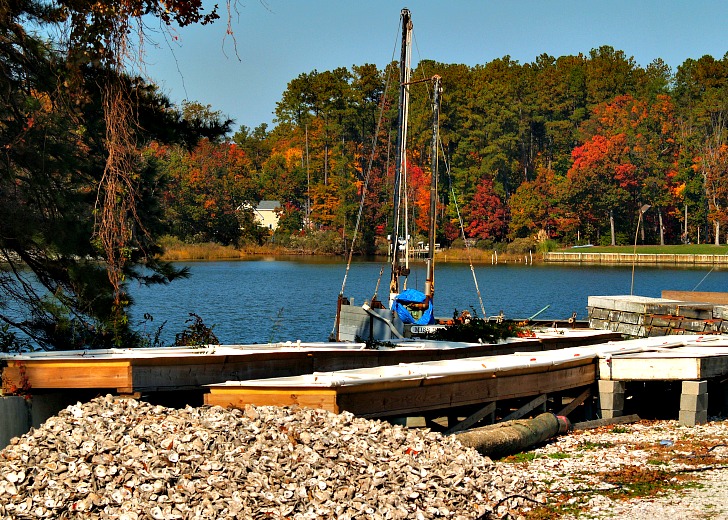 Framed by a protected cove on Urbanna Creek off Rappahannock River, the charming, historic Colonial port town of Urbanna is a Tidewater Virginia gem. With the open waters of Chesapeake Bay a few nautical miles away, Urbanna has more boats than people, according to locals.

Urbanna’s marinas, boutique shops, restaurants, galleries, and trove of 18th century historic buildings are all within an easy stroll through town, making for an enchanting visit and stay.

In 1649, Ralph Wormeley patented 3,200 acres on Rosegill Creek and the Rappahannock River. Landowners like Wormeley established plantations on Virginia’s navigable rivers, which they used as private ports, shipping tobacco directly to market without the inconvenience and expense of going through an official port of entry.

The 1680 Acts of Assembly at Jamestown changed all that by ordering local officials to create 20, 50-acre port towns in Virginia for 10,000 pounds of tobacco each, through which all trade would take place. A small part of Ralph Wormeley’s Rosegill that would, in 1705, be named Burgh of Urbanna, “City of Anne”, was one of them. The town was named in honor of England’s Queen Anne.

Rosegill Plantation consists of an impressive range of 18th century buildings: a washhouse, the dwelling house, the kitchen, and a storage house. The buildings standing today stylistically dated 1730-1750, a significant example of colonial plantation architecture. The extensive nature of the original complex makes Rosegill one of the oldest and most historic estates in America.

Seven buildings in town have been in continuous use since the colonial period. Four of them are on the National Register of Historic Places. All are located in Urbanna’s historic district.

The James Mills Scottish Factor Store (also known as the Old Tobacco Warehouse), which now serves as the town’s Museum and Visitors’ Center, is where planters exchanged tobacco for immediate cash and credit to purchase imported goods for sale. The building, itself, is a valuable piece of history, being the only Scottish Factor Store (circa 1765?) left standing in North America. The Mitchell Map, proudly displayed inside, is also a valuable rarity. This is the first edition, 3rd impression of the map called “The most important map in the U.S,” published and printed in 1755.

Next door is the Gressitt House, where Urbanna’s Harbormaster once lived. Across the street is Little Sandwich, believed to have been the port town’s Customs House.

Up the hill you’ll find Middlesex County’s original courthouse. It’s one of only 11 colonial courthouses still standing in Virginia today.

Other very special places can be found all around the Town. Cottage Row, a collection of quaint two story cottages built for supervisors of Urbanna Manufacturing Company are located on Taylor Avenue.

In the downtown area you will find Bristow’s Store, which first open its doors in 1876. Right down the street is Marshall’s Drug Store where you can sit at the old fashioned soda fountain, right out of the 1950s. Not far from the drug store is Haywood’s Variety Store. Built in 1875, merchants in this location have operated under the name Haywood’s Store since 1911.

As the international sailing vessels of the colonial tobacco trade yielded to Chesapeake Bay schooners, then steamboats, then the pleasure boats of today, one thing remained constant—Urbanna’s history and fortunes are one with the Bay.

During the Urbanna Cup Regatta in spring, captains of all ages and skills gather at the Town Marina to race wooden 8-foot Cocktail Class Runabouts.

When leaves change color and the air is crisp, it’s time for the Urbanna Oyster Festival—Virginia’s official Oyster Festival. The event draws over 75,000 visitors to town the first weekend in November (62nd Annual; November 1-2, 2019).

The family fun features oyster-inspired art, the centerpiece parade with beauty queens and their courts from around Virginia, the hotly contested Oyster Shucking Contest, a juried art show, a holiday house tour, concerts in the park, street parades, boat parades, fireworks, and a monthly farmer’s market.

He was a bold man who first ate an oyster.