The Monument Valley Trading Post is unlike any other you have visited. It offers a wide selection of contemporary and traditional American Indian Art, memorabilia of Monument Valley, and souvenirs of Hollywood movies shot on location. 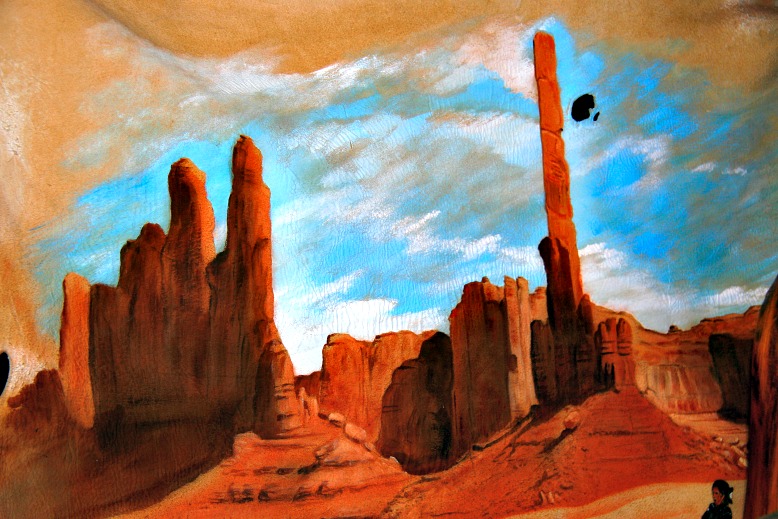 Magnificent Monument Valley is not a national or state park but, with 91,696 acres, it is a small part of the great Navajo Nation that covers much of northeastern Arizona and stretches into Utah and New Mexico.

Established in the early 1920s by Harry Goulding and his wife, Leone, nicknamed Mike. For half a century they maintained a warm relationship with the Navajo, trading with them and finding markets for their handmade items, helping lift them from poverty that plagued the reservation.

And then came the Depression, hitting the valley with a brutal vengeance. There was a terrible drought in 1934 and then another one in 1936. Income from the trading post diminished to virtually nothing.

Then, in 1938, with times desperate and conditions bleak, Harry Goulding took his one-in-a-million shot to Hollywood and what he managed to do reverberates to this day.

Armed with a photo album of 8-by-10 scenes of the valley made by famous photographer and close friend, Josef Muench, the Gouldings drove to Hollywood and sold movie director John Ford on the idea of using Monument Valley as a backdrop for Stagecoach, released in 1939. It won two Academy Awards and made John Wayne a star. The connection forged in that office on that day between Ford and Harry Goulding was the beginning of a new era in the American Western.

It’s said that when John Wayne first saw the site, he declared: “So this is where God put the West.” Millions would agree.

Over the next 25 years, John Ford would go on to shoot six more westerns in Monument Valley: My Darling Clementine (1946), Fort Apache (1948), She Wore a Yellow Ribbon (1949), The Searchers (1956), Sergeant Rutledge (1960) and Cheyenne Autumn (1964). In addition to introducing the valley’s spectacular scenery to an international audience, each movie pumped tens of thousands of dollars into the local economy.

Goulding’s Trading Post is now a sprawling complex of 73 motel rooms, a campground, and a souvenir shop. (Harry Goulding died in 1981, Mike in 1992.) The original 1925 trading post has been turned into a museum. Goulding’s Trading Post Museum is both a showcase of varied artifacts and a glimpse into a bygone era.

Goulding’s Trading Post Museum is comprised of several different areas. The first is the Trading Post Bull Pen, where the locals would bring their goods to trade for items: kitchen wares, canned goods, material and threads, and even guns.

The next section of the museum is the Ware Room where surplus and supplies were stored: bags of raw wool, crates of coffee, and saddles. Today the Ware Room is filled with photographs of the early days at Goulding’s and pictures of local Navajos from the 20th Century.

The Josef Muench Room boasts a variety of artwork and photography, principally, that of famous photographer and close Goulding friend, Josef Muench.

The Movie Room was originally built as the mess hall for the crew of The Harvey Girls; today it is filled with movie stills, call sheets, and posters. Always playing in the Movie Room is a classic John Ford/John Wayne film.

The Living Quarters is upstairs and has been restored as closely as possible to how the Goulding’s home appeared in the late 1940s and early 50s.

Captain Nathan Brittles’ Cabin, also called John Wayne’s Cabin, is located just behind the museum. In actuality, it was Mike Goulding’s potato cellar, where she stored her fruits, vegetables, and other perishables.

Enjoy breakfast, lunch, or dinner at Goulding’s Stagecoach Dining Room while experiencing the beauty, culture, and history of the true American West. The dining room offers Navajo and American Southwestern cuisine in a historical, awe-inspiring setting.