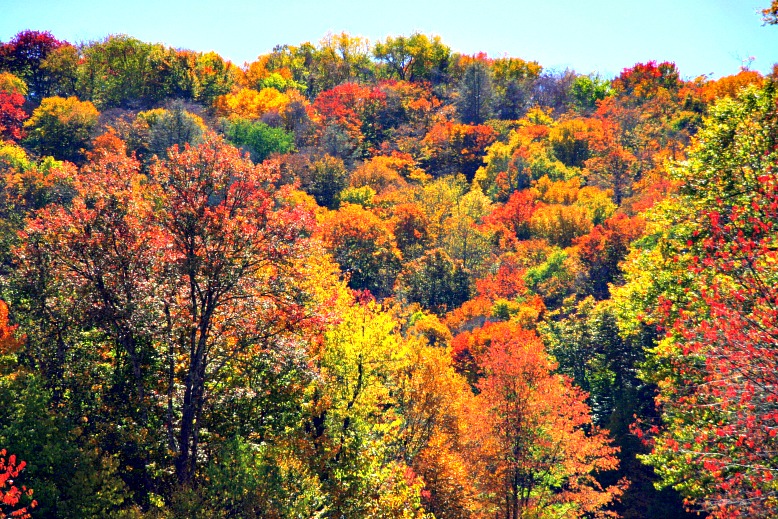 This is starting out as a complicated season for leaf peepers.

As the Northeast sweltered through record October heat, parts of the Rockies and northern Plains were buried under wildly early snow—and we drove through it from Great Falls to Billings. Late heat and early cold can stifle some of the most photo-worthy foliage, but large swaths of the country will soon be engulfed in the brilliant yellows, oranges, and reds ahead of the approaching winter.

Forested areas host a variety of tree species. The evergreens shed leaves or needles gradually as their name suggests. The leaves of deciduous varieties change from green to yellow, orange, or red before letting go entirely.

Certain species begin to produce another pigment, anthocyanin, when the seasons begin to change. This is what turns forests red and orange. Anthocyanin is also responsible for the red, purple, black, and blue colors in certain foods high in antioxidants (think raspberries, purple cauliflower, and black rice). This crimson pigment allows trees to continue storing just a little more sugar and nitrogen to have on hand for the next year.

Some areas of the country are more likely to experience those bright red and orange leaves than others. New England is a perennial fall destination because of its abundance of tree species contributing bright colors.

The best color displays occur in forests that have a diversity of species and trees that have the tendency to turn red.

The progression of fall creates a wave of color across the country with grassy plains and farmlands in the Midwest drying up, and the trees of the East Coast rolling from green to yellow/orange/red to brown.

Leaf peepers prowl different parts of the country to find their own special spots for the best fall colors. An annual photo-foraging is like a Christmas present as leaf peppers run around the country unwrapping all these presents.

Dazzling colors can be seen in numerous regions outside New England. Wisconsin, Michigan, and Minnesota are great places to go with forests that blend bright yellow birch, beech, and aspen with red maple. Farther south, a mix of oak and hickory forests in Arkansas provides stunning views, especially at higher elevations in the Ozarks.

Even as far south as New Mexico, yellow oaks can be seen on mountainsides, along with sporadic flashes of red maples.

Moving west, yellow dominates. Western U.S. forests are predominantly evergreen, where species of juniper, spruce, and fir are better adapted to the more extreme temperature and moisture shifts. The deciduous trees in the West, including aspens, tend to display strong yellows.

There are pockets of beautiful color all over the West but there aren’t a lot of people there. So the majesty can go unseen in some places.

Moderate stress, such as changing seasonal temperatures and the amount of daylight, helps induce the onset of leaf-color change, but more severe stress can mute the vibrancy of autumn’s palette. Drought limits the ability of tree leaves to produce sugars which can also lead to early leaf drop.

But this season is expected to be superb. In New England, low evening temperatures have helped jump-start the fall colors. This will eventually wave down the eastern United States, down through Appalachia and beyond.

We wish you luck in your leaf-peeping endeavors. Don’t wait too long because before you know it, the best of fall foliage season will quickly pass only to find solace in pumpkins and corn mazes.

October, baptize me with leaves! Swaddle me in corduroy and nurse me with split pea soup. October, tuck tiny candy bars in my pockets and carve my smile into a thousand pumpkins. O autumn! O teakettle! O grace!