Cabernet Franc is a parent to Cabernet Sauvignon (the other is Sauvignon Blanc). The crossing occurred sometime during the middle 1600’s around southwestern France (Bordeaux). 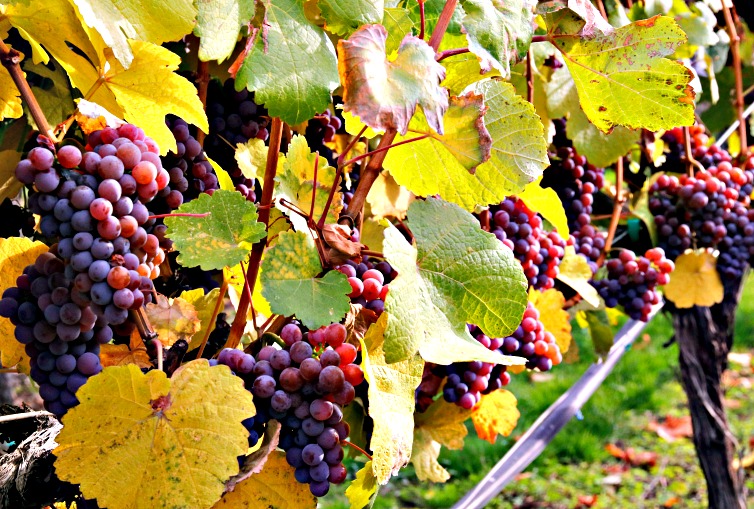 Franc(ly) my dear, I DO give a damn…about good wine.

Puns aside. Yes, you guessed it, my focus today is on that black grape, Cabernet Franc—a peppery little number that needs attention and can demand it when given the limelight and not blended with Cabernet Sauvignon, Merlot, Malbec, and Petit Verdot which used to be its only end.

Cabernet Franc’s flavor is intriguing. On the plus side, it has lots of ripe raspberry-like flavors, sometimes with hints of anise. But when Cabernet Franc is grown in cool areas, it tends to be more herbaceous, sometimes leaning toward green bell pepper, a negative characteristic for many fans of red wine.

While ironically overshadowed by Cabernet Sauvignon, Cabernet Franc remains the unexpected parent of Cabernet Sauvignon (having been partnered with Sauvignon Blanc), which is believed to have been crossed during the Middle Ages near the Basque region of northern Spain. The grape itself is rather thin-skinned and prefers well-drained soil structures for optimal ripening. When ripeness levels are lacking the grape’s green themes, which steer towards green veggie aromas and bell pepper streaks, tend to dominate. However, when it’s on, it is on and wows with a medium body, solid acidity, medium fine tannins, a lively, welcoming personality and savory flavors.

Over the years, Cabernet Franc has been successfully grown in places like Australia, California, Chile, Italy, South Africa, Washington State—and the Okanagan Valley of British Columbia.

While used in Bordeaux more as a blending grape, as a single variety Cabernet Franc is a pillar of the Loire Valley. In the Okanagan Valley, where its embraced as much as anything for its ability to ripen earlier than Cabernet Sauvignon, it has also been used for blending, although in recent years its popularity as a stand-alone has also been steadily on the rise.

Compared to the brawny characteristic style of many Cabernet Sauvignons, Cabernet Francs tend to be lighter in color and a bit fruitier and softer on the palate. The main big difference between the two varietals is that most Cabernet Francs are not made for ageing—they’re meant to be drunk young.

Is the Cabernet Franc grape the next red wine trend waiting to happen?

Cabernet Franc is considered by many to be the iconic red grape for British Columbia because of its ability to produce wines more complex and intriguing than its big brother Cabernet Sauvignon.

As optimistic as that is, as of the 2014 BC Wine Acreage Report, Cabernet Franc only accounts for 10.44 percent of all red grape varieties and a mere 5.32 percent of all grapes planted in the province with a total of 546.13 acres. Compared to Merlot at 29.90 percent and Pinot Noir 20.53 percent respectively, Cabernet Franc rank fourth below Merlot, Pinot Noir, and Cabernet Sauvignon.

Add to this the Okanagan’s natural beauty (it’s a hallowed summer-vacation spot for Canadians), its wide range of non-wine-related things for the whole family to do— from riding the century-old Kettle Valley steam train and swimming in those pristine lakes to biking and hiking, and its lush orchards with juicy peaches, apricots, and cherries—and you’ve got a wine country experience like no other.

Now is the time to taste your way through the Okanagan Valley of British Columbia.

Let us celebrate the occasion with wine and sweet words.