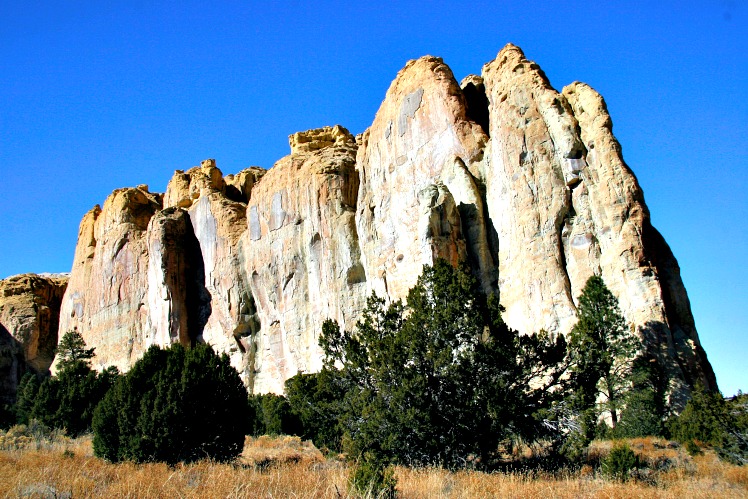 Rising 200 feet above the valley floor, this massive sandstone bluff was a welcome landmark for weary travelers. A reliable year-round source of drinking water at its base made El Morro a popular campsite in this otherwise rather arid and desolate country.

At the base of the bluff—often called Inscription Rock—on sheltered smooth slabs of stone, are seven centuries of inscriptions covering human interaction with this spot.

This massive mesa point forms a striking landmark. In fact, El Morro means “the headland.” From its summit, rain and melted snow drain into a natural basin at the foot of the cliff, creating a constant and dependable supply of water. The pool also attracts birds, coyotes, deer, and other wild creatures.

A pre-Columbian route from Acoma and the Rio Grande valley to the Zuni pueblos led directly past El Morro, probably marking it as a favored camping site for prehistoric travelers.

Beginning in the late 1500s Spanish, and later, Americans passed by El Morro. While they rested in its shade and drank from the pool, many carved their signatures, dates, and messages. Before the Spanish, petroglyphs were inscribed by Ancestral Puebloans living on top of the bluff over 700 years ago.

The softness of the light-colored sandstone made it easy to carve pictures, names, dates, and messages. Ironically, that is also the reason that the famous inscriptions are slowly disappearing.

Today, El Morro is one of New Mexico’s smaller national monuments, hidden away in forested, high elevation (7,219 feet), little-traveled land towards the northwest of the state. Some of the surroundings are volcanic, including nearby El Malpais National Monument on the far side of the continental divide, and other parts are featureless grassy plains.

Translated, the inscription proclaims: “Passed by here, the expedition leader Don Juan de Oñate, from the discovery of the Sea of the South the 16th of April of 1605.”

Not the first Spaniard to see the mesa, Diego Pérez de Luxan, chronicler of an exploring expedition led by Antonio de Espejo, recorded in his journal that the party had camped in March 1583 at a location he called El Estanque de Peñol (The Place at the Great Rock). However, no record of the expedition’s passing has been found on the mesa.

The Spanish reigned in New Mexico for nearly 200 years. After being driven out by the Pueblo Rebellion of 1680, they took back control twelve years later and ruled for generations.

General de Vargas recorded his victory in this way: “Here was the General Don Diego de Vargas, who conquered for our Holy Faith and for the Royal Crown all of New Mexico at his own expense, year of 1692.”

The final inscription in Spanish was dated 1774. The Spanish lost control of their North American territories to the Mexicans who in turn lost them to the United States during the Mexican-American War of the 1840s. At the close of the Mexican War in 1848, New Mexico became a U.S. territory, and the arrival of the Americans opened a new chapter in El Moro’s long history.

In 1849, Lt. James Simpson, an Army topographical engineer, and Richard Kern, an artist, were the first Americans to carve their names on El Morro. More significantly, however, Kern sketched many of the inscriptions and brought them to national attention.

After Simpson and Kern, many American wagon trains carrying emigrants to California passed and, as the Anasaziand Spaniards did before them, they left a record of their presence.

The main thing to see is Inscription Loop Trail, a half mile walk past numerous Spanish and Anglo inscriptions, as well as pre–historic petroglyphs.

Before venturing out be sure to view the short informative film in the visitor center and pick up a copy of the trail guide to assist you in spotting and understanding the various inscriptions.

You can continue your walk up to the top of the mesa for some great views and to see the partially-excavated ruins of an Ancestral Puebloan village.

Although all can be seen in just a couple of hours, El Morro is an unusual and evocative place, well worth a detour to visit.