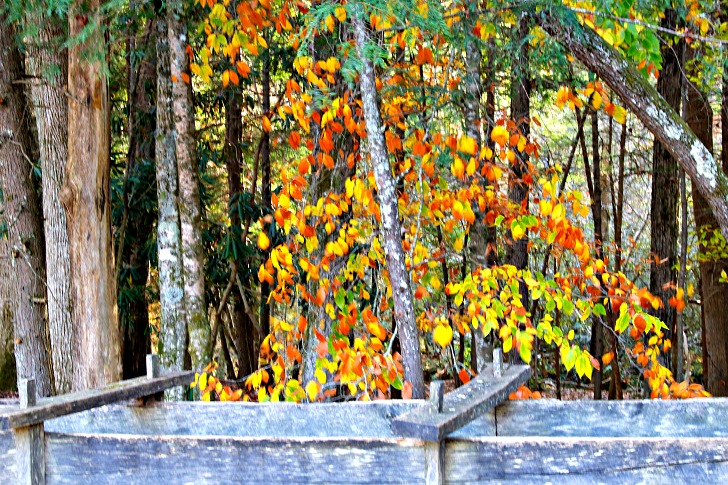 Straddling the border between North Carolina and Tennessee in the ancient Southern Appalachians, Great Smoky Mountains National Park is almost as renowned for its well-preserved pioneer settlements as for its natural beauty. More than 90 historic structures—homes, barns, churches, and gristmills—have been preserved here, including the largest collection of log structures in the eastern United States.

Cades Cove, on the beautiful Tennessee side of the park, offers the widest variety of historic buildings of any area in the national park. Cades Cove is a broad, verdant valley surrounded by mountains and is one of the most popular destinations in the Great Smoky Mountains National Park.

The valley has a rich history. For hundreds of years Cherokee Indians hunted in Cades Cove but archeologists have found no evidence of major settlements.

Settlers came to this area in 1819, migrating here from Virginia. Later they came from North Carolina, enriching their culture from the old world with knowledge gained from the Indians. They cleared the land for farming and set about building log houses, barns, smokehouses, and corncribs. By 1830, the population had already grown to 271 and by the 1850s the population of Cades Cove peaked at 685, occupying 137 households.

With this population growth the soil quality deteriorated. The opening states of the West brought the opportunity of more fertile frontiers and by 1860 only 269 people remained.

Largely isolated by the mountains that surrounded them, the residents of Cades Cove were by necessity a close-knit, hardworking, and self-sufficient group. Plentiful game, such as deer and bear, provided meat to accompany garden vegetables. Over the years mills, churches, and schools were built to support the growing community.

In 1927, the state governments of North Carolina and Tennessee began buying up land for a national park. Many of the Cove’s families willingly sold their properties, but others initially fought the effort. Members of several families signed life leases that allowed them to remain on the land during their lifetime.

Today the National Park Service maintains the location as it looked in the 1800s. An 11-mile Loop Road circles the Cove, with stopping-off areas at several homesteads, three churches, a working gristmill, and a number of trails and overlooks.

Built in 1972,the Visitor Center is a place for visitors to obtain information and buy books, post cards, maps, guides, batteries, and other items.

Large barns were common in the Cove where farmers needed shelter in the cold months for livestock. The overhang in cantilever barns such as the one here provided shelter for animals as well as storage space for farm equipment.

A second barn in the Mill Area with a drive-through in the center and stalls on either side, was more typical in East Tennessee than the cantilever barn. Two men with pitchforks, one on a wagon of hay in the drive-through and the other in the loft, could transfer the hay to the loft in a short time. The drive-through sometimes served as a storage place for farm animals.

We had visited twice previously; over 30 years ago and about 12 years ago when we gave up due to gridlock on the loop road. On that day, the traffic was heavy, bumper to bumper to times. On this visit, we purposely avoided the weekend.

We’ve been to many frontier museums and exhibits, but Cades Cove is unique in that an entire valley has been preserved, allowing a rare opportunity to see what the pioneers saw generations ago.

From our home base at River Plantation RV Park in Sevierville, we traveled south on US-441 to Pigeon Forge; at Traffic Light #3 we turned southwest on US-321 to Townsend; turned south (left) on SR-73; west on Laurel Creek Road to Cades Cove Loop Road. We returned home via Townsend and Marysville on US-441 to Sevierville.