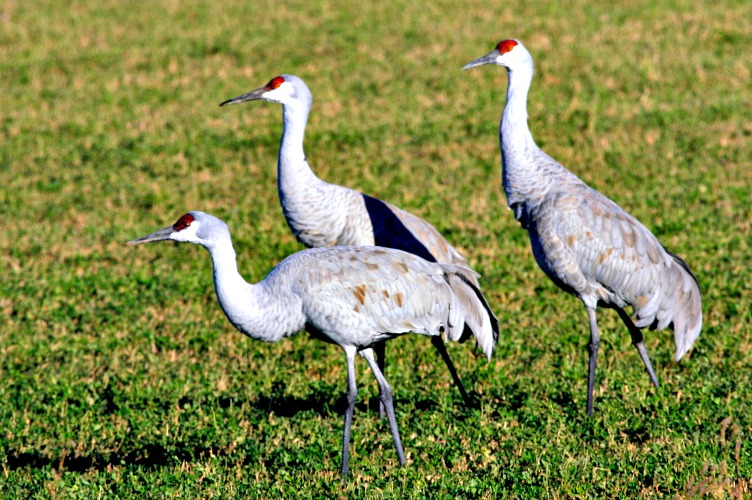 It was a frigid November morning at New Mexico’s Bosque del Apache National Wildlife Refuge where we had joined dozens of ardent wildlife photographers and nature enthusiasts, lined up tripod-to-tripod and scope to scope, ready and waiting for the action to begin.

We were standing on an observation platform called Flight Deck overlooking a network of fields and marshes teeming with thousands of sandhill cranes and snow geese that pause here to feed and rest during their annual migration south.

Talk about a great migration! Every year starting in early November, some 10-15,000 sandhill cranes, 20-30,000 snow geese, nearly 40,000 ducks, and even a few hawks and bald eagles migrate to the Bosque del Apache. This annual event also attracts birders, photographers, and nature lovers of all kinds who also migrate to the Bosque to enjoy this spectacle of nature.

Situated on the Rio Grande just a few miles off Interstate 25 south of Socorro (between Albuquerque and Las Cruces) in the tiny town of San Antonio, the 57,000-acre refuge was established in the 1930s to protect the sandhill crane. The majestic 4-foot-tall crane had nearly vanished along the Intermountain West Corridor, a vital north-south flyway for migratory waterfowl and many other birds.

For instinctive reasons known only to the birds, a sunrise “fly out” en masse is a daily routine. As is a “fly in” at sunset when the flocks return to the shallow marshes after a day of feeding on corn and grain crops farmed on more than 1,300 acres, mostly at the northern end of the refuge.

“They could go any minute now,” said the photographer next to us. An amateur wildlife photographer, here as a member of a photo tour group. “They take off all at once…thousands of them,” he adds, “and it’s really unbelievable.”

As we watched and waited, the sun inched over the eastern horizon illuminating a wispy fog rising from the marsh several hundred feet away. Then, without any discernible signal, it happened. In virtual unison thousands of snow geese erupted in a thunder of wings, and in a blur filled the sky as they flew low over head before soaring northward to spend the day feeding in the fields.

Sandhill cranes then started to walk. Others lowered their heads, long necks stretched out in front of them, almost off-balance. This signal is followed by quick steps, the awkward first wing flaps and flight.

It’s unbelievable how they take off all at once, thousands of them. Nothing we’ve ever seen in nature compares to it. It is the rare human who is not stirred to awe and excitement as thousands of birds soar scarcely 20 feet overhead.

Then in the late afternoon they streak the sky and return to the water to roost for the night. The afternoon fly-in is almost as enjoyable to observe as the morning fly-out.

The spectacular sunrise had also made us forget for a time the freezing chill as we retreated to the warmth of our toad.

Once warmed up, we drove the 15-mile one-way auto loop road and hiked the trails and observed large groups of snow geese and cranes, thousands of ducks of many varieties, hundreds of Canada geese, dozens of hawks, eagles, blackbirds, crows, roadrunners, sparrows, grebes, coots, and other birds along with occasional reptiles, amphibians and mammals, such as mule deer, coyotes, and jackrabbits.

The refuge’s dirt roads are well maintained and RVs should have no trouble driving on them. If 15 miles sounds too long, you can cut your tour short by taking a two-way cutoff and driving on one section—the 7-mile Marsh Loop or the 7.5-mile Farm Loop.

Bosque del Apache National Wildlife Refuge is open year-round from one hour before sunrise until one hour after sunset. The one-day entry fee is $5 per vehicle including all occupants; an annual pass is $25. Golden Age and other federal passes are accepted.

I saw them first many Novembers ago and heard their triumphant trumpet calls, a hundred or more sandhill cranes riding south on a thermal above the Rio Grande Valley, and that day their effortless flight and their brassy music got into my soul.