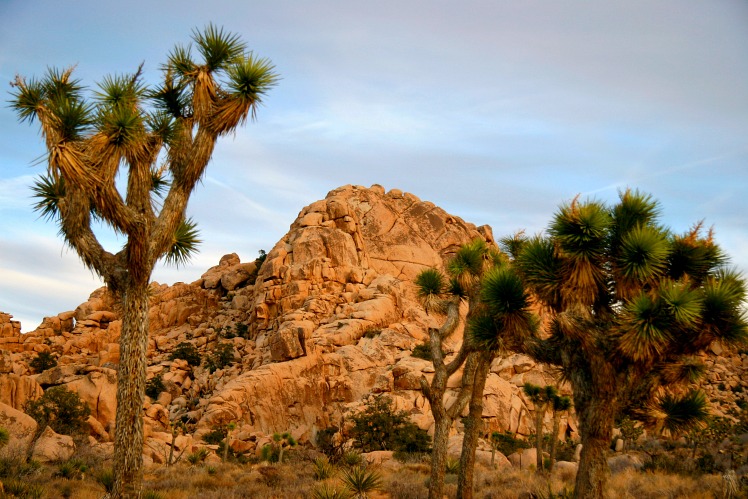 It should come as no surprise that 3 million people visit Joshua Tree National Park each year. California’s High Desert is a veritable wonderland of unique desert plant life, beautifully bizarre rock formations, and dreamy views, after all.

Located near the Greater Palm Springs area, about a two-and-a-half-hour drive from San Diego, the park is best known for the oddly shaped Joshua trees which actually aren’t trees at all; they’re yucca plants.

If you’ve been itching to visit, now’s a great time. The park recently celebrated its 25th anniversary. According to the National Park Service, on October 31, 1994, Joshua Tree National Monument was elevated to national park status as part of the Desert Protection Bill. The bill also added 234,000 acres to the park, bringing the total acreage of the park to nearly 800,000.

Joshua trees are rock stars in the plant world when it comes to their ability to survive in scorching heat, freezing cold, and environments with little water. They can be found in the Mojave Desert at elevations of 2,000 to 6,000 feet.

Technically, Joshua trees are not trees, but plants. In 2011, The American Journal of Botany published a report confirming that there are two distinct varieties of Joshua trees: brevifolia and a smaller plant, jaegeriana McKelvey. The plant is a member of the agave family.

It’s uncertain how the Joshua tree got its name though it is thought to have originated with the Mormon pioneers heading west. The strange, contorted branches, it is said, made the sojourners think of the Biblical figure Joshua pointing westward to the “promised land”. Native Americans call them “humwichawa,” among other names. They are also referred to as yucca palms, and in Spanish they are called izote de desierto, “desert dagger.”

Native Americans used the plants’ tough leaves to make baskets and sandals. They used flower buds and raw or roasted seeds for food.

Beyond the trees there’s so much to see including incredible sunsets and stellar views of the Milky Way. There are rugged mountains of twisted rock and exposed granite monoliths. Huge, rounded boulders pile up on top of each other and rectangular blocks thrust up from the ground at sloping angles, forming steep precipices.

The hiking is fantastic! There is a variety of self-guided nature trails and longer hikes that offer different perspectives of the park. The aptly named Jumbo Rocks has a half-mile nature walk to Skull Rock and the Barker Dam walk (1.1 mile loop) is interesting in terms of the cultural history of the area.

Plus, there’s no shortage of desert critters including 3-foot-long lizards called chuckwallas, bighorn sheep, leaf-nosed bats, and red-tailed hawks. Also keep an eye out for American kestrels, kangaroo rats, kit foxes, and black-tailed jack rabbits. It’s not uncommon to see coyotes, rattlesnakes (five types of them make their home in the desert), and tarantulas, too. If you’re really lucky, you may spot a desert tortoise or a bobcat.

With eight different campgrounds offering about 500 developed campsites, Joshua Tree offers a variety of options for RVers. There are no hookups for RVs at any campground in Joshua Tree. Black Rock (99 sites) and Cottonwood (62 sites) have RV-accessible potable water and dump stations. At Hidden Valley (44 sites) and White Tank (15 sites) RVs may not exceed a combined maximum length of 25 feet. Additional campgrounds include Belle (18 sites), Indian Cove (101 sites), Jumbo Rocks (124 sites), and Ryan (31 sites).

name, where the streets have no name…