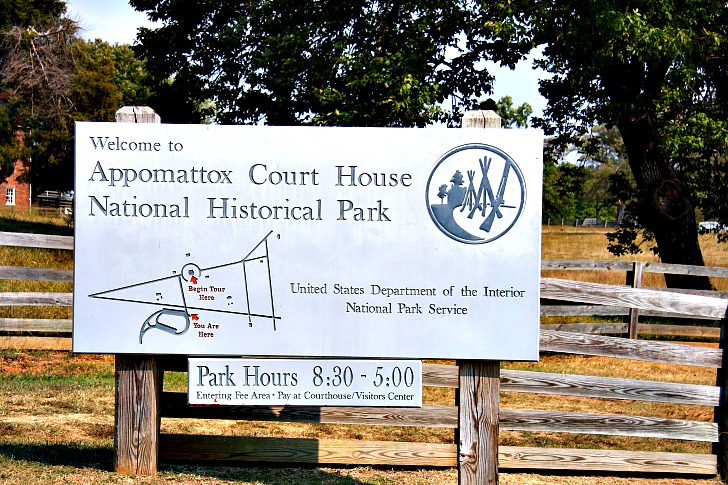 The Appomattox Court House National Historical Park commemorates the heroic acts which took place in April of 1865 in this, the original village, to bring about the end of the Civil War. Walk the old country lanes where Robert E. Lee, Commanding General of the Army of Northern Virginia, surrendered his men to Ulysses Grant, General-in-Chief of all United States forces, on April 9, 1865. Imagine the events that signaled the end of the Southern States’ attempt to create a separate nation.

Thanks to the fact that it was all but deserted after the Civil War, it looks a lot like it must have when Robert E. Lee surrendered the Army of Northern Virginia to Ulysses S. Grant.

The walking tour allows you to see all buildings which are original to the site, and have been restored to their original condition. The highlight of the Park is the McLean house where Generals Lee and Grant crafted and signed the terms of surrender, bringing an end to the bloodiest chapter of U.S. history.

Many people think that the meeting between the two generals took place in the courthouse, which is now the park’s Visitor Center, but the historic rendezvous really happened in the parlor of the McLean house nearby. The reason for the confusion is that the town’s name was Appomattox Court House. If you spell courthouse as two words, it means the town. Many county seats in this area had Court House as part of their names, and some still do, like Amelia Court House. But if you spell courthouse as one word, then you’re talking about the building.

Approximately 9,000 men under Gordon and Fitzhugh Lee deployed in the fields west of the village before dawn and waited. The attack, launched before 8:00 a.m. and led by General Bryan Grimes of North Carolina, was initially successful.

The outnumbered Union cavalry fell back, temporarily opening the road. But it was not to be.  Union infantry began arriving from the west and south, completing Lee’s encirclement.  Meanwhile, Longstreet’s troops were being pressed from the rear near New Hope Church, three miles to the east. General Ulysses S. Grant’s goal of cutting off and destroying Lee’s army was close at hand.

Bowing to the inevitable, Lee ordered his troops to retreat through the village and back across the Appomattox River. Small pockets of resistance continued until flags of truce were sent out from the Confederate lines between 10:00 and 11:00 a.m. Rather than destroy his army and sacrifice the lives of his soldiers to no purpose, Lee decided to surrender the Army of Northern Virginia.

Although not the end of the war, the surrender of Lee’s Army of Northern Virginia set the stage for its conclusion. Through the lenient terms, Confederate troops were paroled and allowed to return to their homes while Union soldiers were ordered to refrain from overt celebration or taunting.

These measures served as a blueprint for the surrender of the remaining Confederate forces throughout the South. Although a formal peace treaty was never signed by the combatants, the submission of the Confederate armies ended the war and began the long and difficult road toward reunification.

Visiting Appomattox Court House National Historical Park is largely a self-guiding experience. For this reason it is recommended that you begin your tour at the visitor center and get a map of the park. The visitor center is in the reconstructed courthouse building.

Although the park consists of nearly 1700 acres, most visitors focus on the old village. Using your cell phone you can learn more about nine specific sites around the park. There are four cell phone sites in the old village and five sites beyond the village core. These sites can teach about the military activities that occurred here in 1865 and about the people and county that played host to these events.

Visitors will not be charged an admission fee to visit the park.

The war is over — the rebels are our countrymen again.