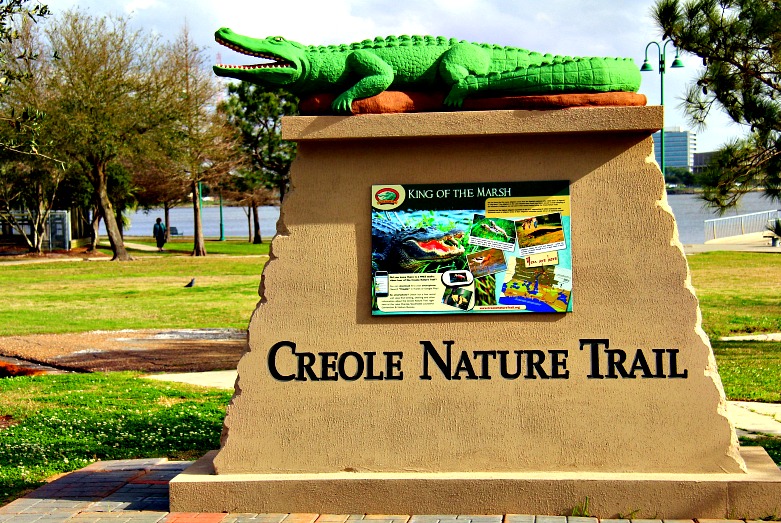 Water—seemingly everywhere—is a big part of the Creole Nature Trail experience. Part of America’s Byway’s system, this All-American Road is known for its distinct waters, pristine blue skies, and plenty of wildlife and bird watching.

We used A+ Motel & RV Park on Highway 27 in Sulphur, Louisiana, as our home base while driving the Creole Nature Trail and exploring the area. Conveniently located on the trail, A+ Motel & RV Park earns its name with 134 full-hookup sites, neatly trimmed grounds with a stocked fishing pond, two laundry/shower houses, and two pools, including an adults-only pool with a covered patio and a 75-inch flat-screen TV. New in 2008, A+ is big rig friendly with pull-through and back-in sites and conveniently located 30/50-amp electric service, water, and sewer connections, and cable TV.

There are two exits onto the trail from I-10; one near our home base at Sulphur, and, to the east, near Lake Charles. While both towns boast the usual stores, fuel stations, and cultural attractions like museums, casino gaming, and restaurants serving Cajun cuisine, we quickly drove into wild Louisiana wetlands. This is the Louisiana Outback.

We head south, passing through small towns, then farms, and, just past Hackberry, the landscape becomes meandering waterways with islands of grass as far as the eye can see. The road courses along the west side of brackish Calcasieu Lake. At 8 miles wide and 18 miles long, the lake earns its “Big Lake” nickname. Along the roadway, brilliant orange, daisylike flowers flutter in the breeze.

Our first stop is Sabine National Wildlife Refuge, at 125,000 acres, the largest along the trail. We pull into an area marked “Recreation” where a dozen locals are fishing.

Just a hop down the road, we stop at the Blue Goose Trail and wildlife overlook, a paved 1-mile walking trail and raised wildlife viewing platform. Atop the tower, the breeze through the grasses and bird tweets, cheeps, and squawks are the only sounds.

The Creole Nature Trail is filled with prairie grasslands and miles of freshwater, brackish, and saltwater wetlands rich in marsh grasses, crustaceans, and small fish, making it a key stopover for birds passing through the Central and Mississippi flyways. In fact, this area boasts more than 5 million migratory waterfowl and 400 species of birds, making it one of the top birding spots in the country.

While visitors will see birds and the occasional alligator along the road, the best way to explore the Creole Nature Trail is to hike refuge trails and walkways. We walked the Wetland Walkway, a raised, 1.5-mile-long boardwalk that wends through 6-foot-tall grasses to a two-story observation tower with a sweeping view.

The sun, now fully emerged from the clouds, makes me glad I brought along my Tilley, a broad-brimmed hat. We spot roseate spoonbills, great white egrets, great blue herons, tricolored herons, white ibis, and red-winged blackbirds, and, while there are Alligator Alley warning signs, no gators.

Another stop is Holly Beach, a community of beachfront homes leveled in 2005 by Hurricane Rita. Like a phoenix, the colorful stilted beach cabins have been rebuilt, and this “Cajun Riviera” is once again popular for sunbathing, swimming, and shelling.

On your next adventure out, consider a scenic drive on the Creole Nature Trail; you never know what may be lurking ’round the next bend.