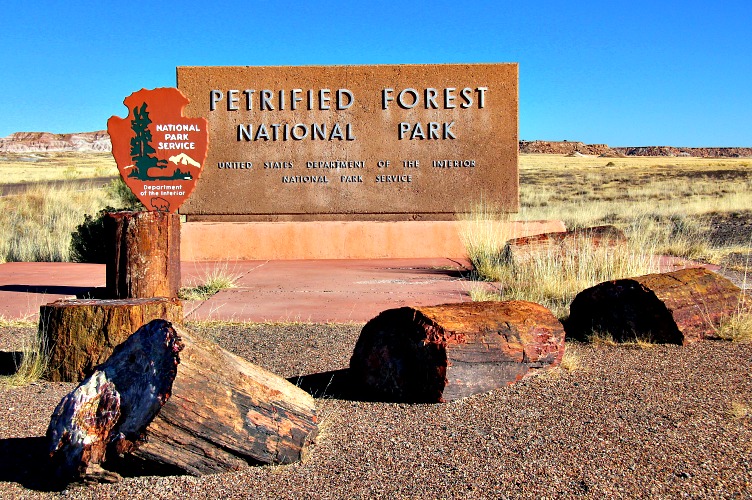 Petrified Forest is known for its treasure trove of fossilized logs, exposed after eons of erosion by wind and water. About 60 million years ago, tectonic action pushed the Colorado Plateau upwards, exposing the layers of rock containing the park’s Triassic fossils.

The park is composed of two sections: the north section is a colorful badlands called the Painted Desert, and the southern section contains most of the petrified wood.

The park consists of a 28-mile road that offers numerous overlooks and winds through the mesas and wilderness. Visitors can also choose to hike a variety of trails ranging from easy to difficult.

The land below is awash in burnt sienna, deep maroon, dusty purple, and sprinkled here and there with green plants.

Petrified Forest, a surprising realm of fascinating landscape and science, was set aside as a national monument in 1906 to preserve and protect the petrified wood for its scientific value. The Painted Desert was added later, and in 1962, the entire monument received national park status.

It is recognized today for having so much more, including a broad representation of the Late Triassic paleo-ecosystem, significant human history, clear night skies, fragile grasslands ecosystem, and unspoiled scenic vistas.

More than 200 million years ago, flourishing trees and vegetation covered much of this area of northeastern Arizona. But volcanic lava destroyed the forest, the logs washed into an ancient river system and were embedded into sediment comprised of volcanic ash and water. Oxygen was cut off and decay slowed to a process that would now take centuries.

Minerals, including silica dissolved from volcanic ash, absorbed into the porous wood over hundreds and thousands of years, and crystallized replacing the organic material as it broke down over time. Sometimes crushing or decay left cracks in the logs. Here large jewel-like crystals of clear quartz, purple amethyst, yellow citrine, and smoky quartz formed.

Erosion set the logs free millions of years later, revealing the petrified wood made mostly of quartz—that visitors to the park come to see.

The best way to enjoy and experience Petrified Forest National Park is on foot. Designated trails range in length from less than a half-mile to almost three miles.

Petrified Forest National Park stretches north and south between I-40 and U.S. Highway 180. There are two entrances into the park. Your direction of travel dictates which entrance is best to use.

Westbound I-40 travelers should take Exit 311, drive the 28 miles through the park and connect with Highway 180 at the south end. Travel 19 miles on Highway 180 North to return to I-40 via Holbrook.

Eastbound I-40 travelers should take Exit 285 into Holbrook then travel 19 miles on U.S. Highway 180 South to the park’s south entrance. Drive the 28 miles north through the park to return to I-40.

Many of the features at Petrified Forest are on a scale best appreciated by leaving the car. Plan enough time to walk among the fossil logs and Painted Desert badlands.

For a half-day visit, follow the park road from the Rainbow Forest Museum toward Pintado Point. If you can stay longer, include a walk to Agate House, take the trail into the Blue Mesa badlands, and consider a hike in the Petrified Forest National Wilderness Area.

The way in which many Paleozoic life forms disappeared towards the end of the Permian Period brings to mind Joseph Hayden’s Farwell Symphony where, during the last movement, one musician after the other takes his instrument and leaves the stage until, at the end, none is left.